Story for panoramas on Vienna#

by Stas Sedov and Dmitry Moiseenko, members of the AirPano Team that is member of the global-geography Consortium.

Vienna, one of the finest and most famous cities in the world, stretches out to the eastern part of Austria at the bottom of the Alps and on both sides of the Danube River. Its history dates back to the Celts, who established a settlement here known as Vindobona. In the middle of the 1st century, the Romans built a military camp in this strategically favorable area. A century later the famous Roman Emperor Marcus Aurelius Antoninus died in Vindobona. In the 4th century Christianity was introduced, and in the 12th century English King Richard the Lionheart was captured in Vienna. 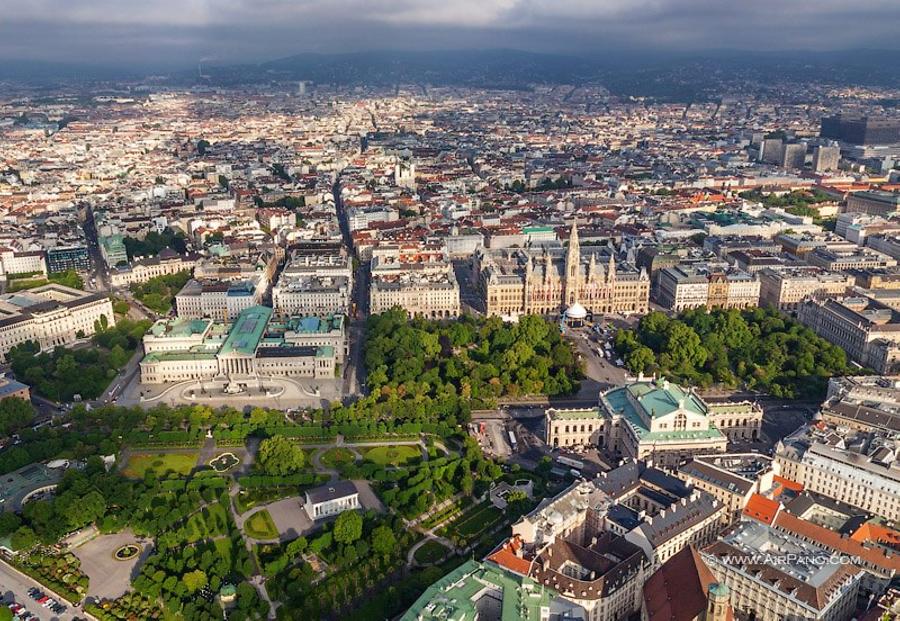 Vienna's history is unique and eventful; even a brief mentioning of some historic events will take more than one page to write. All of them were important in one way or another for the development of the city and its culture, and nowadays the city represents a solemn reminder of its imperial period.

Vienna became the resident city of the Habsburg Dynasty, one of the most influential monarchy dynasties of Europe during the Middle Ages and the Renaissance period. Eventually the city of Vienna grew to become the capital of the Holy Roman Empire. Afterwards, the city received the title of capital of the Austro-Hungarian Monarchy. This gave Vienna a surge in its development, which is now reflected in its image. Although Vienna's landmarks, famous palaces, and castles were built at different times and represent a mixture of architectural styles that range from Gothic to Renaissance, they all blend together into one harmonious ensemble, bearing vivid imprints of the once royal imperial glamour. 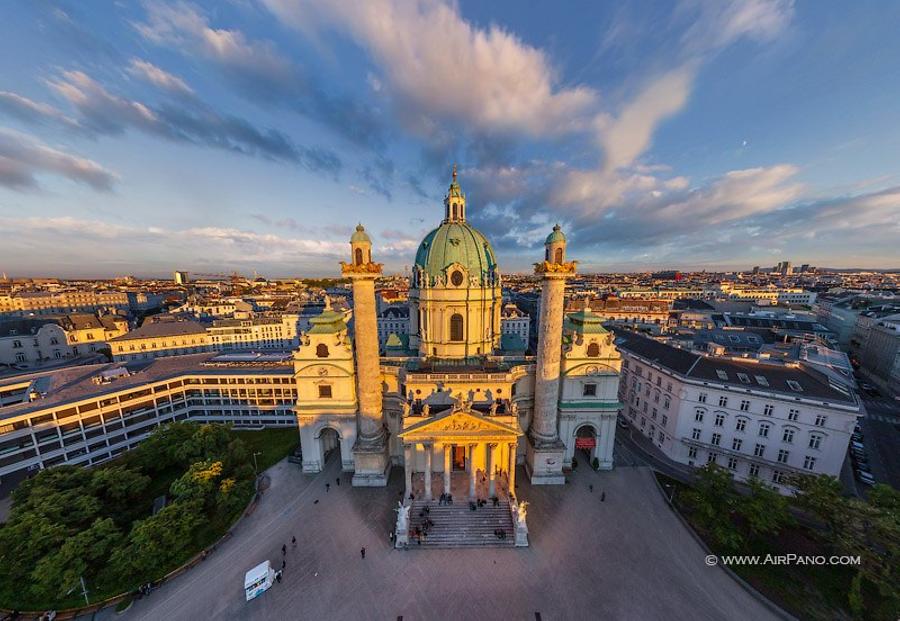 The heart of Vienna is Ringstrasse, or simply, the Ring. It is a circular street surrounding the Old City. The boulevard and the buildings were primarily meant to show the power of the Habsburgs and the Austrian Empire. At the same time the history and experience of Paris was taken into consideration: specifically the fact that the wide streets don't allow revolutionaries to build barricades. Saint Stephen's Cathedral, Hofburg Palace, the Opera House, the Parliament, as well as many other landmarks can all be found on the Ringstrasse.

Other magnificent and solemn palaces, such as the Belvedere Palace and the Schönbrunn Palace, are located away from the center. It is not surprising because they were built as summer country residences for the governing elite of Vienna. In addition to the classical heritage, the city is packed with astonishing modern architecture. The shape of the Leopold Museum is a rectangular parallelepiped; the building is faced with shell limestone. The facade of Hundertwasser House is painted with bright colors and is absolutely asymmetrical. The 252-meter Danube Tower with rotating platforms is the second tallest building in the country. The1-kilometer-long Karl Marx-Hof building is the longest apartment building in the world. The distance from one end to another is equal to four tram stops. Overall, it seems there are no limits to the imagination of the modern architects of Vienna! 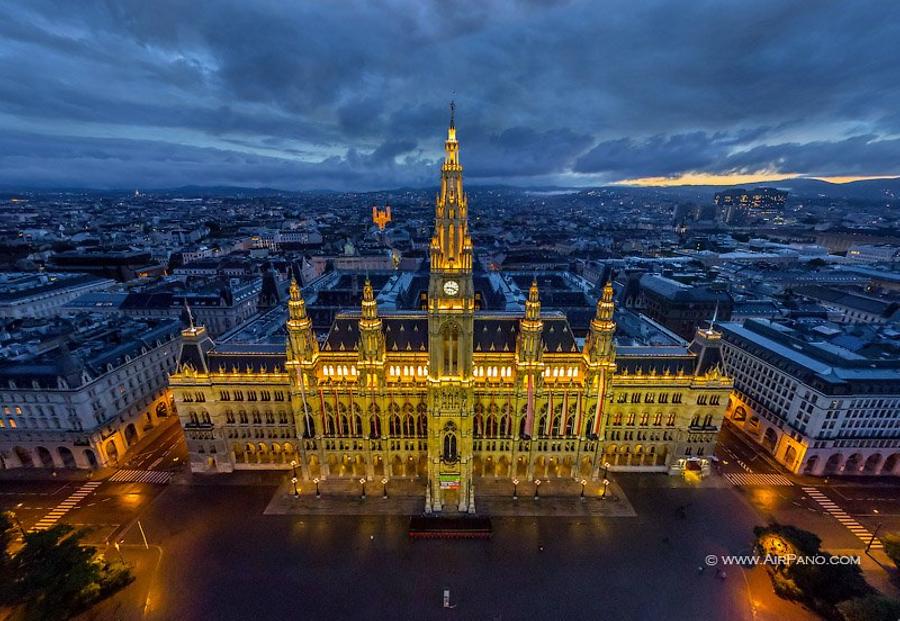 Yet, the Austrian capital is still an extremely green city. Vienna is one of the "greenest" metropolises in the world. Parks and woods, including the famous Vienna Woods that share a border with the East Alps, use about 45% of the total area of the city, which amounts to 415 square kilometers. In addition to that, 18% of the land is allocated to the farms and vineyards. 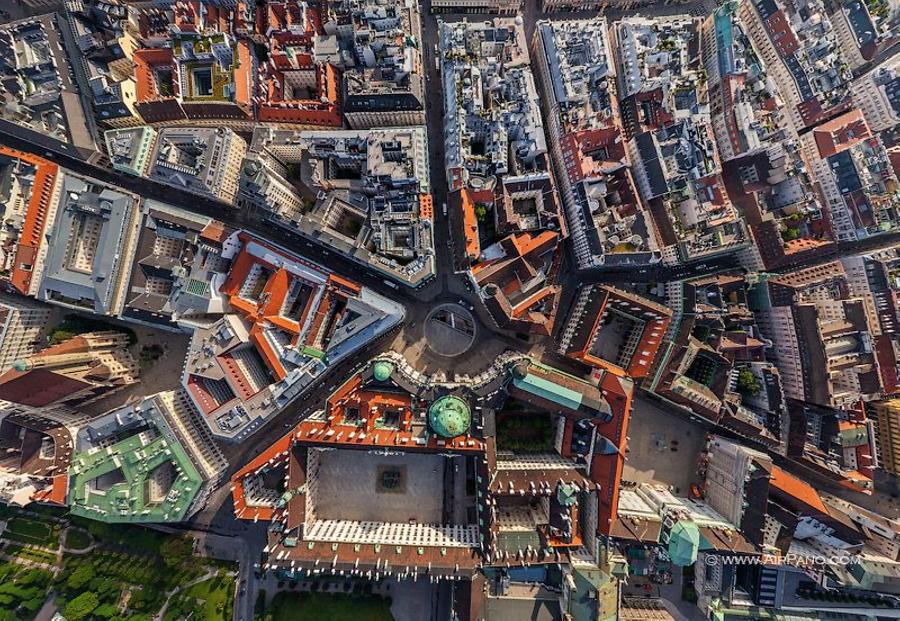 Vienna's image won't be complete without its musical history. Johann Strauss, a composer who transformed folk dance into elegant ball entertainment, was born in Vienna. Beethoven, Mozart, Bach, Haydn, and other famous composers, inspired by the city's unique atmosphere, also created their masterpieces in Vienna. Vienna kept its tradition of hosting outstanding balls. In fact, the Austrian capital is known even to this day as the "city of waltz".

We hope that our panoramas will allow you to get a feeling of the beauty, solemnity, virtuosity, and at the same time modernity of the city of Vienna.