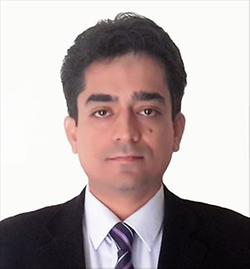 Bilal Zaka, Ph.D. is a veteran IT professional with over 17 years of experience in industry and academia. After his M.Sc. in electronics he started his professional career as network administrator to get hands on experience of hybrid LAN/WAN technologies.

Bilal kept close association with a number of academic institutes/Universities working in permanent and visiting faculty capacity. His diverse professional affiliations not only gave him an opportunity to observe and work with latest technology, but being part of education and research environments allowed him to investigate and experiment with ICT aspects which otherwise is not possible in pure industrial setups.

Bilal managed an offshore consultancy venture with Eletel Inc. USA. He headed a team of developers in Pakistan who worked on Callex VoIP product range for mobile devices. Besides the regular offshore software development activity Bilal provided consultancy services to a number of ISPs.

Bilal seeing a challenging career joined COMSATS Institute in 2001. He worked at different teaching and administrative positions in CIIT. Bilal is among pioneer members of the institute who established the communication infrastructure and MIS software for academic management.

Bilal rejoined CIIT Pakistan in 2009 after completion of his PhD degree in Informatics. In his capacity as General Manager IT at CIIT he architected the central information management system (CUOnline) running at 8 campuses of the institute. Bilal proposed and launched the operational model of CIIT Virtual Campus in 2011 and launched an IT enabled distance education program from CIIT platform.

He also recently (2017) completed a WorldBank funded project of IT Systems and security auditing at National Testing Center Tajikistan. Bilal received 12th TARADATA National IT Excellence Award on 18th of May 2014 for Excellence in IT Enabled Services.

Bilal Zaka got his Ph.D. 2009 at Graz University of Technology and has been working on aspects of Austria-Fourm ever since. He spent summer 2019 again in Graz with Austria-Forum and is very much engaged in working on a new version of Web-Books with new interfaces and functionalities, to be released Fall 2019. He will also offer a research seminar together with professor Maurer fall-term 2019/2020 on often ignored aspects of WWW.

Contributions to global-geography.org as member of its Consortium#

Bilal Zaka is essential in improving the technology of Austria-Forurm, particularly the Web-Books. He also contributes to information on Pakistan directly and indirectly, Indirectly by inviting H. Maurer for a keynote at the major yearly computer symposium in 2016 and by making it possible that the student Haris Naeem collected quite a few pictures and stories on Pakistan as follows: