The main disappointment for all travelers, who take a standard route to Antarctica, is that they can't see famous King penguins with a yellow "collar". Places accessible by cruise ships are populated with large colonies of Gentoo, Adelie, and Chinstrap penguins. They are cute in their own way, but are hardly 50-70 cm tall. And they don't have those famous yellow "collars" around their necks. On board of such a cruise ship I finally realized that King and Emperor penguins — biggest of them all — simply don't live on the most visited part of Antarctica, which is the closest to South America. They live on the outskirts: South Georgia Island and Ross Sea.

The shape of Antarctica is such that it reaches out to the South American continent. Drake Passage separates Antarctic Peninsula, the northernmost part of the coldest continent, and Cape Horn. This is where two largest oceans, the Pacific, the Atlantic, meet with the Southern "unofficial" ocean. Argentinean town of Ushuaia in Tierra del Fuego has regular cruise ships that can get you across the passage. This travel route has been there for a very long time. Ships operate every day November through March. I can't even begin to describe all the hardships one has to endure to cross the Drake Passage: two or three days of rocking and pitching even without a storm. But after that one enters calm waters of the Southern ocean with numerous Antarctic islands. Cruise ships schedule disembarking literally by hour. At the end of a five-to-six day cruise one gets to set foot on the continent of Antarctica, and then returning back to Ushuaia. 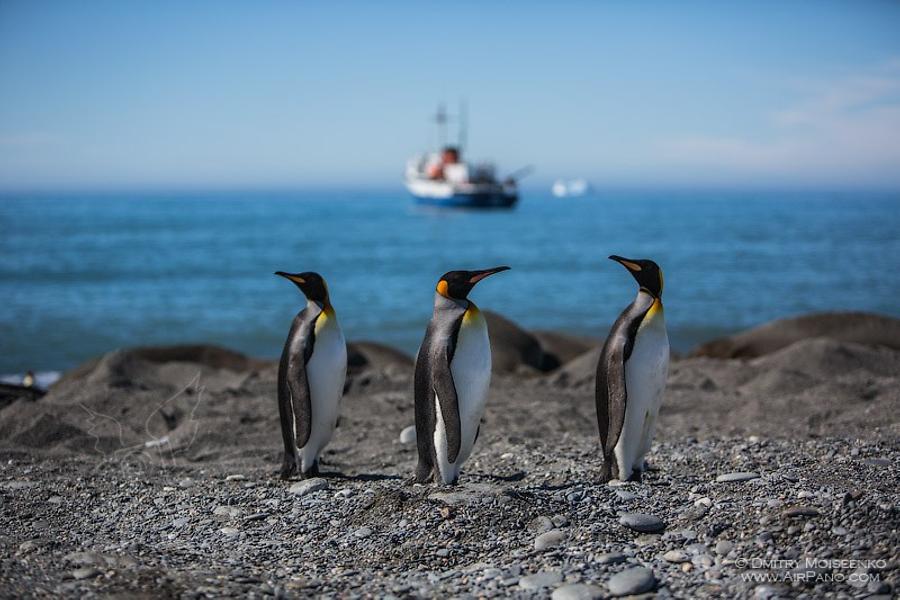 I've already been on this cruise in January 2010 (I'll share some photos with you later) and had Antarctica marked off my list. However, the photographer in me didn't want to settle until the most beautiful penguins with yellow "collars" were photographed. After that trip I've been thinking about that for several years, waiting for a second chance. And three years later I was given a new opportunity — an expedition to South Georgia, the place with the biggest colony of the second largest species of penguins on Earth! Cruises to South Georgia are rare and relatively expensive. Just imagine that first of all you have to get to Santiago-de-Chile, and then to Falkland Islands by plane that flies only once a week. From Port Stanley (capital of Falkland Islands) an icebreaker will take you on a 3-day trip: you will head East over the Atlantic and into sub-Antarctic waters, where South Georgia Island lies.

Now that we've covered the geography, let's talk history. There were large settlements of whalers in South Georgia and other Antarctic Islands from early 20th century to 1960s. Before the discovery of cheap petrochemical oil, whale blubber was used as a lubricant for heavy machinery. So the Industrial Revolution was made possible by whale fat. Eventually whale blubber factories were closed, people left, and their fleet of whaleboats was left to rust. Now only penguins roam the ruins and elephant seals bask in the sun. Fortunately, no one hunted King penguins, as they were rather useless. 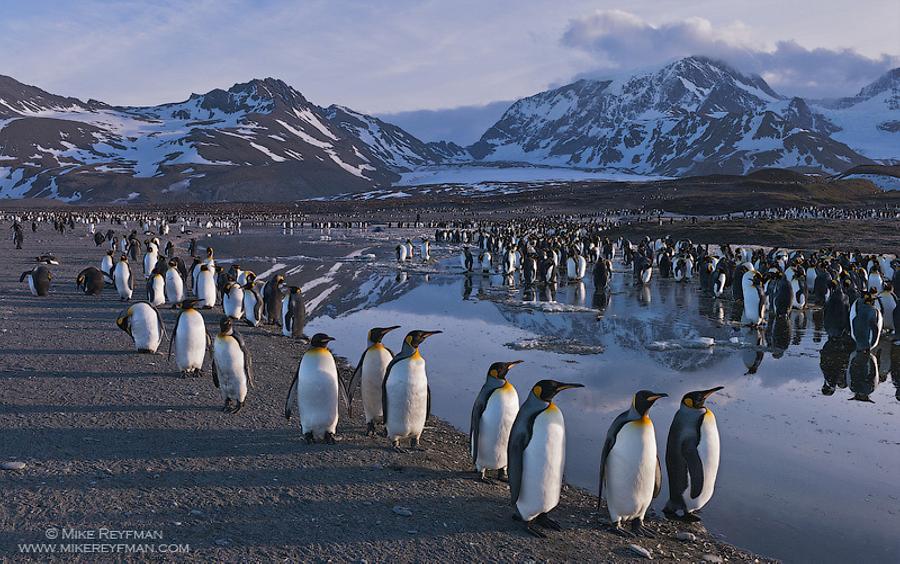 Taking albatross pictures and seasickness pills made me very sleepy, and a three-day trip to South Georgia just flew by. Finally we saw the island — rocks, waves beating against the shore, and gray sky — a rather unfriendly place. Strong winds are common there and a storm can start any moment. The island is stretched from southeast to northwest, and numerous bays and creeks carve its eastern side. The main inhabitants are penguins, elephant seals, sea bears, and a variety of birds. The ship slowly makes its way along side the island shore. At last we hear the announcement — disembarking will be tomorrow!

Salisbury Plain Bay welcomed us with cold weather, gray sky, wind, and a fantastic photographic light. I jumped out of Zodiac boat on the shore and walked for a little bit before a penguin passed me by without even noticing my presence. After that a group of 50 penguins jumped out of water. They looked rather preoccupied with their own business, which was definitely more important than a human photographer. Then I heard a roar of a sea elephant (a fat seal 4 meters long and weighing 1 tone) in the back. Three meters ahead a couple of thunderbirds (almost 1 meter wingspan) were ripping a penguin corpse apart. After my initial shock I took out my camera and started shooting... King beauties were all around me. 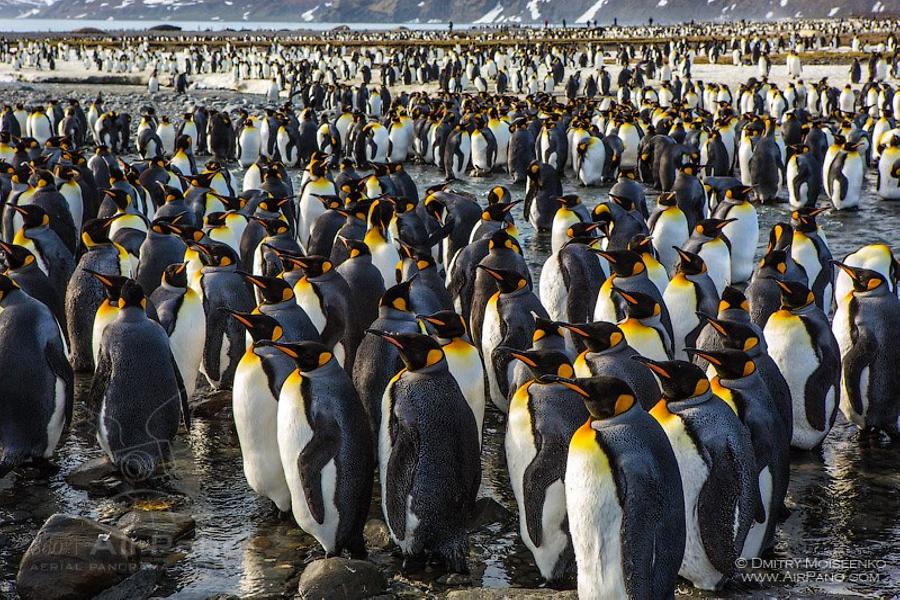 October is the month when nestlings start to grow. They were covered in brown down and were a bit shorter and fatter than adult penguins. Baby penguins gather in large "kindergarten" groups, where they wait for their parents to come and feed them. From time to time an adult penguin comes in front of the group and shouts something, then one of thousand babies comes out squeaking in response. After "lunch" they part till the next day.

Later I realized that penguins, baby penguins especially, are very curious creatures. If you stay in one place and don't do sharp movements, they start approaching you one by one, then in groups, and finally they surround you completely. The bravest ones try to taste your shoe or a camera lens. And that was a perfect time to shoot spherical panoramas.

There are hundred thousands penguins in St. Andrews Bay. It was a warm sunny morning when we arrived there. I had only my fleece jacket on. The snow was melting, and penguins stayed on several remaining snow patches or lined up alongside little rivers with their feet in the water to cool off. Mountains embraced the bay, and as far as I could see, there were penguins: in groups or lined up, jumping in the water and back. Waiting for food "kindergartens" occupied many archers of land. The seashore was covered with sea elephants bathing in the sun. The celebration of life was breathtaking. I just wanted to observe this organized chaos rather than take pictures. Later that night, after the sunset I noticed a curious detail: the evening back lighting made baby penguins' down glow beautifully, and it seemed like there was a large cactus field in front of me! 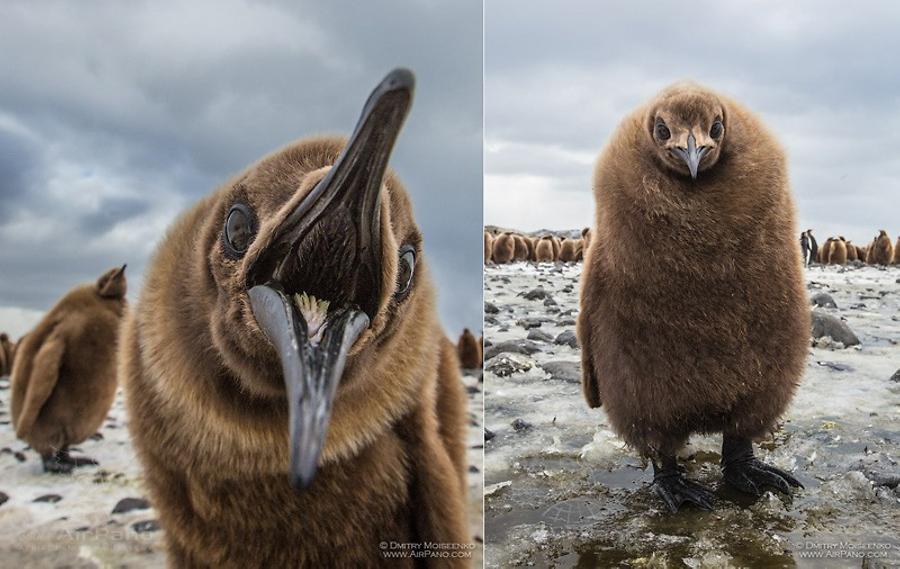 There were several more landings. I took spherical panoramas of sea elephants and small Adelie and Gentoo penguins, which I met on my previous trip to Antarctica. I also took pictures of whaleboat carcasses and ruins of whale blubber factories. But nothing could compare with overwhelming emotions I experienced at Salisbury plains and St. Andrews Bay. At the end of our trip the weather got angry at us for some reason: our ship had to hide from the storm wind in small bays for a couple of days, and we had to stay away from the shore as waves were too strong. It was time to return to Falkland Islands and then go back home.

We also would like to give you some useful facts about South Georgia island:

South Georgia archipelago (Isla Georgias del Sur)lies in the South Atlantic Ocean, between Argentina and Antarctica. It includes the largest island of the same name, and several tiny islands that are not worthy to mention.

Technically this archipelago is located closer to Latin America (and therefore Argentina constantly tries to claim sovereignty over it), but historically South Georgia is one of the British Overseas Territories.

Because of its remote location South Georgia archipelago was hidden from the rest of the world for a very long time. Even now there are debates as to who discovered the islands. Some say it's the famous Amerigo Vespucci or not so famous Anthony de la Roché. But there is a big difference between "discovering by passing by", and being the first to set foot on the unknown land! 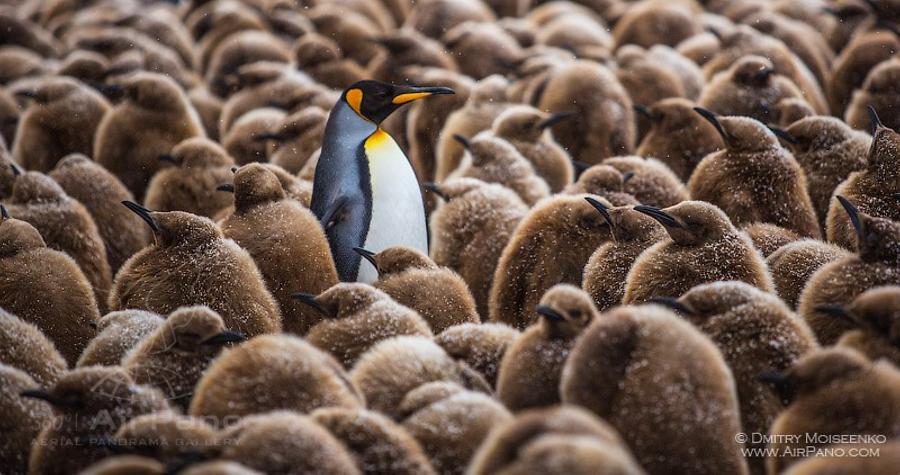 This fact is undeniable. The first to set foot on the distant and harsh islands was a famous British navigator James Cook. He not only explored, but also made a map of a new land naming it Georgia Islands after English King George III and proclaimed it the sovereign territory of United Kingdom.

In the last decades of the 18th century and during 19th century the archipelago was populated by seal hunters and by the 20th century it became the largest whaling center in the world.

During its short history archipelago saw a lot of exciting events. They were all connected with escalated conflict that Argentina had with United Kingdom over the sovereignty of the islands. Latin Americans put a lot of resources in the effort to seize the territory: they built military bases and launched submarines to the shore of the islands. In the 1980s islands were the center of the undeclared Falklands War, but United Kingdom, once again, prevailed and Argentina had to capitulate.

Rigorous English military presence remained on the island for two more decades before it was called off. Nowadays South Georgia is a heaven of tranquility on Earth with population mostly consisting of different scientists who observe weather.

Grytviken, the archipelago's largest city, is the southernmost and least populated capital in the world. During whaling boom years island population used to reach as nearly as 2000 people, but now, even during "busy" summer period population hardly reaches 50.

Tourists also come here. Grytviken and South Georgia both offer breathtaking scenery: mountains, glaciers, and fjords. Not to mention all the historical landmarks, such as: ancient cemetery with polar explorers remains and run down whaling bases.

The main attraction of the Antarctic is its unique fauna. And South Georgia is the place to observe it. For example, 80% of world's albatross population nests here. Albatrosses are not the only attraction here... It seems that the whole colony of a million existing King Penguins inhabits South Georgia! Hard to believe? See for yourself on our panoramas.