by Stas Sedov, Sergey Shandin, members of the AirPano Team that is a member of the global-geography Consortium.

In the year 1147, in order to expand the territory of Portugal, King Afonso I (also known as Afonso "the Conqueror" or "the Great") took control over the village and the castle named Sintra. Later the status of a capital moved to Lisbon, and Sintra, lying 23 kilometers to the north-west, became the royal resort and started developing rapidly. The village surrounded by woods and mountains was chosen to be the place for recreation, strolls and hunting and was frequently visited by the local aristocracy. One by one many luxurious summer residences were built here, as if every owner wanted to transcend each other. 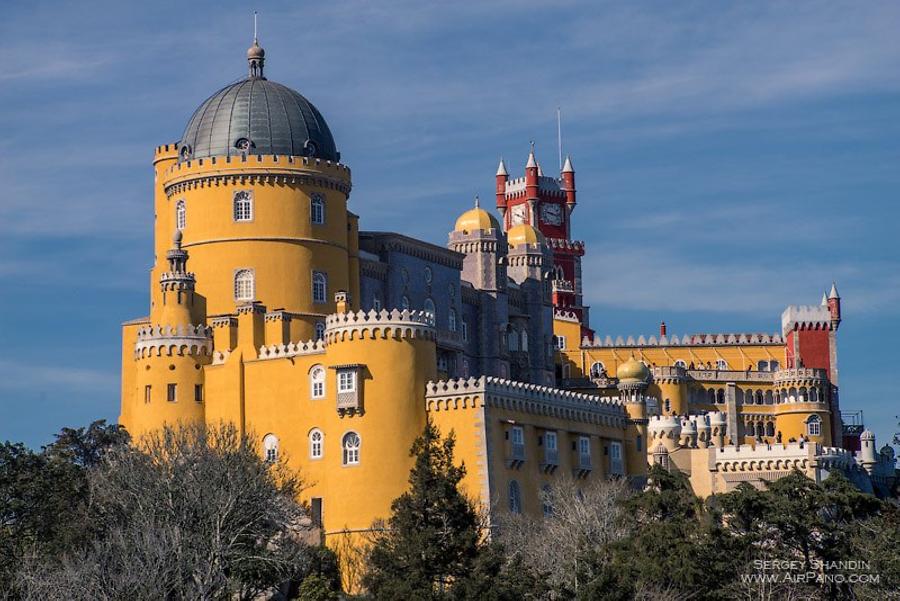 By now Sintra has preserved a great number of architectural treasures and has been declared a UNESCO World Heritage Site. The most remarkable objects are the National Palace, the Castle of the Moors, the Convent of the Capuchin and the estate of Quinta da Regaleira. Sintra is connected with the Atlantic coast by the Sintra tramway, which can also serve as a "living museum": some very old trams, produced more than a hundred years ago, still run the line. 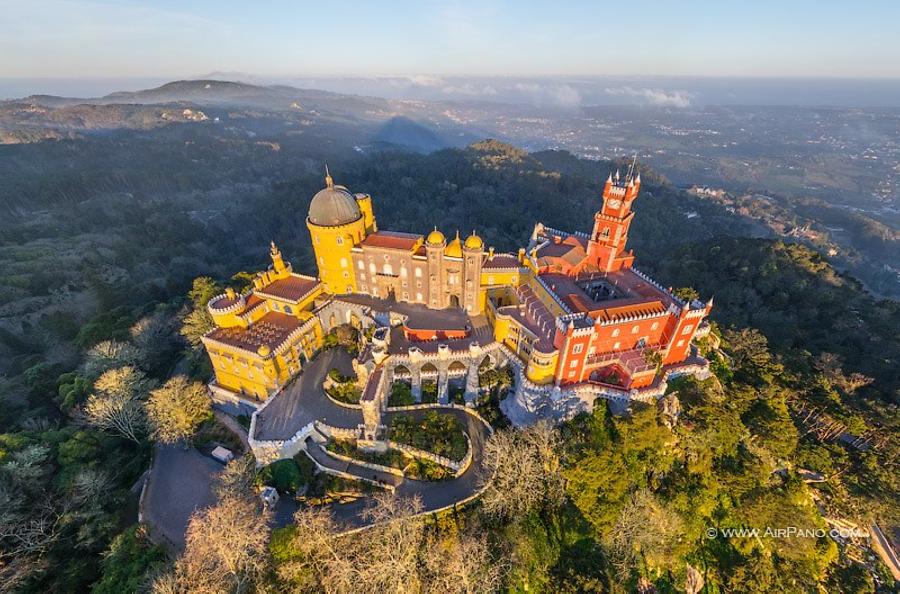 Every sight of Sintra has its own interesting history, but this time our tour is dedicated to only one unique monument — the Pena National Palace (Palácio Nacional da Pena). It owes its creation to Prince Ferdinand of Saxe-Coburg and Gotha, a husband of Queen Maria II of Portugal. The royal family had already had a residence in the center of Sintra, but the Prince decided to make a gorgeous present to his wife and in 1838 he initiated the building of the castle in the Romanesque Revival style on a high top of a hill above the town. Previously, this place was occupied by the ruins of the monastery, destructed by the great earthquake of 1755. However, the chapel made of marble and the foundation of the monastery managed to avoid significant damage, so the architects used it as the basis for the castle. 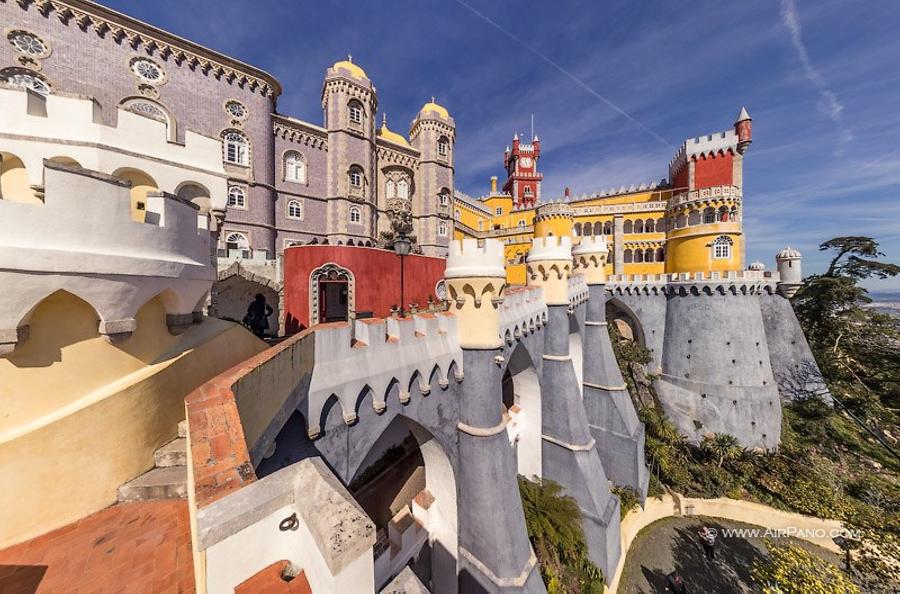 But neither the Queen, nor the Prince could properly use this estate: Maria II passed away in 1853, yet Prince Ferdinand still took trouble over the building of this "present", he didn't live to see it finished too. In 1889 the palace became the property of the Portuguese State. The last dweller of the palace was Queen Amélie of Orléans: in 1910 the Republican Revolution took place in Portugal and the Queen left the country in exile, while the palace was classified a national monument and transformed into a museum. 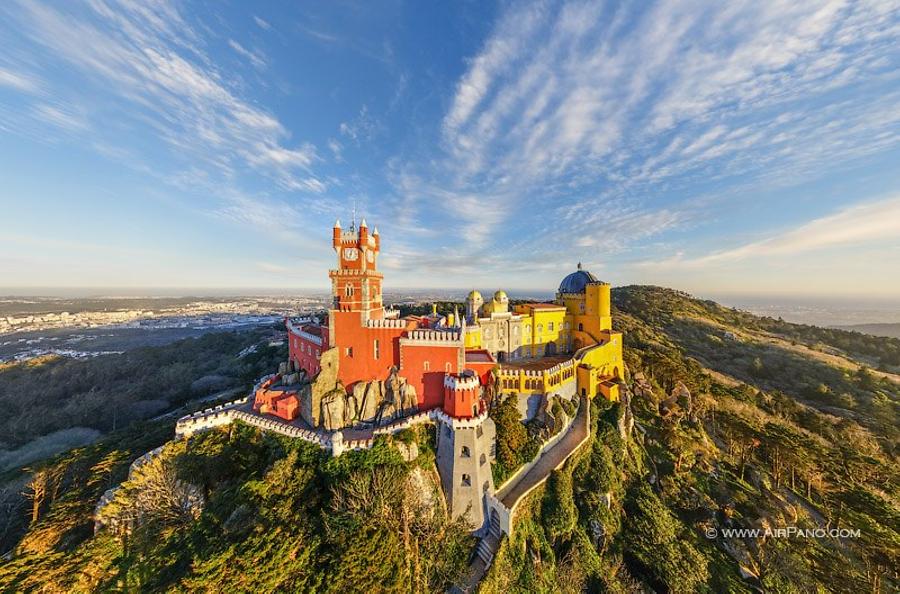 Over the time the colors of the red and yellow façades faded to entirely gray, but by the end of the 20th century the palace was repainted and the original colors were restored. The interiors have been preserved as it was left by Queen Amélie, but still, the major interest is drawn to the exterior appearance and the surrounding park. 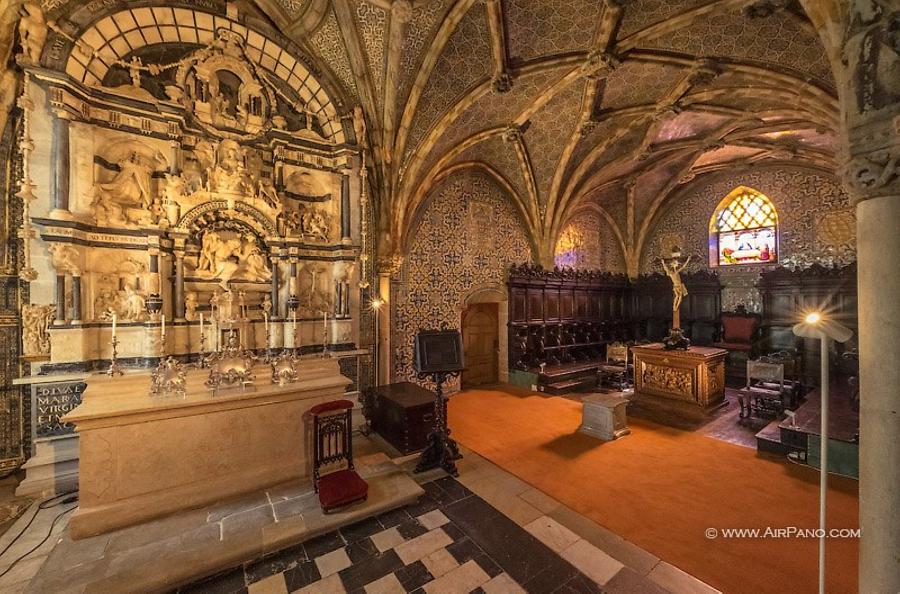 Interior of the Chapel of Pena National Palace

The creation of the Pena Palace and Park took several decades, and it has gathered several quite different styles: Neo Gothic, Neo Manueline, Neo Muslim and Neo Renaissance. The architects were inspired by the most famous and outstanding masterpieces, so references to the Belem Tower, Bavarian castles and many other great examples of the world's architecture can be noticed here.

Upon entrance in the inner yard, the visitors are welcomed by the newt: half a man, half a fish, its hair gradually turns into vine branches. The depiction symbolizes the allegory of creation of the world out of four elements: fire, water, sky and ground. 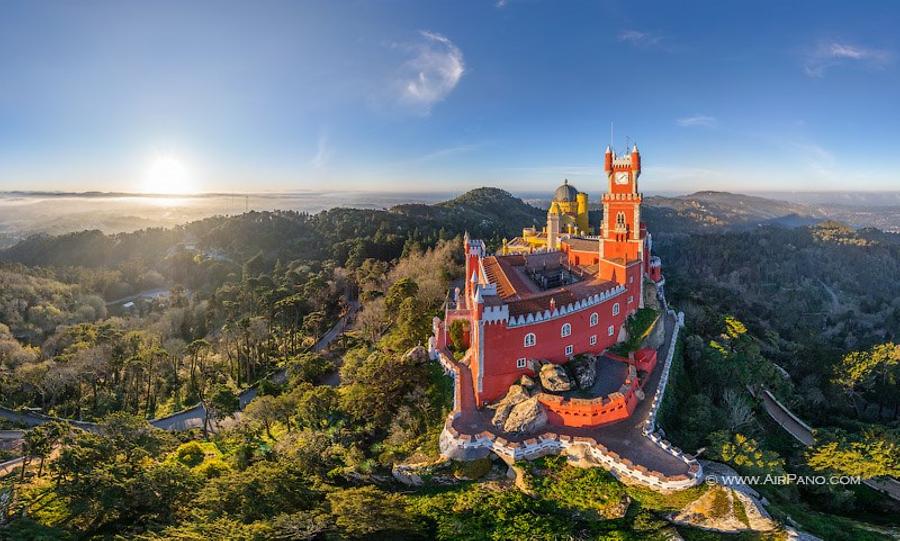 The Pena Park, having the total area of 270 hectares, possesses the plants from all over the world: North American Magnolia, Japanese Camellia, Australian Fern, different Cypresses and Cedars. The system of paths and lanes of the park form a labyrinth, and the terraces offer picturesque views of Sintra and surroundings. On a clear day even Lisbon is easily seen from here, and the flight done with the help of our panoramas will allow you to enjoy this romantic place right now.