by Stanislav Sedov and Dmitriy Moiseenko, members of the AirPano Team that is a member of the global-geography Consortium.

Rome is one of the most famous and beautiful cities in the world. You've all heard the legend that it was founded by two brothers, Romulus and Remus, sons of the god Mars raised by a she-wolf. And then the first brother killed the other and founded a new settlement in the same place. It was a time of iron age and cruel hearts!

The origin of the legend is unknown. In fact, Rome, like many other cities, was founded by the Etruscans in the 8-9th century BC. Palatine and Capitoline hills had a very strategic location; moreover, there was a river Tiber which supplied people with water.

According to historical documents, the downfall of the Etruscan dynasty was brought upon by the king Tarquin's son lack of self-restraint. He dishonored a certain Lucretia, a lady of high society, which led to her suicide. Lucretia's relatives and friends didn't stop at getting vengeance only on the offender, but raised a large-scale riot against the Etruscan rule.

So in the 509 BC the famous Roman Republic started, and its size and wealth grew with each passing day. The subsequent history of Rome, even as a brief retelling will take a few pages in the smallest font. The Punic Wars and Pyrrhic victory, Hannibal and Carthage, Gaius Julius Caesar and Spartacus, Nero and Caligula, Mark Antony and Cleopatra, the Flavian dynasty and Constantine the Great. In fact, during that time the life of whole Europe revolved around the Roman Empire.

"All roads lead to Rome", "Rome is the Eternal City" — no one would understand you, had you decided to argue with these statements during those ancient times. It was only in the 5th century, when Rome was captured by the Visigoths and ransacked by vandals, that the Republic lost its influence on the rest of the world. As a result of the ensuing bloody wars, Rome became weaker and weaker, and by the mid-century the only country it controlled was Italy.

However, the fall of the empire didn't affect the city's renown: its glory wasn't tarnished, but became of a different character. Nowadays countless sights of Rome built during legendary times attract many tourists.

Let's just say that we have to thank the bloodthirsty emperor Nero for building the Cathedral of St. Peter in Vatican, the same place where he executed Apostle Peter. The Pantheon in Rome, built at the turn of the old and the new era, is now a national mausoleum. It was built as the "temple to all gods" and has been used as a tomb: among those who are buried there are the great painter Raphael, King Victor Emmanuel II, Umberto I, and other famous people.

The Capitoline Hill, as the site of the city's foundation, was an "apple of discord" between the brothers Romulus and Remus. Since the Punic Wars, the Roman Forum has been the center of political, religious, and economic life of Rome. The Colosseum, a famous sight that ends up on every photo of Rome, was opened by the Flavia family. 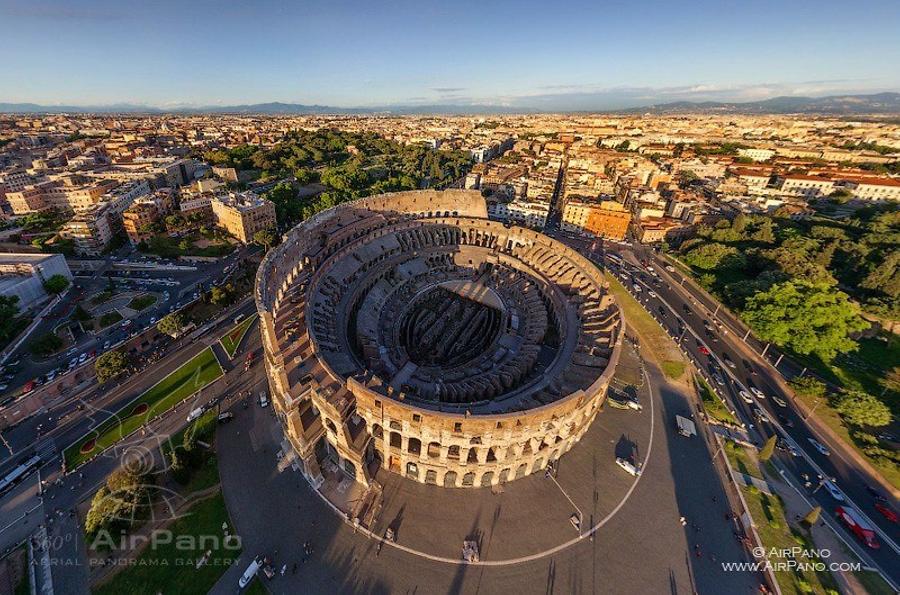 Piazza Venezia, situated between the Capitol and the Forum, has been a major transport point since Roman times. Piazza Navona is another city square that was built thanks to Gaius Julius Caesar. For a long time it has been used as a stadium of sorts (hence the name of the Greek origin). The beauty of the surrounding buildings makes it the perfect example of Baroque architecture.

Castel Sant'Angelo that served as a tomb, the Pope's residence, and a prison has turned out to be one of the most interesting museums in Rome. It's connected by Sant'Angelo Bridge that looks very solemn and is lined with marble slabs. There was a time when heads of executed criminals were hung along the bridge as a terrible warning to others.

Fabricio is another bridge that connects the Tiber Island to the left bank of the Tiber River; it dates back to the year 62 BC (by the way, its length is 62 meters, which is hardly a coincidence). Plaza de España is famous for its stairs, the steps of which are made of travertine and designed by architect Francesco de Sanctis in the middle of the 18th century.

The Trevi Fountain, the largest fountain in the city, is also among the most famous landmarks of Rome. It was built in the year 1732-1762 and designed by architect Nicola Salvi in ??Baroque style; it's adjacent to the facade of the Palazzo Poli, making it a single architectural ensemble. 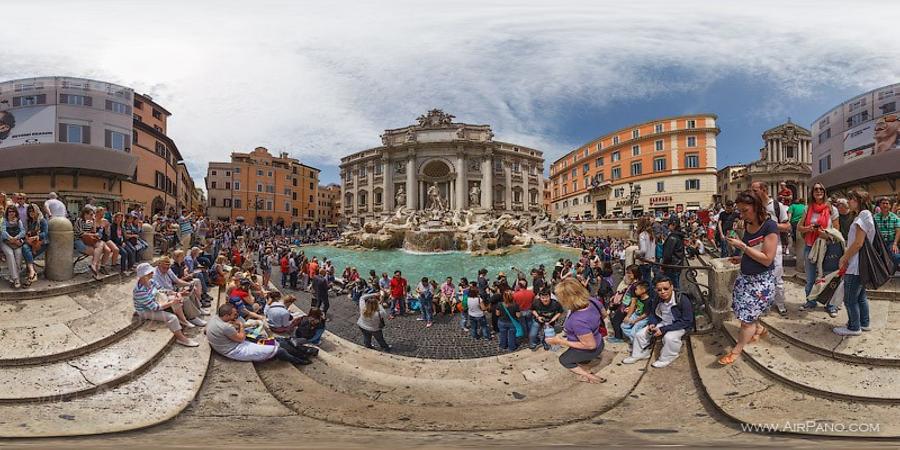 In the central niche of the palace there is a Neptune sitting on a sea shell and pulled by sea horses and newts. Allegorical figures are placed in the niches on both sides of Neptune and there are bas-reliefs above them. One of them depicts a girl that points the Roman soldiers to the source. In the 19 BC an aqueduct has been built that pumped water from the source to Rome.

There is hardly a person who have been to Rome and didn't drop a coin into the Trevi Fountain. There is a belief that one coin will ensure your return to the Italian capital, two coins will lead you to your loved one, three coins will lead to a wedding, but if you want to get rich you need to throw four coins. As a result, the Trevi Fountain is filled with about three thousand euros a day, and a million euros a year!

Anyway, Rome is a city of fountains, museums, and squares where you can see historical monuments and buildings on every step of your way. We hope that "flying" over Rome with our panoramas will give you the opportunity to enjoy the beauty and magnitude of the Eternal City. 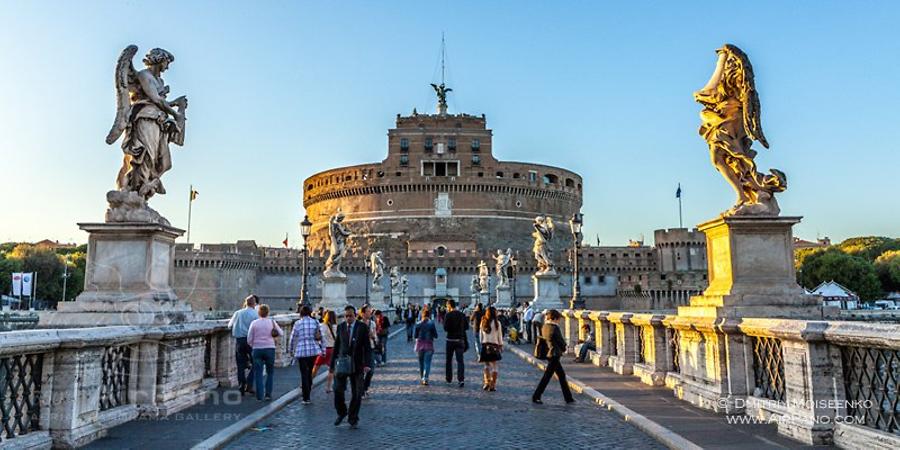 And now let me turn the floor over to Stanislav Sedov, who will share some of his impressions about the trip.

Our first photo shoot day in Rome started with an incident which could have potentially ruined all our plans. I would like to express my gratitude to the Italian police for their help in resolving this matter. But let's start from the very beginning. 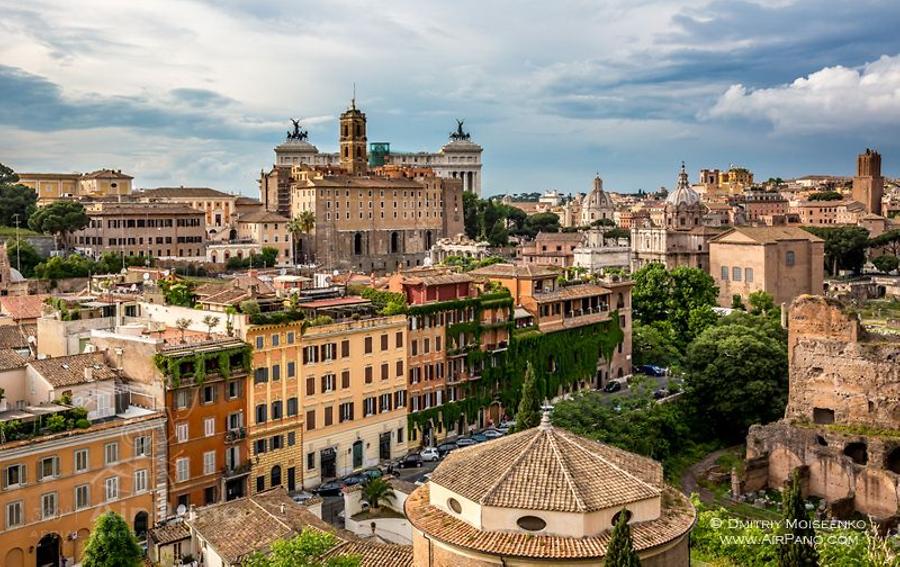 It so happened that I came to Italy with my family two weeks before the planned photo shoot. I wanted to spend a couple of weeks wandering through the streets of Rome, visiting museums and various places of interest, because during the photo shoot Dima Moiseenko and I don't have time for these activities.

Two weeks flew by very quickly, and I found myself on the way to the airport on Leonardo Express to see my family off home. Dima arrived in Rome practically at the same time, because the next day we had to take pictures of the Colosseum. But in all the confusion of my family's departure and meeting my colleagues I left my backpack with all the documents, credit cards, and camera in the train car: I put it on the top shelf and forgot it there when leaving the train. I realized that only when the train already left the station. 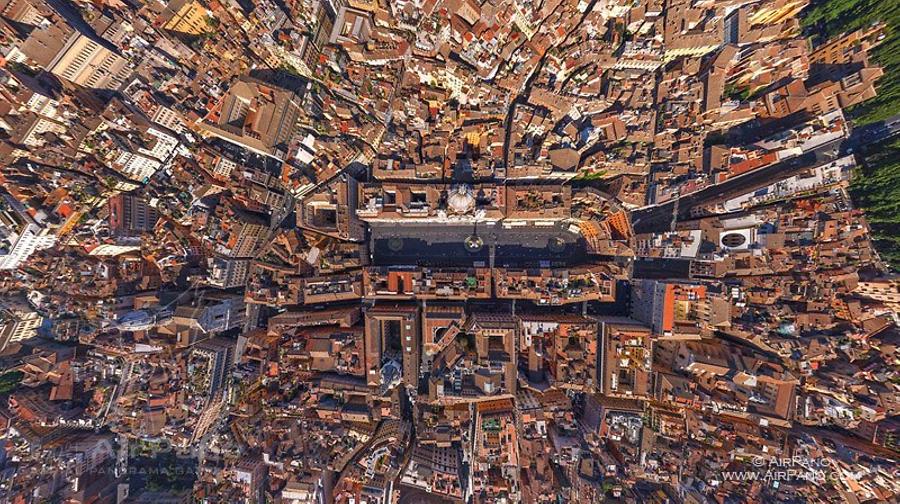 Piazza Navona from the altitude of 160 meters

Dima and I went to the airport police station. After listening to my story, the duty officer became very skeptical about our chances to find the lost backpack: there was a commune of homeless people in Rome's central station that searched arriving trains for things left behind.

However, when I told the officer which train I took to get there, he contacted the train driver and asked him to search train cars for my missing backpack. It was around the time when the train was about to depart from the center of Rome back to the airport. Ten minutes later, which seemed like eternity, the officer's phone rang. After a brief conversation he smiled at me, "Looks like it's your lucky day, he found your backpack."

Lucky doesn't cover even half of it! Passport, driving license, credit cards, and a camera worth more than $3,000 were all in place. Dima and I thanked the airport police for their help and went to the city center towards our Roman adventure. But that's another story.

Unfortunately, I do not remember the name of the officer, but once again I would like to express my gratitude for his help! There is a part of his work in our virtual tour of Rome.