Before we start our virtual tour above the famous Falling Tower of Pisa I would like to express my gratitude to Francesco Maria De Lorenzo, the Italian photographer, for his tireless and altruistic help.

It is due to Francesco's support and the farseeing policy of Pisa City Administration, that we were able to photograph the Falling Tower from a bird's eye view.

Hundred thousands of people from around the world visit our website daily. I am certain that the Falling Tower and the small, but extremely beautiful city of Pisa will proudly represent Italy among other most interesting places of the world, photographed from a bird's eye view.

Traditionally all popular tourist destinations are called "monuments". Italian Pisa is not exactly a "monument", but more of a "mystery" due to many reasons, starting with a fact that nobody exactly knows who built it. The most popular theory says that it was built by Etruscan civilization. However, there are scientists, who believe that ancient Greeks or Ligures built Pisa. Unknown origin of the city makes it even harder to figure out the meaning of its name. So it's Pisa, just Pisa — an untranslatable set of characters.

First of all, Pisa is famous for Torre Pendente di Pisa, The Leaning Tower of Pisa. It's so famous that it outshines all other Pisa tourist attractions and monuments combined. Locals call it the "long-drawn miracle". Ironically enough, the tower is located at Piazza dei Miracoli (the Square of Miracles). 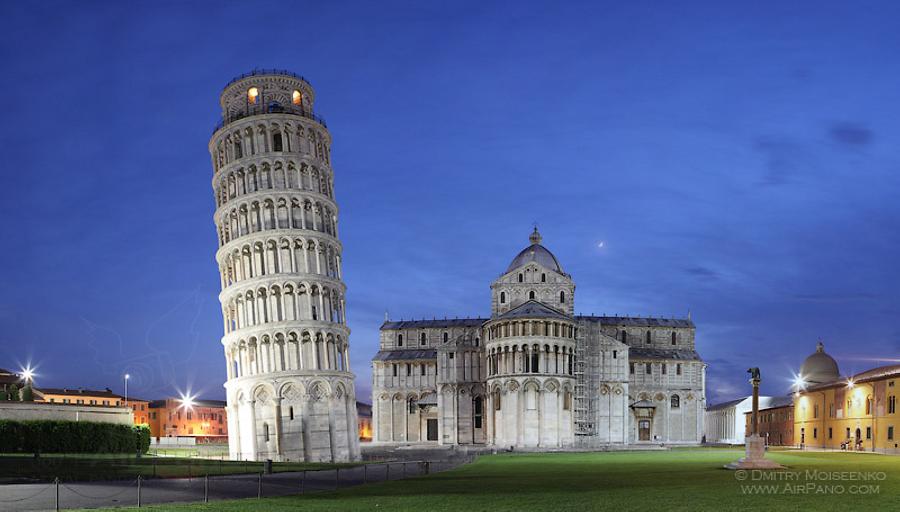 But, of course, the name is just a coincidence; because the whole Square of Miracles is so miraculously beautiful that it was declared a UNESCO World Heritage Site. As for the Leaning Tower, it is not exactly a miracle, but a simple architect's mistake.

However, this is where a new layer of mysteries opens! Construction of the Leaning Tower (also known as the bell tower of Duomo di Pisa (Santa Maria Assunta)) took almost two centuries... But who initiated it? There is no exact answer. We only know that the construction started August 9th, 1173.

According to one of the theories, the project belongs to some architect by the name of Bonanno Pisano, who discovered his mistake only after they finished the ground floor (11 meters high) — by that time vertical deflection was about 4 centimeters. The architect aborted the construction (or has been kicked out, according to other version), fled the city, and spent the rest of his life in poverty and obscurity.

However, historians offer few more names, including Gerardo di Gerardo and Diotisalvi. Although each one could easily be the project's author, there are certain architectural arguments against their authorship. History preserved only names of architects, who continued the erection of the bell tower: Giovanni di Simone, Tommaso di Andrea Pisano and many others. Almost two hundred years of construction provided a lot of work for each of the architects, but none of them was able to straighten the tower at its foundation level. Only its upper part, built in the second half of the 14th century, looks more or less straight.

It is still a mystery to modern architects, why the tower is leaning. Some theories say that it is due to a misplaced water pump, difference in soil density, or a very banal "insufficient funding" reason. Nevertheless, as soon as the tower was finished, Pisa city authorities had a new challenge — how to stabilize it.

Ugly-looking supporting structures were out of the question, as well as some other not so aesthetic solutions, including really funny one: a giant ferroconcrete statue of architect Bonanno supporting his creation with his head, arms and a knee. Other experts suggested praying God, so he would keep the tower from falling; or "making a giant san "cushion" around the tower, so it doesn't shatter if it actually collapses". Finally, many years of stabilization work resulted in replacing crumbling pillars, reinforcing the subsoil, installing counterbalances and other advanced technology solutions. After the corrective reconstruction was finished in 2010, the angle of the Leaning Tower of Pisa decreased from 5°30' to 3°54' degrees.

At Piazza dei Miracoli in Pisa

Another interesting fact: the name of Galileo Galilei is associated with the Leaning Tower of Pisa. This famous resident of Pisa carried out his scientific experiments, such as dropping objects of different weight from the top of the tower, and — as a result — bringing down the wrath of locals upon himself. However, we have no proof of that. The only true fact is that the great scientist was indeed born, raised and studied in the city of Pisa.

Actually, it would be wrong to suggest that the famous Leaning Tower is the only thing that Pisa has to offer. It has a very rich and fascinating history. For example, there was a time, when the whole city was excommunicated for several years. The Cathedral in the Square of Miracles was built on money that Pisano fleet stole from Arab pirates. Bold and freedom-loving Pisa preserved its fascinating and centuries-old architecture for us to see: from elegant boardwalks to grand royal palace...

Welcome to the virtual tour over the most mysterious city of Italy...

10 Panoramas of Leaning Tower of Pisa