A Catholic prince honored in a Protestant church# 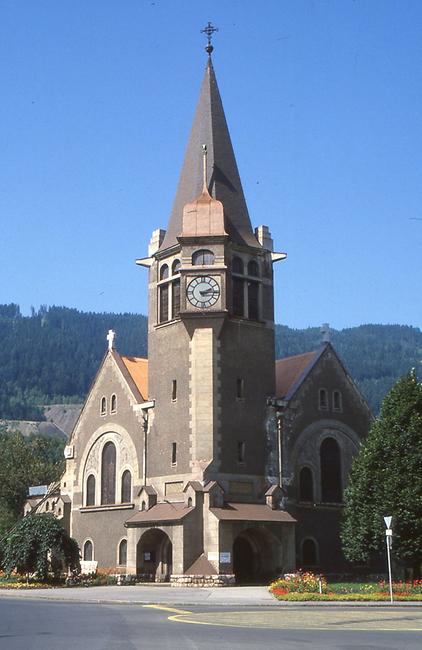 The church. Photo: G. Jontes, under CC BY 4.0
Church buildings, which were built near the turn of the 19th to the 20th century, are usually called "Art Nouveau churches". This is also true in Leoben Leoben, Steiermark . From the ground-breaking ceremony in 1908 to the inauguration, it had only taken one year to build the Gustav Adolf Church. The Viennese Clemens M. Kattner had won in an architectural competition. That Art Nouveau is an exaggeration as becomes clear with a look at this in many ways noteworthy church. It stands solitary with the co-built vicarage on the right bank of the Mur river, but fits well into the urban planning concept, which in the 19th century led to the generous northern Leoben suburb, the Josefee. This achievement was never again paralleled in the 20th century.

The Gustav Adolf Church stands with its tower edge exactly in a line leading to the main square and thus opens up the old town. Its planned structure is one of the most remarkable medieval ones in Styria, one of the foundations of the then prince King Ottokar II of Bohemia in the mid-13th century. It can be said that the Protestant church practically put an end to this spatial thinking.

If one speaks of Art Nouveau, then one should correctly call it only the art style of the late 19th century, which broke with the routines of Historismus and sought its role models in the Munich journal "Die Jugend" ("The youth").

Austria had another development at the same time. It was the revolutionary Viennese "Secession" that broke away from the conservative "Künstlerhaus" and entered new territory with people like Gustav Klimt, Egon Schiele, Oskar Kokoschka, Kolo Moser or Otto Wagner. So it is better to speak of a Secession style.

However, the Protestant church in Leoben can not be assigned to either direction. Inside and outside, it is definitely of high artistic quality, corresponding to the liturgical conditions and is because of its rich decorations far superior to many other churches. The stained-glass windows, which date back more than half a century, immerse the interior of the building during the day in a fascinating soft-colored light. And at night, the windows shine from the outside in bright colors.

The windows of this series were created by Atelier Geyling in Vienna, who in the 19th and 20th centuries also participated in the restoration of the gothic windows in the Maria am Waasen church in Leoben.

Special attention should be paid to the figurative panes of the ground floor, which are oriented to the northwest, southeast, south and southeast and in pairs correspond to the main characters of Protestantism. Their content focuses on reformers, poets and musicians and, quite unique, on a Catholic prince. Their artistic and content quality deserves to be explained in more detail:

The portrait represents the reformer in the professor's beret and is surrounded by a wreath made of so-called Luther roses. This is a special symbol, because Luther also wore a coat of arms, which adorns a white heraldic rose and whose center forms a red cross. The inscription "The largest miner's son the German-academic connection Cruxia to Leoben" refers to the still existing academic fraternity Cruxia, whose members are recruited from students and graduates of the Leoben Montanuniversität. Such additions express the fact that the named persons or persons donated the respective disc.

On the bottom left is the coat of arms of this traditional academic corporation, whose helmets wear the colors red-white-gold as the national colors of the burqa band of the Cruxia. The coat of arms shows in the heart symbol the "circle" of the corporation, a graphic short form of the name and a motto, also a red cross, which indicates the name Cruxia. This has no religious references, but refers to the founding of the corporation, the Leobener Gasthaus "Zum Kreuz". From the milieu of the Universität which was founded as a mining academy and later called Montanistische Hochschule, it is also understandable that there is an allusion to the origin of Martin Luther: he was born in the mining village Eisleben in the Erzgebirge. 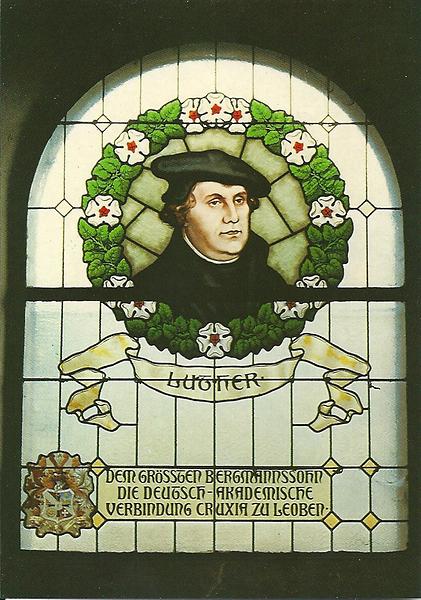 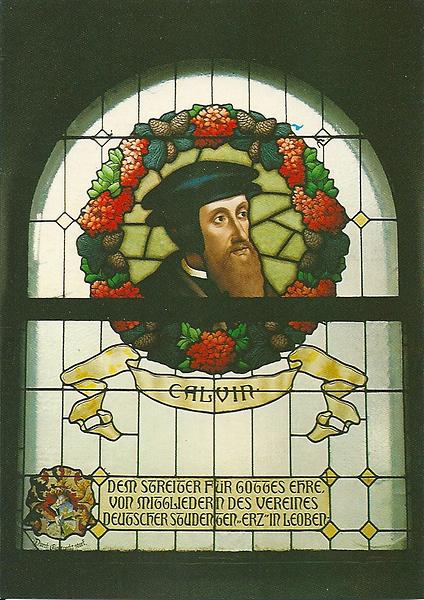 The Gustav Adolf Church is today a parish church for both the Lutheran and Reformed Christians Leoben. The portrait head of the austere Swiss reformer is surrounded by a wreath made of the blossoms of the local alpine pasture and cones of pine trees. There are also botanical references on all the windows in the series, which are intended to illustrate connections between the countries of origin of the Reformation and the diaspora community of Leoben. Calvin, too, wears a scholar's beret, as was customary in the Renaissance and Humanism period. The donor's dedication reads: To the champion for the glory of God, to members of the Association of German Students 'Erz' in Leoben. This corporation is the later academic Corps Erz still existing today. The attached coat of arms shows in the heart also the founding date with 16. 10. 1881 of the corporation. The motto enclosed is Together strong, with courage to the goal .

The choice of the Swiss Calvin as the content of the second window of the Reformation is surprising, since the Gustav Adolf Church is Lutheran, i.e. follows the Augsburg Confession (A.B.), while Calvin is known to have founded the Reformed Church of the Helvetic Confession (H.B.).Followers of this confession were rather rare in the Leoben. It can be assumed that this "ecumenical" appropriation within the Protestant denominations came from the first pastor of the Leoben parish Paul Spanuth, whose ideas certainly provided the programmatic framework for the windows.

The Swedish king (since 1611),involved with his armies in the most tragic European conflict before the two world wars, formed the military spearhead against the imperialists- the main power of Catholics- and saved the Reformation in the Roman-German Empire. He was the hope of all Protestants, but died in the Battle of Lützen against Wallenstein. That is why he is considered a martyr. Protestant associations and societies, but also churches, take Gustav Adolf's name in Styria in addition to the one in Leoben and the Protestant churches in Voitsberg and Weiz. His portrait is surrounded by a wreath of passion flowers. Their color violet is itself a sign of suffering and grief. Originally from South America, this flower was christened Passion Flower by Christian missionaries, who first saw the clearly visible Passion Relics (Arma Christi) crown of thorns, cross nails and gavel in its bizarrely shaped blossom. The wreath around the king's portrait also contains laurel branches, which have been considered a symbol of military victory since antiquity. As founder of the window, two private Leoben Protestant personalities reveal themselves in the dedication inscription.

A monumental sculpture of Gustav Adolf stands in the western annex of the Leoben church. It was created in the 20th century by the well-known Styrian sculptor Wilhelm Gösser (1881-1966), who was born in Leoben. 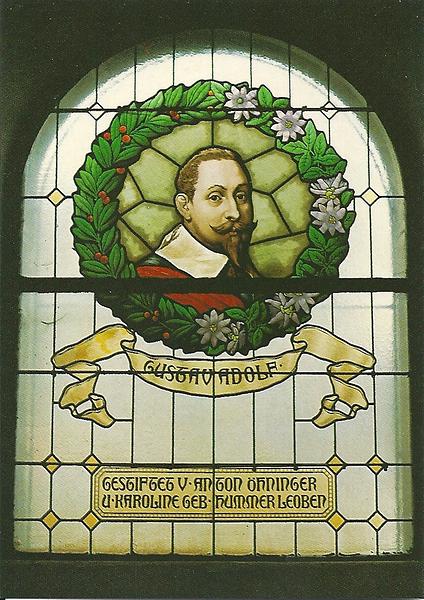 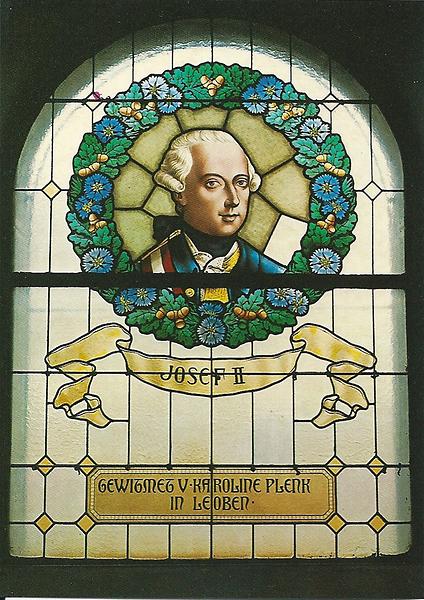 A Catholic prince in a Protestant church? But, after all, since 1781 the Protestants of the Habsburg family have been indebted to Emperor Joseph II for the tolerance of their confession after two centuries of oppression. Even the Emperor's mother, the "Empress" Maria Theresia, had shown no mercy with the Protestants of her countries, and many of them had been forced to leave Styria when they were discovered.

The wreath around the ruler's portrait has again botanical-political references. Its composition is to be understood from the time of the edification of the church. It consists of acorns, i.e. the fruit of the "German" oak, and of beautiful blue cornflowers. At the end of the 19th century, this flower was chosen as a symbol of those Austrians who believed in a Greater Germany, as the German Emperor Wilhelm I had occasionally called this plant his favorite flower during Bismarck's time.

The southwest shows a portrait of the composer Johann Sebastian Bach (1685-1750).#

As the Leipzig Thomaskantor Bach was in church service most of his life. He has composed the most famous and moving sacred masterpieces that are often performed in worship. Hundreds of cantatas, the passion music of St. Matthew and St. John, the spiritual motets and the High Mass stand for the instrumental-vocal works. The cosmos of organ works and chorale preludes is still today the basic stock of evangelical musical figuration of worship. But it is this painting that is the weakest in comparison with the other portraits. There are enough authentic images of master Bach, but only the caption makes us recognize the musician shown here in profile as the divine composer. Edelweiss and gentian are woven into a wreath, flowers the master may never have seen in his life. 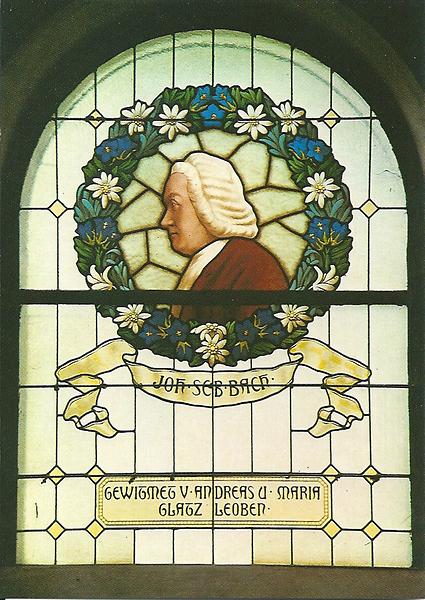 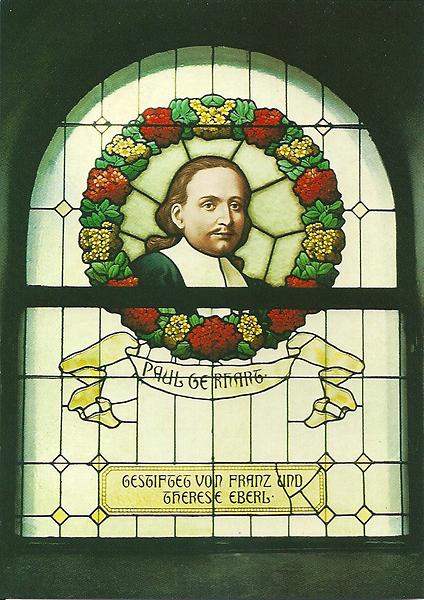 The West is dedicated to the literary giants of German Protestantismus. #

With the Berlin preacher Paul Gerhardt the great poet of the most famous choral texts is presented in the picture: Command your ways - Merry my heart shall jump - I stand at your crib here - Now you all thank God - Now all the forests rest - O head of blood and wounds - How shall I receive you? The flower ornament of the decorative wreath can no longer develop any symbolism here. It consists of the native alpine blood-red Almrausch (alpine Rhododendron) and the golden-yellow Petergstamm, also called Aurikel.

The stylistic difference between the other glass windows is shown in the example of the most beautiful of all windows above the pulpit altar. The depiction shows the Savior, depicted in shining light with outstretched arms as a half-figure, surrounded by a wreath of native conifer branches and pine cones. Christ's gesture is explained by the words, "Come unto me all who are laborious and burdened" (Matthew 11:28). All others pictures from the time of the edification and those of 1959/60 close the colored circle of the gallery windows, but their content does not match the portrait disc and the window of Christ. 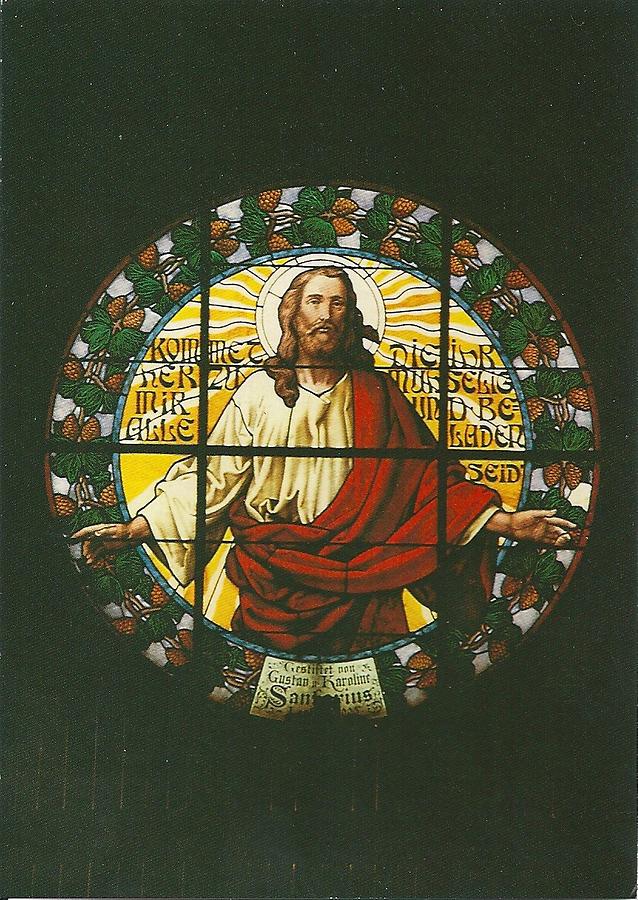