Palau is full of surprises #

This small island nation (some 20.000 people on a few hundred square kilometers) is full of a number of unusual aspects.

First, it follows a strictly matrilineal system. To put it more specific, in Palau children take the name of the mother as familyname, not of the father; only women own property; etc. Such matrilineal practices are seen in nearly every aspect of Palauan traditions, especially in funeral, marriage, inheritance and the passing of traditional titles. This is of particular interest to solciologists who sometimes claim that women are less war-like. And, inded, since 1200, Palau has not been involved actively in any war.

However, it was overrun in WWII by the Japanese who interned all Palauans on the main island (with the largest city Koror of about 12.000 souls). Japanese treated the people of Palau well, however. But US general Douglas MacArthur, whose task was to push the Japanese back and defeat them had to re-conquer Palau. In his diary he writes that this would take him three days. Well, it took three months, and the fight was one of the most ugly ones in the Pacific. Hundreds of shipwrecks and downed planes in the sea between the many islands, and skeletons of Japanes in some caves are one of the "attractions" for divers, the majority of tourists on Palau. However, it is not just the wrecks divers love: there is probably no place with more fish, larger groups of reef sharks, underwater caves... all this in crystal clear conditions.

But Palau has still more to offer. While nowadays the US dollar is the main currency used, for hundreds of years stone currencies were used on some Pacicifc islands: Rai, or stone money, are large, circular stone disks carved out of limestone formed from aragonite and calcite crystals. Rai stones were quarried on several of the Micronesian islands, mainly Palau, but briefly on Guam as well, and transported for use as money mainly to the island of Yap. They have been used in trade as a form of currency. While the monetary system appears to use these giant stones as tokens, in fact it relies on the history of ownership. Being too large to move, buying an item with these stones requires just to documetn that it no longer belongs to you in exchange for whatever. As long as the transaction is recorded in the (oral) history, it will now be owned by the person you passed it on to: no physical movement of the stone is required.

From a nature point of view the most interesting phenomenon are golden stingless jellyfish. See the 360° panoramas of Jelly Fish Lake. 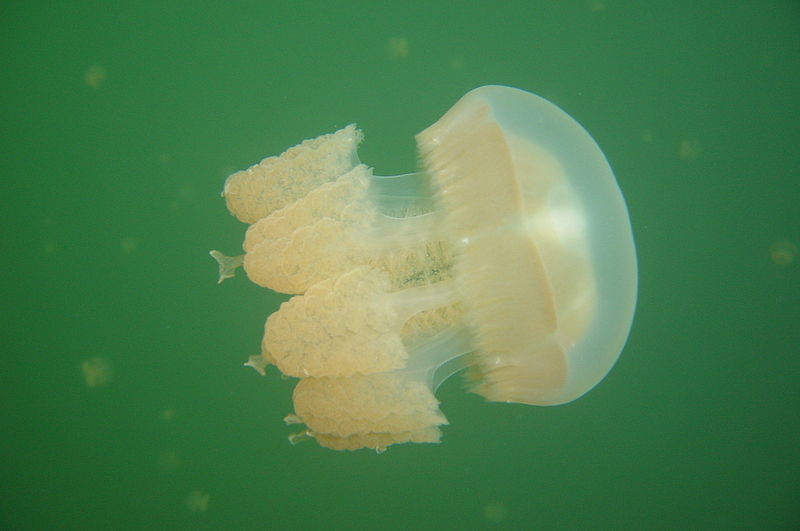 Under CC license from Wikicommons

Golden jellyfish from Jelly Fish Lake. A not nettling genus of yellifish.

They are often quoted as the only animal that does not eat other living beings (even vegetarian animals like say cows eat grass, a living substance). The jellyfish of the genus "catostylus" seems to only live (like a plant) on minerals and sunshine in some of the brackish lakes on Palau. Mind you, this is not strictly true: it lives in symbiosis with some tiny algae. Those jellyfish are beautiful to observe: when a cloud hides he sun they sink down to more mineral rich water, but rise to the top layer of the lake again when the sun reappears, to profit from the sun. To optimize this, they often tend to even rotate! The larger animals (they can be larger than a foot in diameter) move gently waving through the water, their tiny offsprings frantically moving to keep up with them! To swim in jellyfish lake (snorkeling) is essentially forbidden, for good reason: every movement of hands or fins decapitates or destroys some of those peaceful creatures.