Most Famous Mosques in Istanbul#

Photography by Stanislav Sedov and Dmitriy Moiseenko, members of the AirPano Team that is a member of the global-geography Consortium.

Among the many landmarks in Turkey, the three famous mosques of Istanbul that deserve special attention. The most beautiful one — The Blue Mosque — is considered the greatest masterpiece not only of Islamic architecture, but also of the world.

The Blue Mosque was built after a series of Turkish military defeats. Sultan Ahmed I realized that no new mosque had been built in the city for about forty years, so he decided to please Allah and remedy the situation. The construction began in August of 1609 when the sultan was 19 years old.

The Blue Mosque at night

They cleared out a large area for the construction, taking down several buildings of the Byzantine and the Early Ottoman periods. After that loads and loads of rock and marble were brought in. The name "Blue" was given to the mosque because of the huge (over 20 thousand!) number of white and blue ceramic tiles. An enormous dome 23.5 meters in diameter and 43 meters high was decorated with verses from the Koran and the sayings of the prophet Muhammad. The columns were entwined with decorative lilies, carnations, roses and other ornaments. There are over 50 different designs of tulips alone on the columns of the Blue Mosque in Istanbul! The floors are covered with carpets, and a soft light flows into the mosque through 260 windows.

There is a funny story about minarets of the Blue Mosque. The legend states that Ahmed I ordered to build the usual number of minarets — four. However, the architect made a mistake and built 6 instead. In year 1616, when the construction was finished, people realized that the new mosque had the same number of minarets as the greatest shrine of the Islamic world — Masjid al-Haram, the Grand Mosque in Mecca. It was considered a desecration, but fortunately it had no effect on the design of the Blue Mosque in Istanbul. Instead, one more minaret was added to the Grand Mosque in Mecca, and it again excelled among other such buildings.

Opposite to the Blue Mosque is one of the greatest monuments of Istanbul: Hagia Sophia Museum. The cathedral was originally built by Byzantine Emperor Constantius I in year 324-337 AC. After two centuries of fires and revolts, it was rebuilt again by Emperor Justinian I. The new cathedral was created with such grandeur that it inspired a legend of celestial powers helping the construction. Another legend, however, implied that three annual budgets of the Byzantine Empire were spent on the construction. Well, we see no conflict between the two! 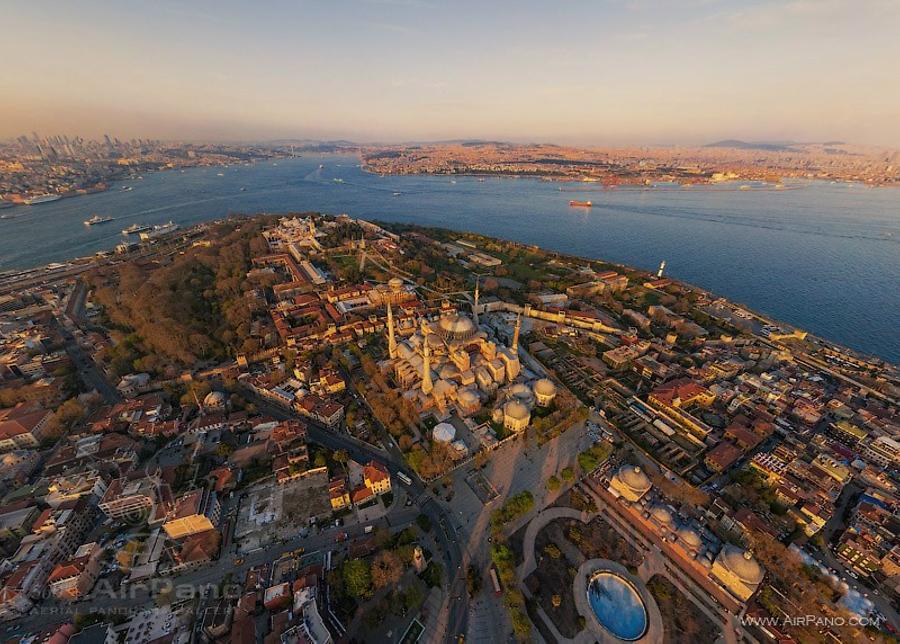 The Hagia Sophia Cathedral in Istanbul had a hard life: it survived an earthquake, a plunder and, finally in year 1453, a conversion by Sultan Mehmed II. At that time, four minarets were added to Hagia Sophia, and after a series of other necessary changes, the cathedral was transformed into Aya Sofia Mosque. Our panorama shows the building in its entire glory and beauty. And if you ever get a chance to go inside, you will see the unique ancient frescos and mosaics, restored after the mosque was turned into a museum in 1935.

And finally, the Suleymaniye Mosque — the biggest mosque in the city. This famous landmark of Istanbul is located in the old part of the city. Architect Sinan built it in 1550-1557 on the order of Sultan Suleyman the Magnificent. Together with its adjacent buildings (educational institutions, bath houses, cemetery and so forth), the mosque forms a complex the size of a city block. The main building alone can fit 5 thousand people! 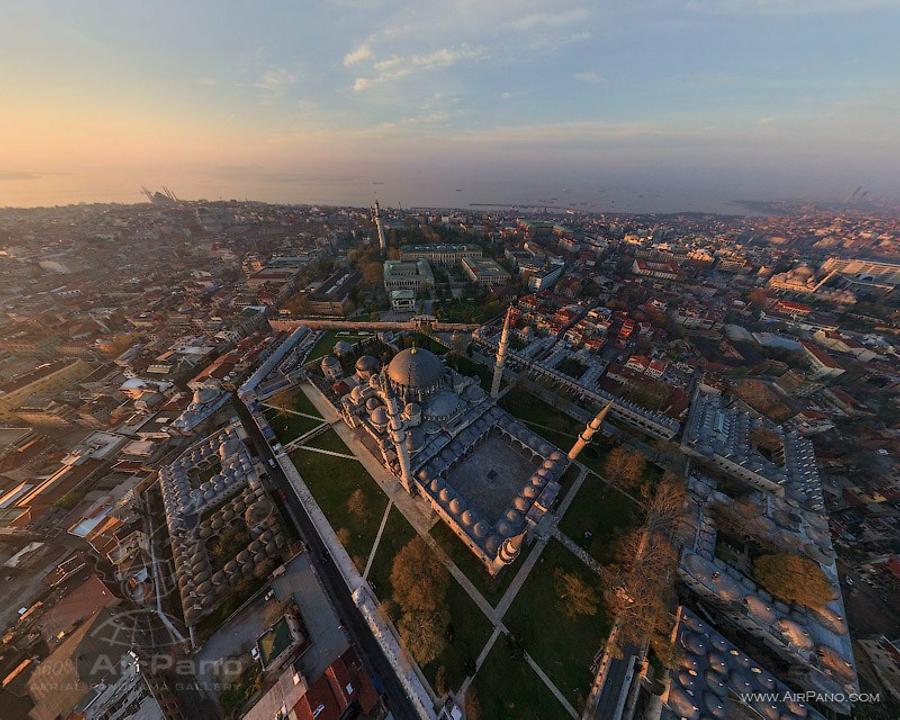 Although Istanbul, a city with centuries-long history, has preserved countless monuments and historical landmarks, these three mosques are particularly beautiful. See it for yourself in our aerial panoramas.

12 Panoramas of Most Famous Mosques in Istanbul