«This September you will go and take pictures of the Putorana Plateau. On your own» — that was the way our director suddenly informed me about this trip in the middle of the summer.

For quite a long time the Putorana Plateau has been the corner of Russia that AirPano could not reach on different circumstances. The main reasons were the poor infrastructure and transportation costs (all equipment needs to be carried in a helicopter). All of them prevented us from capturing this significant place earlier.

«This trip will be "introductory", in a way. There is an organized group, so you will join some tourists and photographers. Just have a look around, make some pictures; if the weather is bad, you can just go fishing, relaxing», our chief carried on as he saw doubts in my eyes... 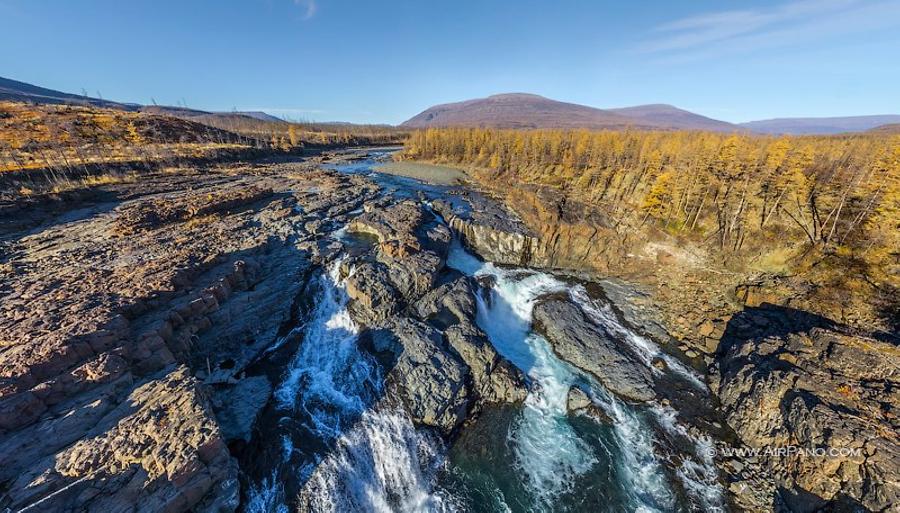 Eventually, on an early September morning I found myself in a group of people under the guidance of the director of the Russia Discovery project Vadim Mamontov boarding a boat that would bring us to the one of the accessible lakes of the Putorana Plateau — Lake Lama. Founded by Oleg Krashevsky there is a recreation camp near the mouth of the Bunisyak river located just at the eastern part of Lake Lama. This place will be our home for the expedition. The distance between Norilsk and this camp is around 170 km, it will take us about 7 hours to cover it.

Soon we found ourselves in the world of the golden autumn. Larches still hadn't lost their amber "dresses". My work began the following morning. To my great pleasure the weather was rather good and for about half a week the sun had been shining. Only in the end of our expedition a typical gloomy autumn began. 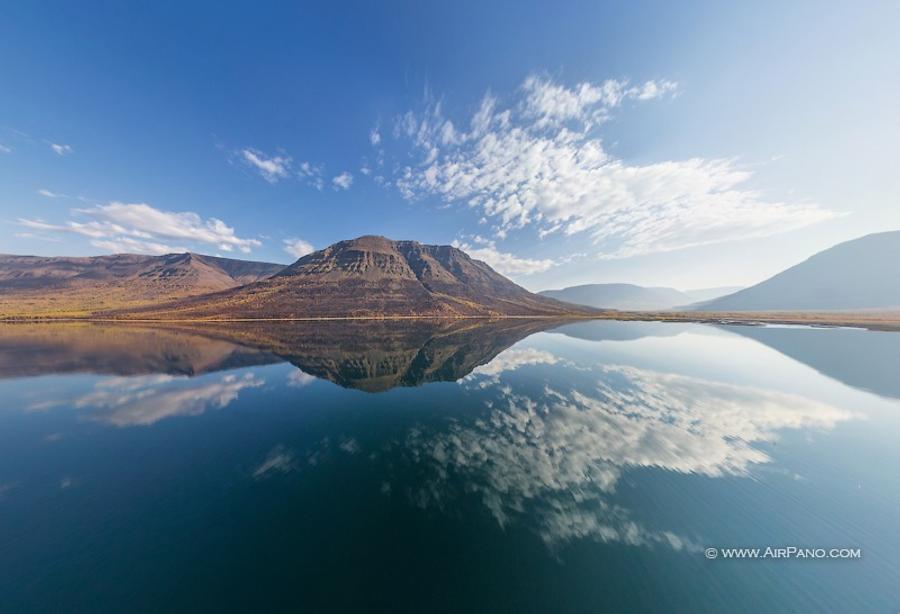 A couple of words about our accommodation. Bunisyak recreation camp was founded on the bank of Lake Lama in the late 90-ies. The owner of the camp is Oleg Krashevsky — a reserve protector, avid ethnographer and passionate collector of Nganasan (local folk) cultural and household items. We lived in the main house and occupied the rooms that were surprisingly comfortable for this kind of remote area. The walls of the first and the second floor halls were decorated with a part of Oleg's collection that he has been gathering for several decades. The stories about Nganasan people and their items are always interesting and our host was ready to talk about them for hours... 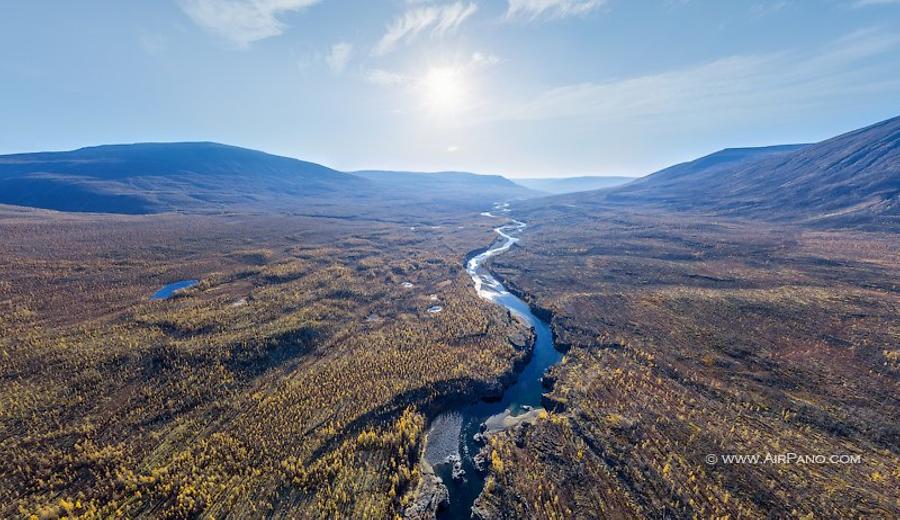 The following morning as soon as I had checked and tested my equipment by capturing the surroundings of the camp, I decided to join the group that went to one of the nearest waterfalls. According to our guides, it was supposed to be an ordinary walk for several hours. But it turned out to be more difficult than I had expected: our drone could hardly pass between the trees, even being partly dismantled. Every time the drone was clinging one or another branch of trees and I expected some part of it to break off. But the most disappointing thing was the waterfall itself: it turned out to be only a thin trickle as the summer was rather dry this year and the rivers lacked water.

What I was left to hope for was a helicopter tour into the depths of the plateau. And fortunately, it met my expectations to 100% amount, although the process of photographing was not an easy one. 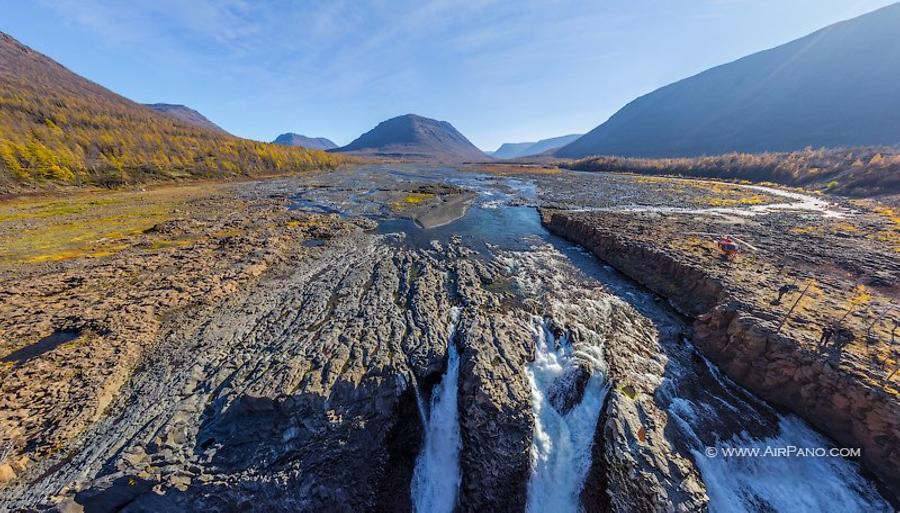 As I have already mentioned, the trip was introductory, so it was decided to share the cost of the flight between other people who wanted to have a tour. Totally there were five passengers aboard: in addition to my person, there was one more photographer, Vadim Mamontov, and three fishermen. Everyone had his own equipment: fishing rods, baits, bags with cameras, drones. Fortunately, the pilot attached a special cargo net, otherwise we had to leave someone in the camp.

Now imagine the scene: the back seat is occupied by four men wearing warm clothes, and one member of our team sitting next to the pilot. During short landings someone else in turn occupied the front seat, so that everyone, except me, managed to have a seat next to the pilot with a perfect view.

I was given the seat near the rear left door which could be opened during the flight. Now I can confidently state that AirPano has never worked in such restrained conditions. Basically, when we rent a helicopter by ourselves for the purpose of photography there is only one or maximum two people on the back seat. 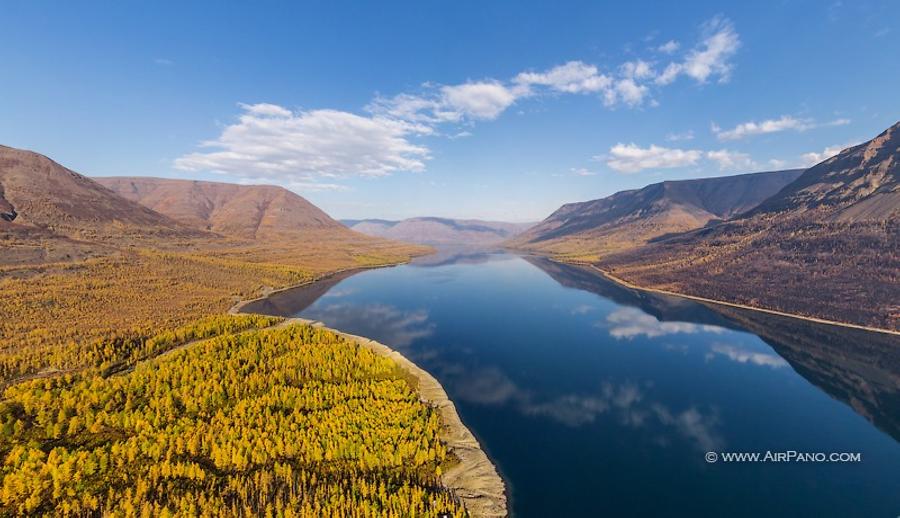 So, during the flight every now and then I opened the door to hang out my telescopic tripod with the camera and equipment, then I had to pull it back in the cabin and occasionally hit someone in the face or other part of the body with the opposite end of the tripod. But my fellow-travelers are to be commended: they bravely withstood this "inconvenience" and no one threw me out of the cabin. But the most challenging thing was closing the door, as we could not properly pull it back due to the lack of space and actually the person sitting in the front had to do it.

Still, all the inconveniences of the flight were forgotten at the sight of the incomparable Martian view in the window. After all, the Putorana Plateau is definitely the place that should be appreciated from above: the scale of this area can hardly be estimated properly from the ground. That's why the idea of photographing on foot was set aside. The breaks between flights from one key point to another lasted 40-50 minutes. The guys used these breaks to go fishing, while me and Vadim took pictures of the surrounding nature.

Of course, one day is not enough to estimate even a tenth part of the beauties of the Plateau Putorana, but I truly hope that this tour will help you to imagine and have a certain idea of how this incomparable wild corner of Russia looks like.