The idea of visiting Kambalnoe Lake and meeting bears there occurred to us in the autumn of 2013, while we were near the Valley of Geysers. At that time we were photographing the most famous places of Kronotsky Nature Reserve, such as the Kurile Lake, the Valley, the Uzon Caldera. Kamchatka was not a region we knew well at that moment, with the only exception of two-days flight over the erupting Tolbachik volcano. We had a good look at the panoramas with bears of the Kurile Lake and we noticed that all the bears are quite young and curious, and sometimes even small bear-cubs managed to get into shot. But where were all the huge adult bears that as we had heard could reach 4 meters height while standing?

We spoke to the animal inspector and complained that local bears were not that big and threatening at all. The inspector showed us a picture on his iPhone demonstrating a dozen of such huge bears pasturing near the rifts of some river. And that was the first time we heard the name ‘Kambalnoe'. 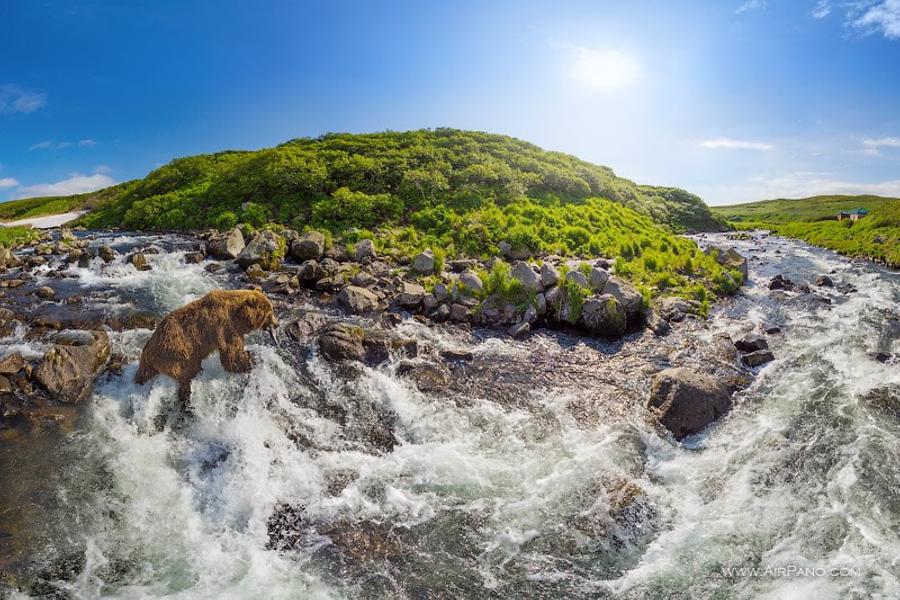 Bear in the Kambalnaya river

Two years have passed since then and the idea to reach Kambalnoe lake finally came true. For our purposes we chose the middle of July. According to our estimations the snow should have melted by then, letting the bears have fun near the rifts. We bought the tickets in the very beginning of April. But it is Kamchatka! The local weather decided to postpone summer for one more month. We were keeping an eye on the Igor Shpilenok's blog, a famous photographer who had settled in a small hut on the bank of the lake in March in order to get news from Kambalnoe. The photos from his blog were foggy and overcast, and even in June the lake was covered with ice. However, the bears had already appeared on the elfin wood formations, while the fish was trying to get through the Kambal river firn. 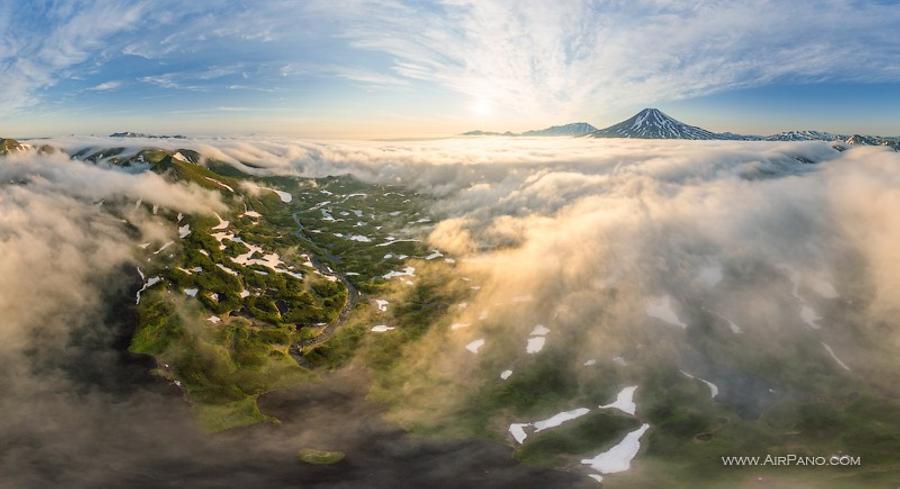 On the very first day of our arrival in Petropavlovsk, were we were warned that the weather is unpredictable throughout Kamchatka. The distance between the Pacific Ocean and the Sea of Okhotsk is only 40 kilometers and the temperature in both water bodies can vary up to several Celsius degrees, provoking strong winds, fogs and cloudiness... The chance to witness the sunny and truly ‘summer' weather was very vague. It was not enough just to get to the Kambalnoe Lake, the way back was a hard task as well. 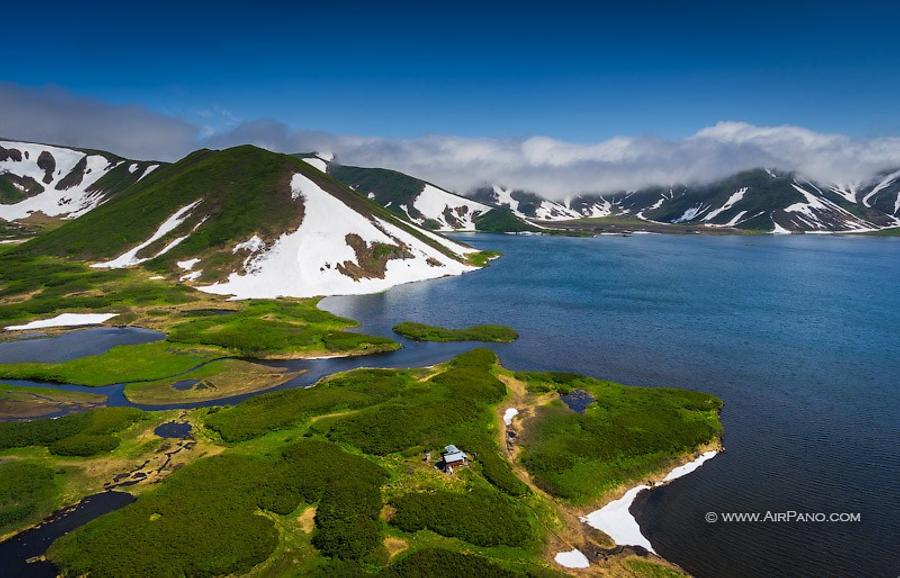 The first thing we did on arrival was get acquainted with our guide and animal inspector Igor Shpilenok. At the place we found two tidy huts with a toilet stall standing 5 meters away from them. One detail caught our attention revealing all the exotic characters of this place: in the toilet we found a hand flare, which can be used for scarring the bears of. Igor warned us that we should be always careful, even when we leave to get fresh water from the river near the huts. Moreover, you had better not leave the hut without a rifle. Actually, we were not willing to leave the hut at all: the temperature was around 10C?, the wind was strong and made the clouds fly furiously in different directions. 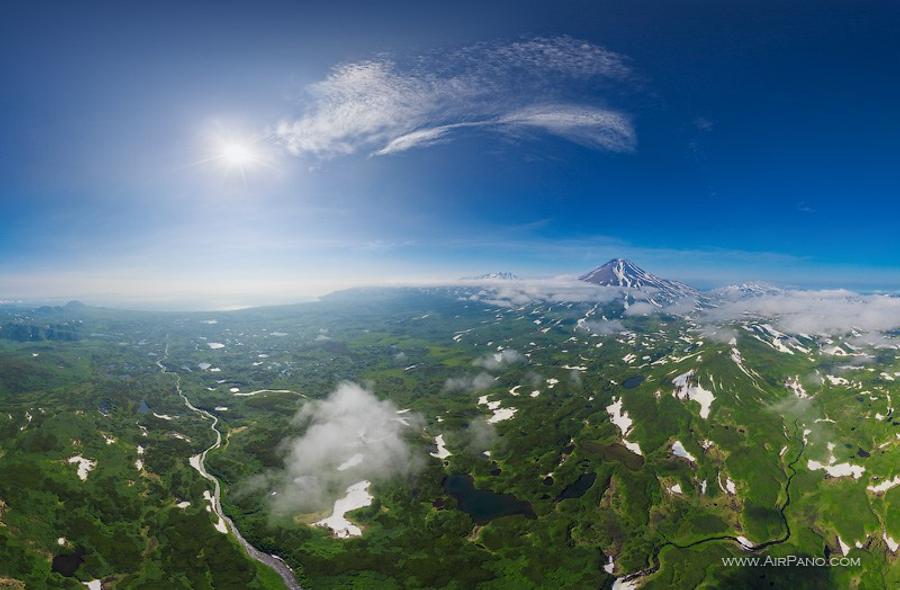 The bears that we intended to take photos of could not be found near the lake, but were catching fish on the river several kilometers away from our huts. In the morning we set off to seek our ‘actors'. At last, the sun came out! It became not just warm, but truly hot. According to Igor Shpilenok, it was the first warm day in the month. But there was a disadvantage as well — a lot of mosquitoes and midges appeared. 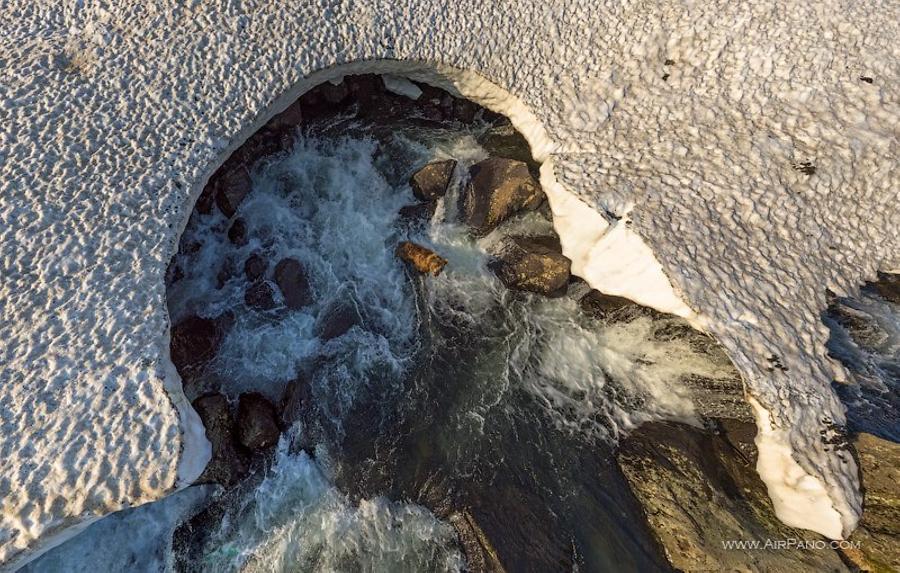 Bear in the Kambalnaya river

Five kilometers down the river we found the first group of bears. We counted six of them. They seemed to be counting us too. Statistics indicate that bears practically never attack a group of three or more people, especially if they stand or walk near each other. Moreover, the smell of three sweaty people can not be compared to the smell of fresh fish, so quite soon the bears forgot about us. Some more bears wandered in the bushes that surrounded us, so we decided to start our work at the moment when there would be at least ten of them within our view. So we sat down and were ready to wait for the bears to gather. But no such luck! All our plans were spoiled by the appearance of a pale-brown female bear, to whom we gave the name of Blondie. At once almost all of the bears sniffed the air and lost any interest in the fish: about five of them followed Blondie and disappeared with her in the bushes... "Well, that's it. Now we have to wait for a long time and, actually, there is a chance that they will never return", — Igor told us. Having spent an hour to realise that the bears are not interested in food anymore, we launched our drone to photograph... only three bears. While we were taking photos of those who stayed indifferent to the female charm, Blondie appeared in the bushes right on the other side of the river and grinned. In a minute, her partner came out of the bushes too and they began making love.

Igor told us that polygamy is their lifestyle. In the mating season the number of males prevails the number of females. And the point is that during the period of cubs upbringing, which can take up to 3 years, female bears do not arrange ‘romantic dates'. Moreover, they keep all the male bears at distance because grown-up bears are cannibals and can eat the young cubs. Therefore, the suspicions of mother-bears are reasonable, so is the unusual interest of the males towards some ‘vacant' females. 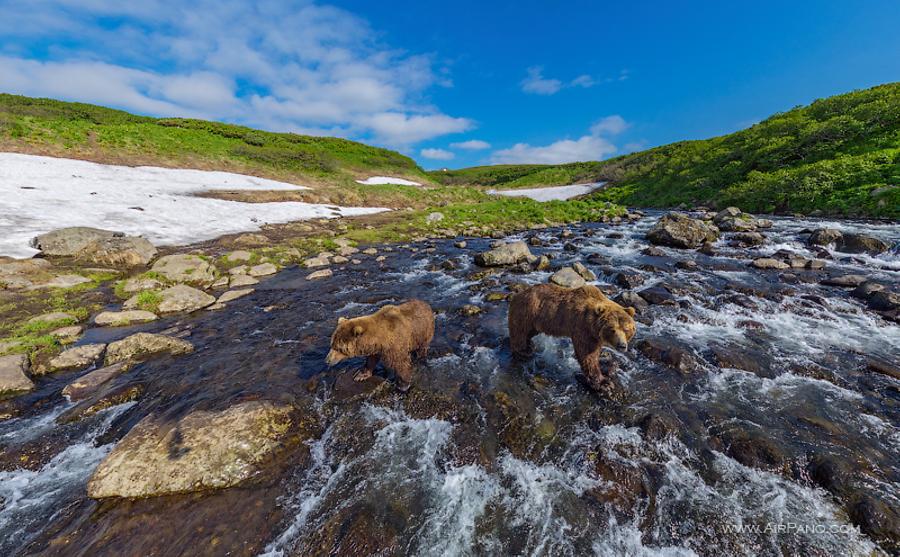 Bears in the Kambalnaya river

As for the weather, we turned out to be extremely lucky! All the days, except the last one, the sun was shining through the thin layer of clouds, the snowflakes were melting, bushed were getting green, the flowers were blooming. During our stay even one starry night occurred, so I made up my mind to step three meters away from the hut in order to test my new Nikon D810A, which is perfectly suitable for astrophotography. (My conclusion is: due to the higher IR range sensitivity one can catch more stars in a shot, even the Milky Way looks more saturated. But the noise at higher ISO remained the same as in the previous model.) 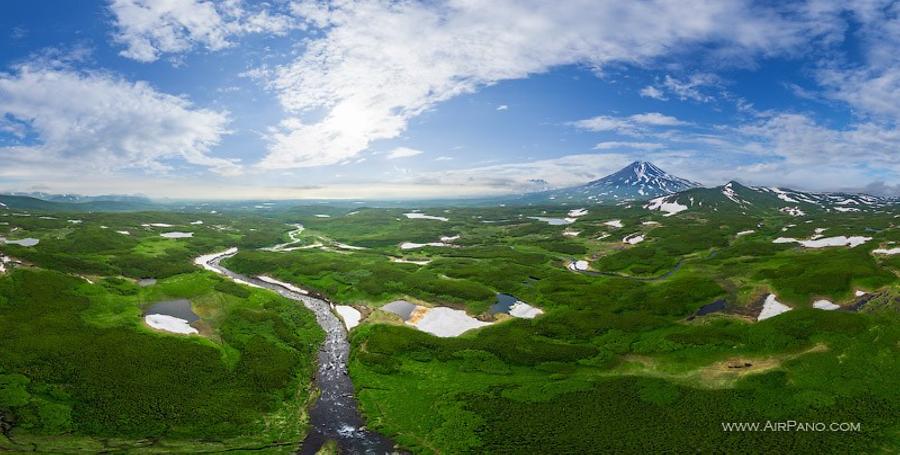 The south of Kamchatka was finally waking up after a long winter. The distance we walked daily was 10-12 kilometers with the vertical drop of 150 meters (I was using my tracker on my smartphone). Our way usually started at the cordon of Kambalnoe Lake and led to the river cordon called ‘Modules'. Somehow the animals were attracted to this exact place.

In a day we got used to seeing bears: when you find around 20-30 of them every day, the sense of caution gets dull and you are not afraid of them anymore. In between the drone flights, we could watch their behavior. Surprisingly, all of them have their own character. For example, little bears liked splashing, jumping, putting their nose and even eyes down into the water and watching red salmons. Efficiency of these actions was quite low, but still they managed to catch some fish in such a way. More mature bears were not in a hurry and took their time. They just sat on a stone with a blank expression, then suddenly their paws flapped on the water, the next moment the fish was pinned on their claws. We even watched a bear who was not catching fish himself but rudely took the food from others. 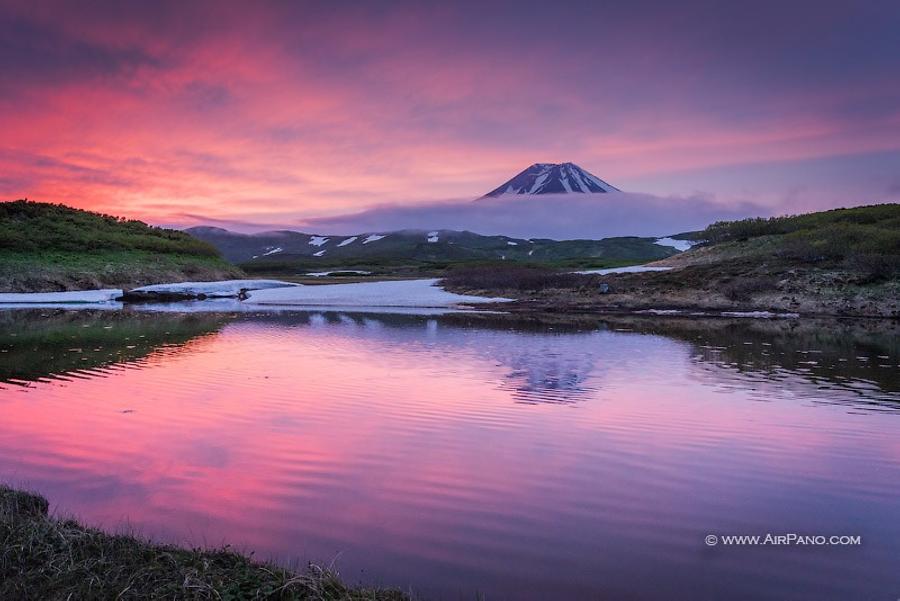 We also managed to create some beautiful landscape panoramas: due to low clouds covering the earth, we could fly over the fogs and got not only beautiful views of the lake, but also a unique shot with both the Sea of Okhotsk and the Pacific Ocean in one frame.

And of course, we couldn't do without some technical troubles. On our second day the power module of our satellite internet device broke down leaving us without any connection to the world. We had left the currency rates, political news, "likes" in Instagram and Facebook in some other life. But Igor Shpilenok suffered more than we did: he could not post the photographs in his blog and reply to comments. All we were left to do was get in touch with our main base in Petropavlovsk-Kamchatsky by the radio once a day.

Bears in the Kambalnaya river

The morning we were scheduled to leave was rainy, the clouds were constantly either rising or going down. Definitely, the weather was non-flying. Using our radio we reported bad weather conditions several times. Though the helicopter in Petropavlovsk was already waiting for a permission to take off, we began to doubt that we would ever reach civilization. But this is Kamchatka! On our probably fifth radio session the sun came out and the blue sky appeared. Thus, we happily reported to Petropavlovsk— Kamchatsky. No matter that the sky was soon covered with clouds again, the helicopter was on its way to us! Having escaped the clouds coming from both Kambalnaya river and the Sea of Okhotsk, the Mi-8 helicopter finally landed. The pilot meaningfully looked at us and told all what he thought of such weather conditions. We felt a bit ashamed of bringing the pilot here and a bit sad at the thought that we were leaving both Igor and the bears, who had become so dear to us. But at the same time, we felt happy to be in time for our catamaran heading for Kuril Islands in a day... But that's another story. 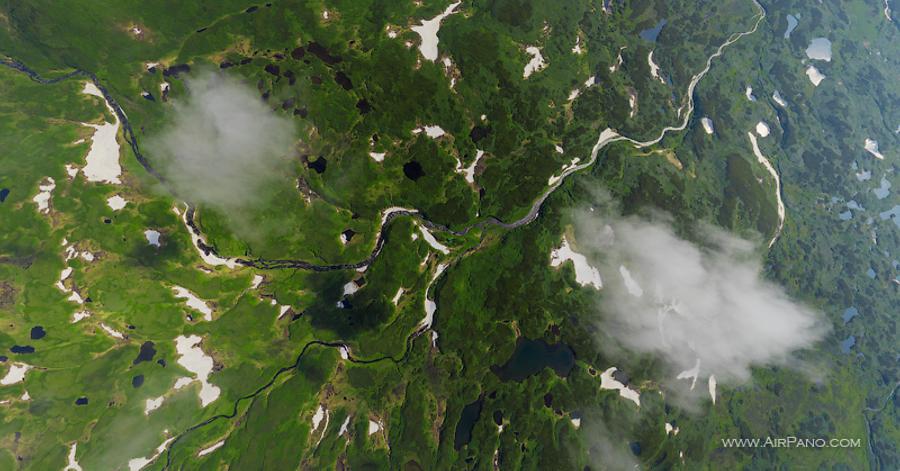