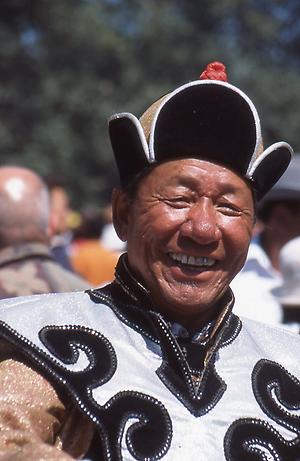 The Republic of Mongolia is the second largest landlocked country in the world with an area of 1,5 million square kilometers.

Its population, however, is only 3 million, belonging to different ethnic groups. The majority are the "real" Mongolians, yet there are also Kasachs, Tuwines and some still smaller minorities.

The very base of mongolian economy and culture is their (still) predominant nomadic style and the breeding of horses, camels, goates, sheep and yak.

Even today a large portion of the population lives in nomadic fashion. This is responsible for the fact that there is no other nation that is as closely associated with horses. The harsh life in a continental climate, burning hot summers but severe winters setting in very suddenly, has made the people a proud, hospitable and eager to learn group: Its history and culture belongs to the most interesting and unique models of life on earth.

A glance into the face of those people says much about them. Do consult the pictures presented with this in mind!

To the German version

Link to a sequence of pictures of people in Mongolia#

Other essays on Mongolia by Professor Jontes:#