Archery at the Mongolian Naadam-Festival#

The country Mongolia (Outer Mongolia, mong. Mongol uls) is the 18 th largest country in the world (over 1,5 million sqare kilometers), yet most of the population of about 3 Million lives in the capital Ulan Bator (mong. Ulaanbaatar) Ulan Bator, Mogolei . Nevertheless, the steppes between China and Russian Siberia are still roamed by many nomadic tribes. They sustain their life on raising horses, sheep and goates and live in their mobile yurts (mong. ger). Their movements are based on traditional routes. The dramatic contrast of the continental climate, with hot summers but the sudden onset of very cold winters has formed their way of life, of their food and of communication.

Mobility is provived for them by their horses. Those also provide milk, cheese and the alcoholic Airaga, the "horsewine" or kasachisch kumys, as it is mostly called. For defense and hunting they rely on traditional bow and arrows. To compare the relative strength of persons they have developed special tpyes of sports, in particular a typical style of wrestling, and rituals carried out wearing special garb for victory and for defeat.

The Republic Mongolia celebrates its national festival 10-13 of July. It is called Eriin Gurwan Naadam, Naadam for short. This translates into "the three games of men". The three competititon are wrestling, archery, and horse-racing. Despite its name women are also participating in the archery competitions.

The biggest Naadam takes place in the capital Ulaan Baatar. However, there also such events in other parts of the country with their local champions.

Vor spectators the most interesting event is the archery competition that takes place in a special area on the outskirts of the city. 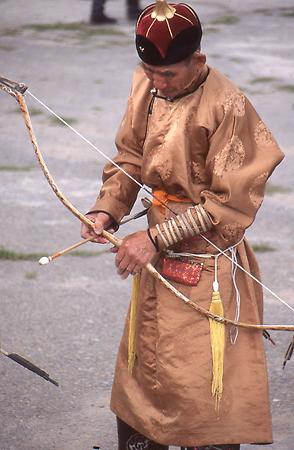 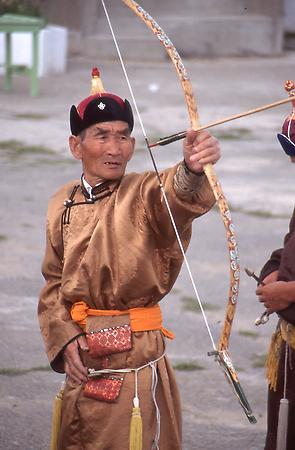 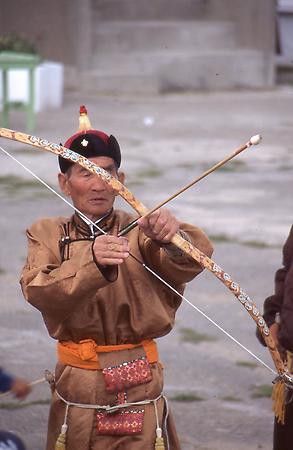 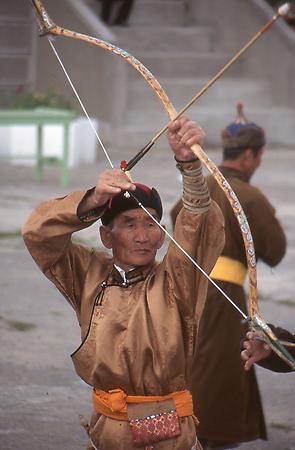 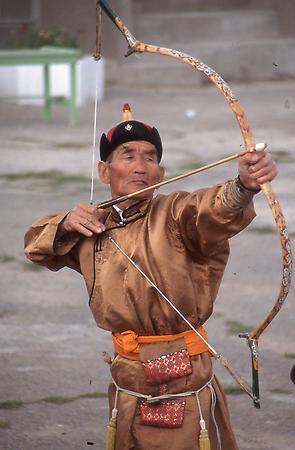 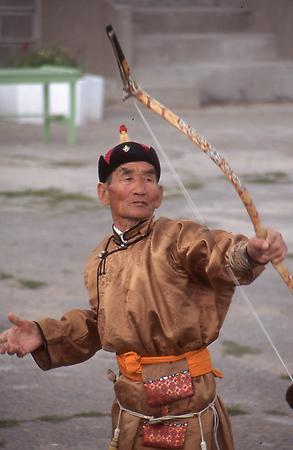 In a number of rounds that each excludes some competitors from continuing, they shoot at an aim that is not a circular target board but consist of a number of small baskets (mong. khana) located on the ground. The arrow is not supposed to pierce the target but to move it. Therefore the head of an arrow (mong. sum) is not sharp, but is dull and made of wood.

A number of judges near the targed area observe the results and announce their judgements by certain songs, movements of arms and a kind of "bird's dance". All wear traditional costumes (mong. deel).

Arrows are transported in quivers (mong. khegenyg). During the competition each participant places a bunch of the arrows on the ground and sticks 2 or 3 into the belt worn. Arrows are about 75 cm of length and are made form willow-wood. Arrows have some feathers (mong. ude khaomon) for guidance, usually feathers of birds of prey. In the past there were also competitions testing how far it was possible to shoot: distances of 400 m have been reached.

The Mongolian bow (mong. nomo) is made of a composite of materials. It is of middle length and high tension force. This is why some fingers and the left lower arm need special protection. The bow is based on asian bows of horse-riding warriors and hence differs from the European "long-bow". Production is difficula and needs lots of experience. It is laminated from wood and horn. Competitors are particulary proud if they shoot with bows made by themselves.

Women and boys are allowed to participate in the Naadam archery contests. For men the distance is 75 m, for women 60 m, and for boys 40 m. 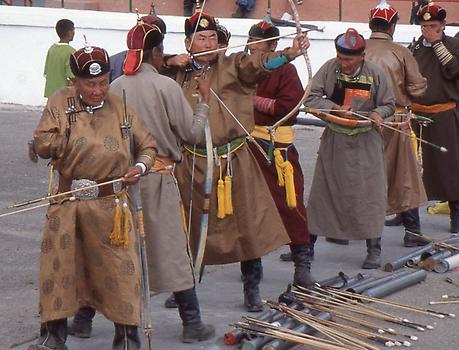 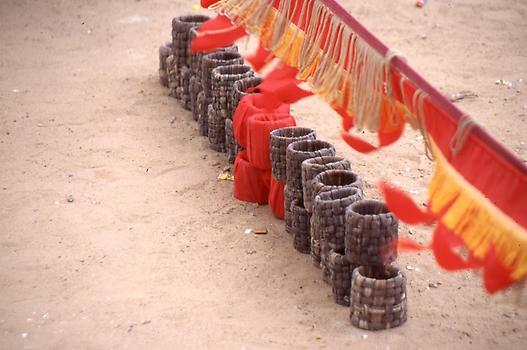 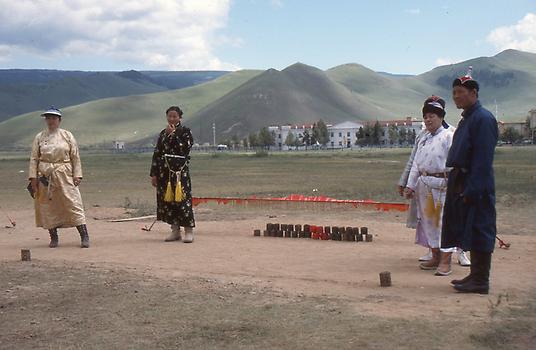 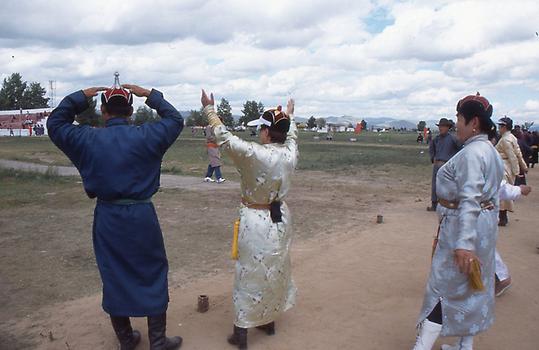 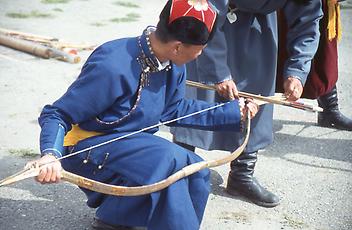 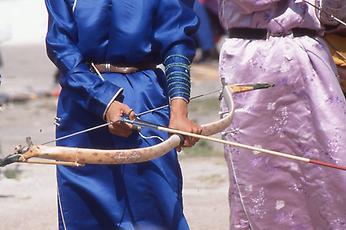 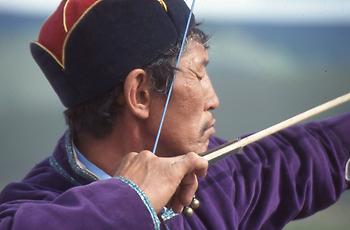 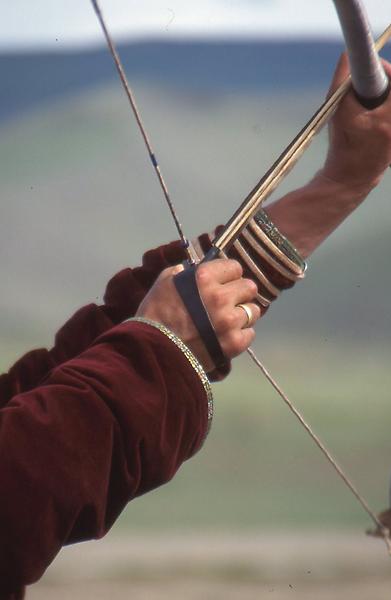 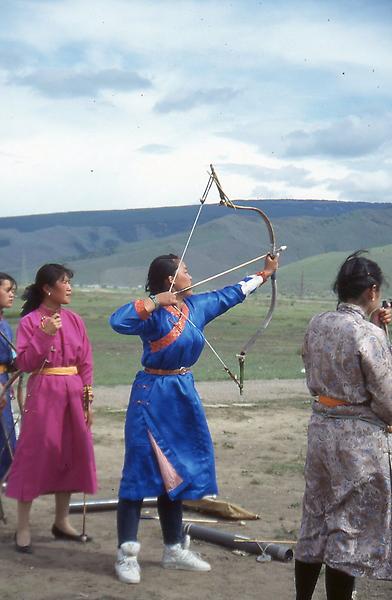