All photos were taken by the author in the village Mandigalmund near Utakmand/Ooty in 1984. They all belong to the "picture flood" of the archive Jontes. The embroidery samples are part of the collection of Asian textiles of the author.

In the Nilgiri Mountains in the federal state of Tamil Nadu India, Tamil Nadu in South India a special tribe of no more than 700 to 900 members is surviving - an ethnic minority that has aroused more than others the particular interest of ethnology. It is the Toda, whose appearance, customs, religion, food and economic system as ranchers of water buffalos distinguish them completely from their agricultural Dravidian neighbors.

Their villages (mund) consist of three to seven thatched cottages (dogle) with rounded roofs resembling half a barrel. Their temples are built in a similar shape, but they are decorated with special ornaments. Only the priests of their independent religion - which has nothing to do with customary Hinduism - are allowed to enter them. The temples are laid out in round hollows in the ground and surrounded by monoliths to define the sacrosanct area. Women may neither enter this area nor even pass close to it. 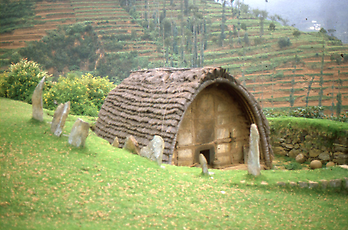 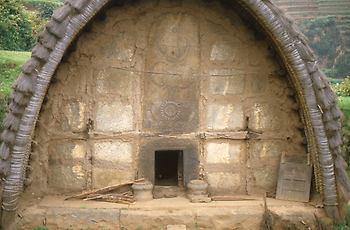 The religion of the Toda is entirely focused on buffaloes, those very useful animals. Special priests practice ritual acts related to them.

The priests can be described as quite aloof "holy milkmen". They are subject to many restrictions in their appearance, have to live in the temple at all times and remain single. As long as the priest holds his office, he neither cuts his hair nor fingernails. He does not take part in death ceremonies, not even when members of his own family are concerned. 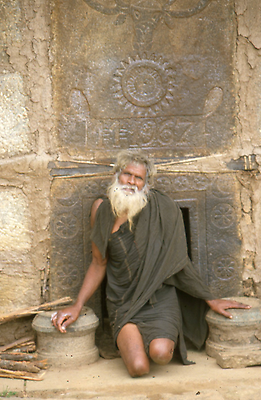 The „milkpriest“ Narikeyen in front of the temple of the village Mandigalmund, built in 1962, under CC BY 4.0 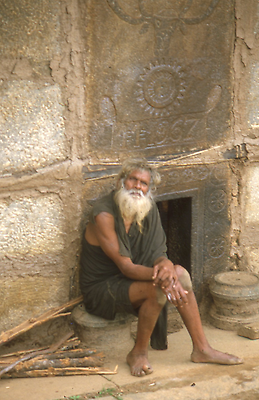 The „milkpriest“ Narikeyen in front of the temple, under CC BY 4.0

Also their myths refer to buffaloes. Together with her brother the goddess Teikirshy created the first Toda-man at some stage. From his right rib - what a striking parallel to the Mosaic creation myth! - the first Toda woman was formed.

Certain customs limit the mobility of these people: The Toda may not cross rivers or streams on bridges. They must wade or swim through the water. In former days a polyandrous life was practiced, that is, a woman was married to a man and all his brothers. The resulting children were associated with the oldest brother. In this way and just like in other polyandrous societies the population was kept low, thus handling the scarcity of food. Even the physiognomy of Toda distinguishes these people from their dark-skinned neighbors. 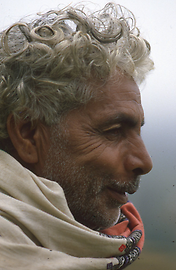 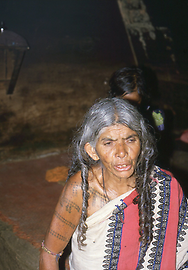 Tattoos are also common on women, under CC BY 4.0 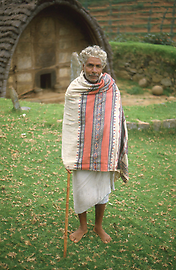 Their economy is concerned exclusively with the production of milk and its processing into butter, buttermilk, cheese and yogurt. Fresh milk is also used as beverage. Thus it is clear that they depend on their well-guarded herds of water buffaloes. The products of this dairy economy are sold to their neighbors that are cereal and rice farmers. The Toda are vegetarians, they do not eat meat, nor eggs or fish. Rice bought from the neighbors is part of their culinary everyday life and is eaten with dairy products or as curries.

Even in clothing these people differ from their neighbors. Their clothes consist of a single large shawl (outer garment) worn over the dhoti, the Indian wrap skirt, by men and over a skirt by women. This robe is called Putukuli.

The Toda command great skills in weaving and embroidering. Particularly the ornamental embroidery has led to impressive beautiful and tasteful ornaments. 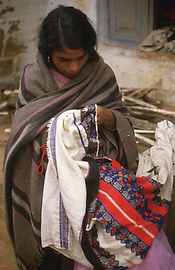 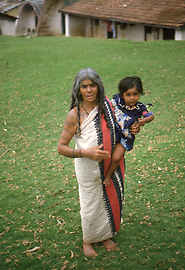 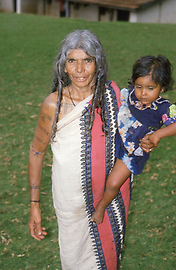 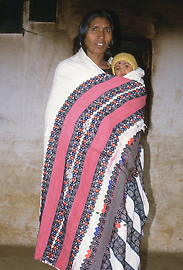 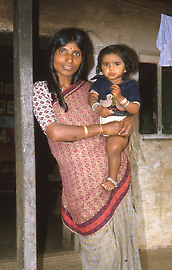 Traditional embroidery is now threatened by printed material, under CC BY 4.0 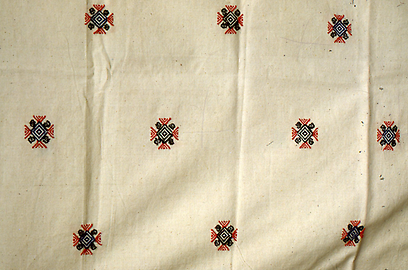 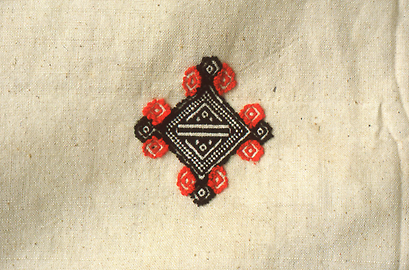 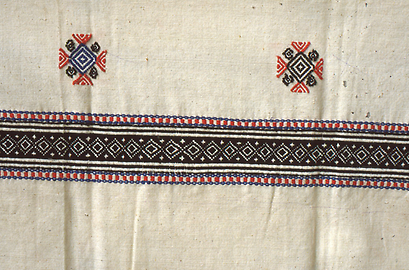 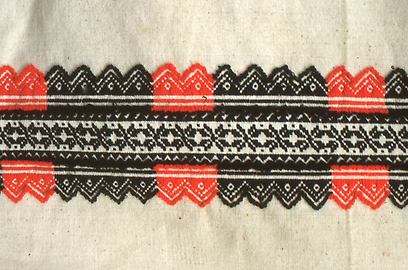 That the Indian Indus-cultures with their main sites Harappa and Mohenjodaro could have been in communication with the Sumerians has - in any case - been discussed for a long time.

Today, the Toda community is part of the Indian Nilgiri Biosphere Reserve and was declared a UNESCO World Heritage Site.