As you might know, almost all followers of Hinduism live in India, and no wonder the world's largest Hindu temple is situated in the capital of India.

Speaking of Delhi landmarks, one would traditionally mention Red Fort, Qutub Minar, and India Gate on Kingsway. So how come Swaminarayan Akshardham (which means "temple of the God"), a magnificent and beautiful temple, is not so famous? The answer is simple: it is very "young".

It was opened in 2005. The construction took over 5 years and involved 7 thousand artisans and 3 thousand construction workers from all over India. Their combined efforts gave birth to a building 42 meters high, 94 meters wide, and 106 meters long. The structure of Akshardham consists of 234 pillars, 9 shiny domes, 20 four-sided towers, and over 20 thousand figurines depicting themes from Indian mythology. There are over 148 statues of an elephant alone! 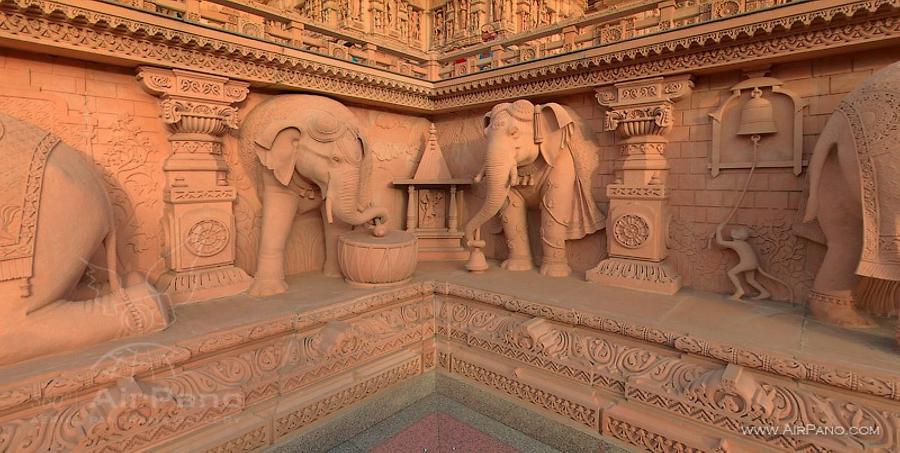 Thanks to its enormous size the temple is included in the Guinness Book of World Records. The temple complex takes up 12 hectares of land and includes the temple itself, several parks, a museum, a large cultural center where one can learn about Indian traditions and customs, water canals, which you can traverse by boats, and lots of cafes and souvenir shops.

Every evening there is a laser show with dancing fountains on Swaminarayan Akshardham grounds. The fountains are built in the form of a lotus placed inside a large bowl-shaped basin. The inner side of the basin serves as steps and benches for thousands of viewers. 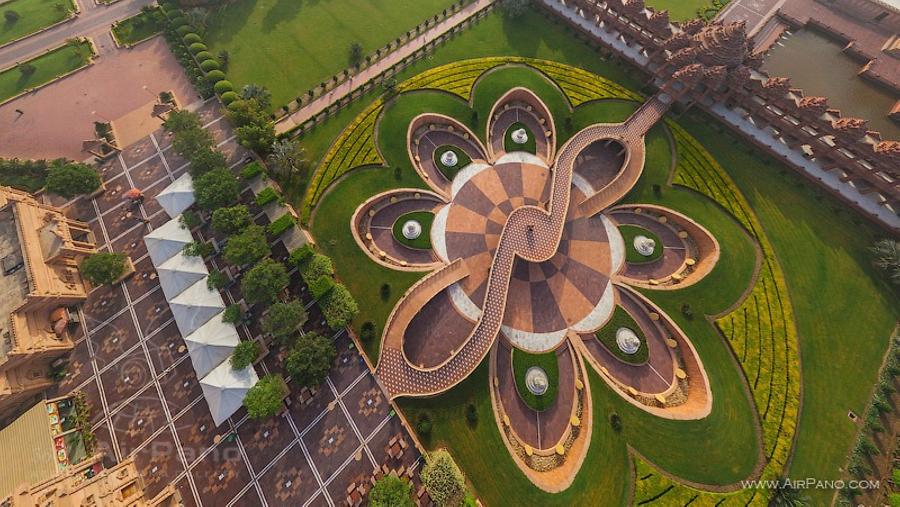 Construction of this beautiful site was funded by donations and done through a spirit of volunterism. In order to fill in all man-made lakes and canals surrounding the temple required huge supply of water from 151 ponds around the country. In a country, where clean water is as precious as gold, it was quite a generous donation as well.

Let's take a moment and listen to Stas Sedov's story about the photo shoot.

During last days of our trip across India we planned to shoot several sights in the capital of the country: Red Fort, Qutub Minar, and others. We didn't plan to photograph Swaminarayan Akshardham. We knew that we couldn't even bring a cell phone inside the temple, not to mention other heavy photo equipment. However, our success in Taj Mahal encouraged us to request a photo permit for Swaminarayan Akshardham.

When we entered the temple first time we had only one document in our hands: photography permit for Delhi and Taj Mahal. At the time we were not sure what to expect, but we decided to take our chances anyway. Even if we failed with a permit, at least we would see a new wonder of the world.

The next thing we know, we are talking to the middle-age man from the local administration. It's hard to remember what exactly we were talking about, but we got him interested in our project. At the moment he didn't give us a definite answer. But he did ask us to give him time to see if it was possible to get permit for aerial photography. Meanwhile he assigned a guide to give us a half-hour tour around museums and the temple grounds.

To tell you the truth, I didn't know of Swaminarayan Akshardham existence. For me it was just another Indian temple. But that was before I entered its premises... 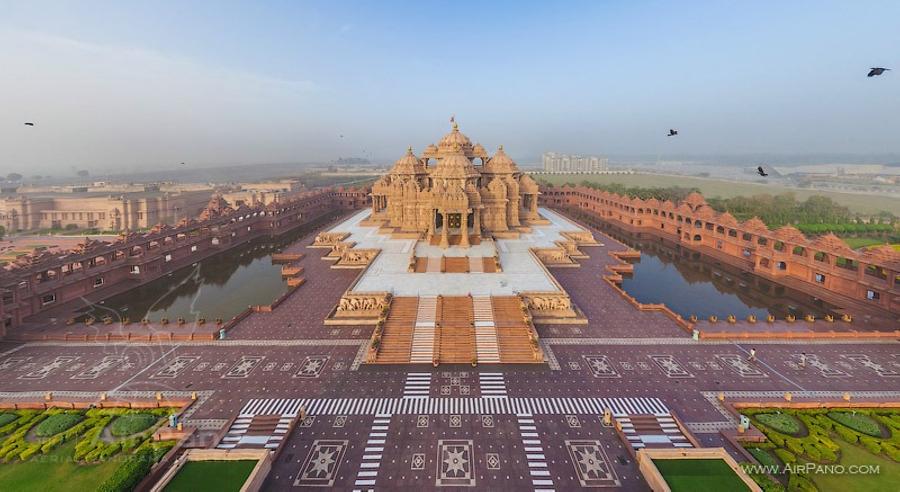 Usually, at the end of every trip, when almost every day you see wonders of nature and artisan masterpieces, your emotions get "washed out". It is very unlikely that something would be able to surprise you. But this was an exception! To say that I was surprised is to say nothing! I was smitten by the grandeur of the idea and its magnificent implementation in stone. It's hard to describe the range of feelings you experience while walking the grounds of Swaminarayan Akshardham. You feel harmony, tranquility, and strength of your spirit. The only time I experienced something similar was during my visit to the Meteora monasteries in Greece.

Our guide told us that the temple has no iron elements in its structure, and no cement. The concrete was used only in the foundation. The rest was made of stone. Marble and granite for the construction was delivered from all over the world. It was processed using special technology, and then joint together. All pillars of the temple are stacked, and all stone elements are turned 90 degrees after being connected. It was done to provide seismic resistance in case of earthquakes, which sometimes happen in India. Imagine the level of precision required for stone processing to assemble this big "puzzle". 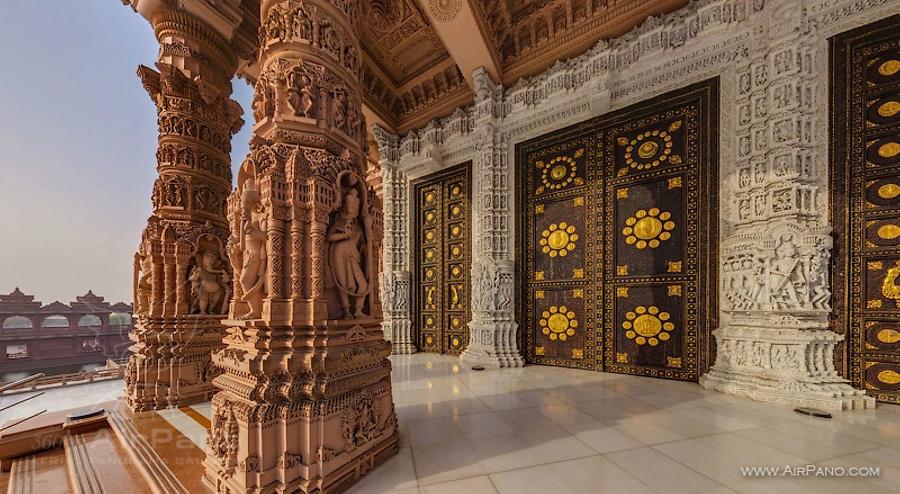 Beside the buildings' structure, wall facing is quite impressive: stone figurines cover the walls all around! The size of the carvings ranges greatly: from actual size to palm size, but even the smallest figurines have the highest level of detail.

The time of our excursion flew by. I was heading toward the exit, but felt confident that we would be back here.

We were called the following evening and granted the permit to photograph Swaminarayan Akshardham. Our first photo session was scheduled early in the morning, just before the site opens for tourists. Pigeons, flying in the morning sky, quickly welcomed our RC helicopter to their flock.

It was the most comfortable photo session we had in India: both by the atmosphere and the working process. Everything indeed went very smoothly. The temple security arranged an area for us in the center of the alley for the night shooting. The temple lighting was switched on 15 minutes earlier than usual especially for our photo shoot. We just couldn't do a bad job in these perfect conditions.

Leaving premises I realized that I had just completed my most important photo shoot in India. It wasn't Taj Mahal that won me over in this extraordinary and amazing country, but Swaminarayan Akshardham! I truly hope to return to this temple one more time someday.