Text and presentation by Airpano. Photos by Stas Sedov and Dmitry Moiseenko

Agra, a significant Indian city, had been the capital of the Mughal Empire for only one hundred years: from the middle of the 16th century till the middle of the 17th century. But even such a historically small period was crucial not only for the development of the city but also for the world's cultural heritage. This was the very time when two key monuments of the city were constructed: Taj-Mahal and the Red Fort (also known as Agra Fort). Both them were listed as World Heritage Sites by UNESCO. 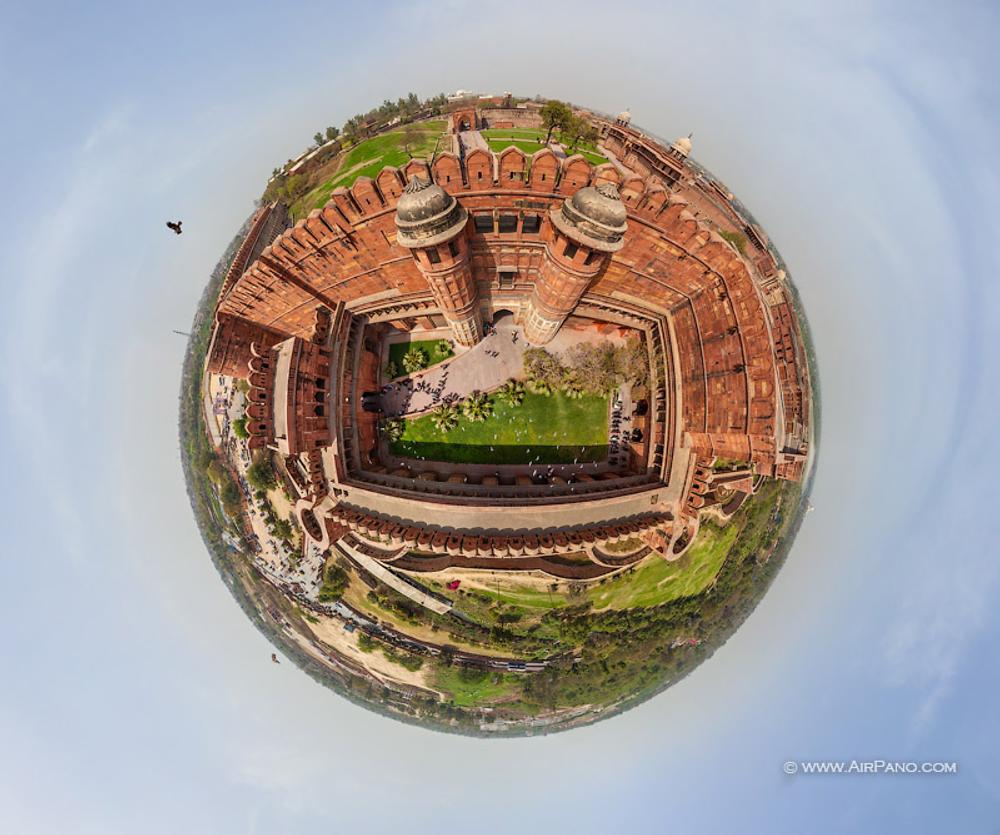 In 1558, as soon as Agra became the capital the need for the construction of a respectable residence for Akbar I (the Great), the ruler of the Empire, was obvious. An old dilapidated fort built by the previous owners of the city was chosen for this purpose. By 1571 the restored construction had been fully surrounded by new walls made of red sandstone. Later, the successors of Akbar the Great enlarged the fort and added some decorative elements made of white marble, gold and precious stones. 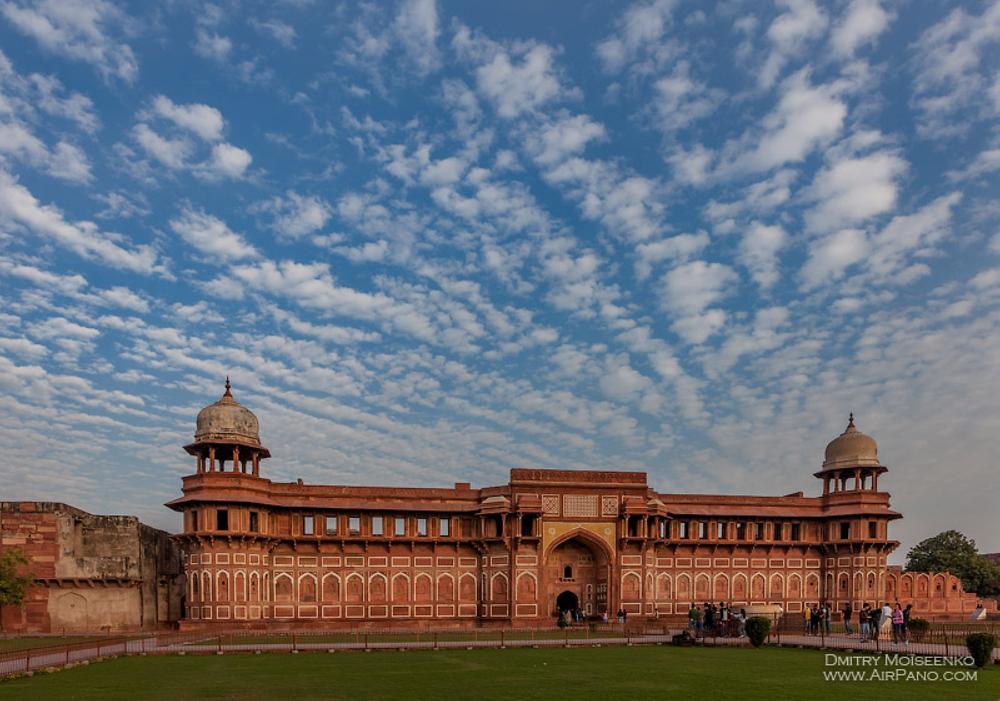 The architectural style of the Red Fort successfully united Islamic and Hindu traditions. The governmental complex, designed in a crescent shape, occupies the total area of 380,000 square meters and is surrounded by a deep ditch and a wall stretching for 2,4 kilometres and raising at 21 meters. The gates oriented to four cardinal directions once had suspension bridges. The Delhi Gate served as the main governmental entrance to the fort. Exquisitely decorated, this construction is considered to be one of the greatest architectural monuments of the Moghul Empire. 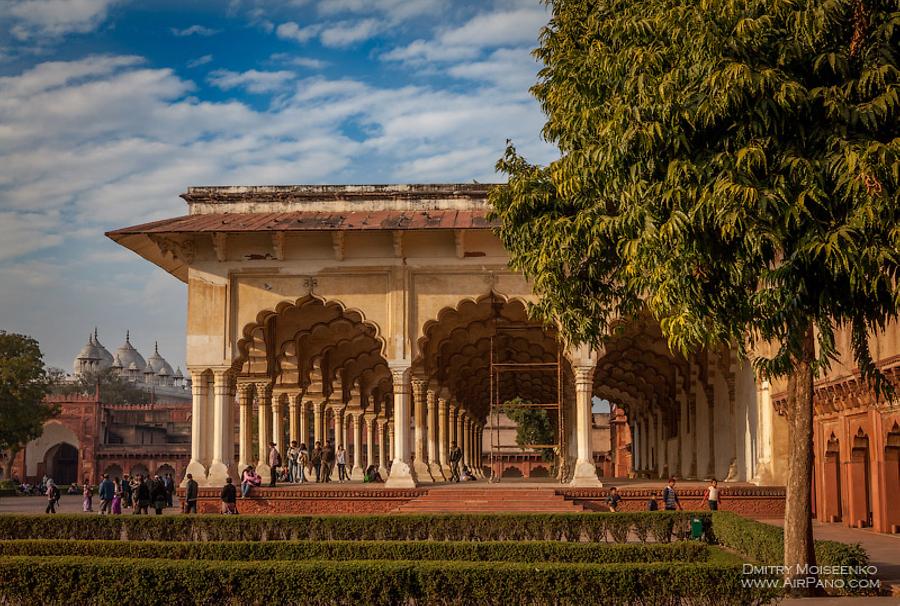 Agra Fort Diwan I Am (Hall of Public Audience)

The number of buildings that once had been located inside the fort — palaces, mosques and other constructions, in addition to numerous gardens — is estimated to be around 500, but the major part of it had not survived by now. First, Shah Jahan, who became the padishah in 1627, demolished some of the constructions in order to make way for his white marble palaces (hardly one can reproach the person who created the great monument of Taj-Mahal for making such a decision). Later, the fort was seized by the British in 1803 and the most of other exquisite buildings were destroyed and replaced with barracks. Treasures and precious stones decorating the walls of the buildings were looted.

Half a century later the fort became the site of a very important historic event: the Indian rebellion of 1857 (Sepoy Mutiny) against the rule of the British East India Company. Nowadays the fort is a major cultural and historical monument, although it is not fully open for tourists. A part of its territory around the Delhi Gate is used for military purposes. 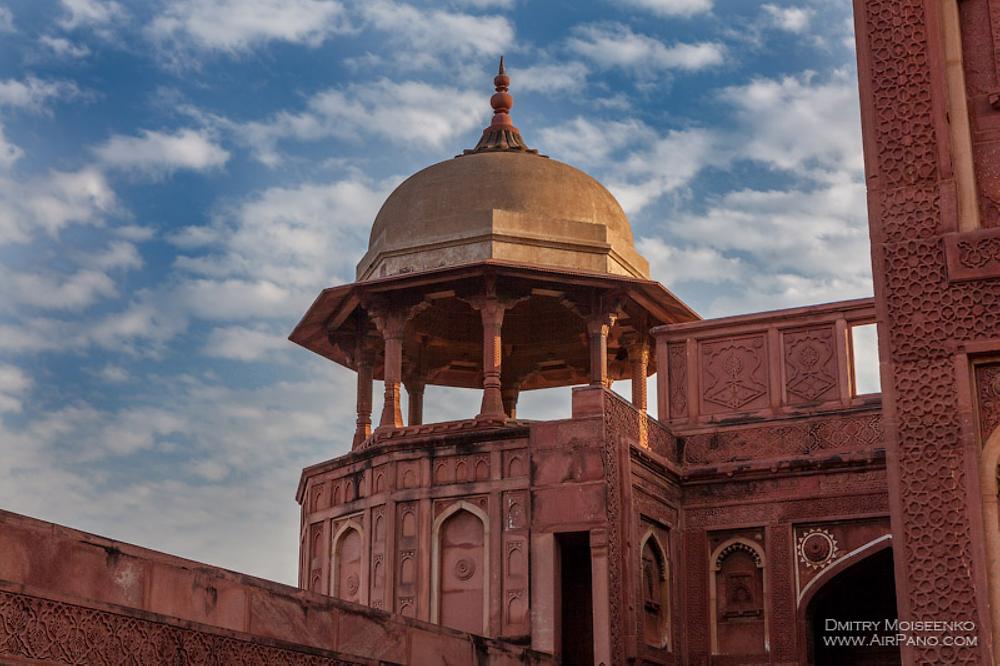 But even those parts of the Red Fort that are still accessible for visitors can impress and reveal the beauty of these places and offer interesting museums. Moreover, the windows of certain buildings overlook the famous mausoleum of Taj-Mahal, which stands only 2 kilometres away from here.

We are inviting you to visit Sheesh Mahal (the Mirror Palace), Jahangiri Mahal, Rang Mahal (the Palace of Colour) and many other significant and incredible constructions of the Red Fort that will look especially outstanding and colourful from the height of the AirPano panoramas.