The most "non Indian" double captial of Punjab and Haryana# 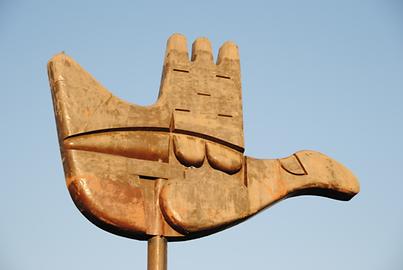 The open hand, the modern symbol of Chandigarh
Photo: G. Jontes, under CC BY 4.0

Already in the Middle Ages inventive spirits have tried to control the misery of growing settlements by planning their structures. Towns were surrounded with walls, towers and gates. Right-angled intersecting roads around large central places were created inside. King Ottokar II of Bohemia was also fascinated by such "city-planning". The East Prussian town Königsberg was named after him. After the Baltic military campaigns, Ottokar II started the colonization of eastern Germany. Around 1260, as a temporary Austrian and Styrian prince, he made sure that the Styrian town Leoben got an "orderly" appearance. The planned city of Mannheim is a more recent example of the early modern period. And probably the most famous example is the capital of Brasil: Brasília was planned and developed by Lúcio Costa and Oscar Niemeyer in 1956 in order to move the capital from Rio de Janeiro to a more central location. The landscape architect was Roberto Burle Marx. The city's design divides it into numbered blocks as well as sectors for specified activities, such as the Hotel Sector, the Banking Sector and the Embassy Sector. Brasília was chosen as a UNESCO World Heritage Site due to its modernist architecture and uniquely artistic urban planning.

In the 20th century existing cities were hardly manageable because of the industrialization and rural exodus. One of the first radical exceptions was the founding of the capital of the tropical giant Brazil mentioned above, following a resolution of the Government. Brasília as new capital was placed in a virgin area of central Brazil. Initially, the project looked like an act of madness. It took decades until the planned infrastructures were filled with life. In the late seventies the city blossomed; the idea to have no traffic lights, but strangely elongated traffic circles and some road-segments designated to be driven on the left rather than the right proved ingenious. Todayday, everything has changed again, since the city was built for some 500.000 inhabitants maximum, and not for the some 2,5 million of today. Hence there are now traffic lights and traffic suggestions, but the basic concept of sectors and "superquadros" (formin vilalg esized communities within a big city) has shown remarkable but not total success.

One of the most famous architects of the 20th century, the French-Swiss Le Corbusier (1887-1965) was able to implement a similar project in India. In 1947 the East Indian colonial empire was granted independence. It was under terrible labour pains due to the break-up into two new states: India and Pakistan. The Punjab was arbitrarily divided by the British, and India was forced to found a new capital for its part. It was realized near the village Chandigarh, where sufficient land was available for a new city. At the special request of the President Jawaharlal Nehru, Le Corbusier was invited to do the planning. The foundation stone was laid in 1952. In 1966 the plans were implemented. Meanwhile, the Indian government had decided to divide its Punjab again. In 1966 a Hindi-speaking own new state called Haryana was founded. Chandigarh was declared the capital of both territories.

The town consists of sectors of which each is assigned a certain purpose. Corresponding to the architectural style of the period, everything is carried out in concrete and thus has nothing in common with the grown environment of Indian towns. It took a long time until Chandigarh changed into an Indian town. Today the town has around one million inhabitants.

As a parallel world the Rock Garden was created in the eighties of the 20th century for the amusement of masses. It is mainly frequented by the youth who are not so strict about the conventional barriers of genders.

While the city has hardly anything interesting to offer, a visit to the Rock Garden is recommended. The local designer Nek Chand has mixed cheerfully tradition and modernity. Village pottery is combined with waste products of civilization. Humans and animals composed of millions of broken fragments meet in merry crowds. Have a look!