The Angel Waterfall found itself in the very heart of the Canaima National Park in Venezuela, not far from the border with Brazil and Guyana.

A small old "Douglas" was on its way to bring us from Puerto Ordaz to Canaima. The bigger part of the car was occupied by our suitcases filled with equipment. Through the windows we could see the tepuis, the famous table-top mountains. Over the edge of one of these mountains, Auyan-tepui, the world's highest waterfall drops.

The story of its exploration is rather unusual. On November 14, 1933 an American aviator Jimmie Angel flew solo over the Devil's Canyon in search of gold ore beds. On his return he spoke of an "incredible waterfall falling a mile down". No one believed him, though.

Four years later he returned to Venezuela. This time he was accompanied by his wife Marie (a co-pilot and a navigator) and assistants Angel Delgado, Gustavo Heny and Felix Cardona.

At first, Heny and Cardona attempted to find a way up to the top of the mountain by land. They spent two weeks doing so, but all in vain. On October 9, 1937 the plane of the expedition took off at the foot of Auyan-tepui. Cardona stayed in a camp. James Angel managed to land atop the mountain into the marshy ground and broke the wheels. Realising that there was no way to mend the plane, the team was forced to descend the tepui on foot. Before they left, the head of the expedition insisted on getting the nose of the plane out of the mud; Angel strongly disliked the idea of leaving the airplane with its propeller buried in the ground. They also made a sign "We're OK" with some clothes on the wing of the plane and set off. It took them 11 days to make their way to an Indian settlement and then finally back to civilisation on boats.

The news of their adventure spread quickly and the waterfall was named after the discoverer, in honour of James Angel (the common Spanish name is Salto Ángel, the "Angel's jump"). The plane remained on top of the tepui for 33 years. In 1970 it was dismantled and transported to the Aviation Museum for restoration. Now the airplane sits outdoors in front of the airport at Ciudad Bolívar. We saw the legendary vehicle with our own eyes! 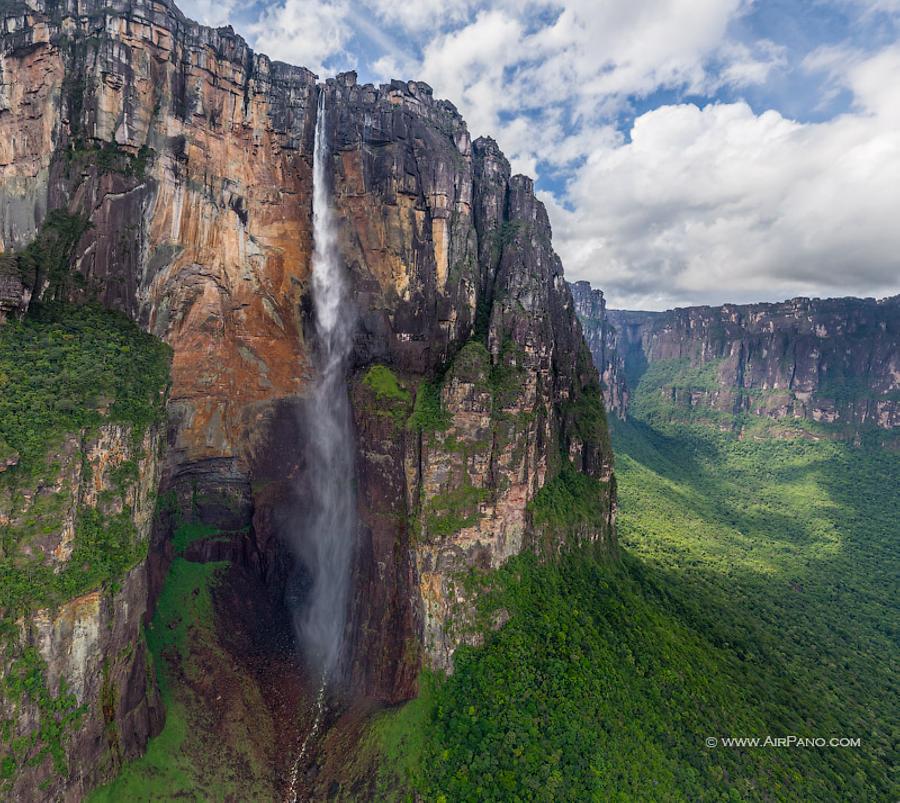 Even nowadays the way to the waterfall is not an easy one. It can be either a several hours trip up the river in a boat from the Lagoon of Canaima or a flight on a helicopter or an airplane. We decided to try both and compare them.

Our plans changed on the very first day. The helicopter that was arranged to carry us broke down, so we had to postpone the flight for a couple of days. We spent this time exploring the lagoon and the nearby waterfalls. But the day of a flight soon came, we loaded our equipment in a yellow helicopter that brought us to Auyan-tepui. In half an hour we were at the foot of the mountain.

The mountain tops are often covered with clouds not allowing to see anything. This time was also the same — the waterfall was hidden by the mist. We spent more than an hour waiting for the sun. Finally, the clouds parted and the helicopter started to gain altitude. The height of the waterfall is almost a kilometre and while we were raising to the needed height, Angel Falls again was hidden in the mist. In order not to loose the altitude and our time, the pilot decided to land the helicopter atop the mountain. Thick clouds were surrounding us, but our experienced pilot found a glimpse and we safely landed on the top, to the great surprise of hikers that encamped there. It took them several days to get there, while we spent only an hour. 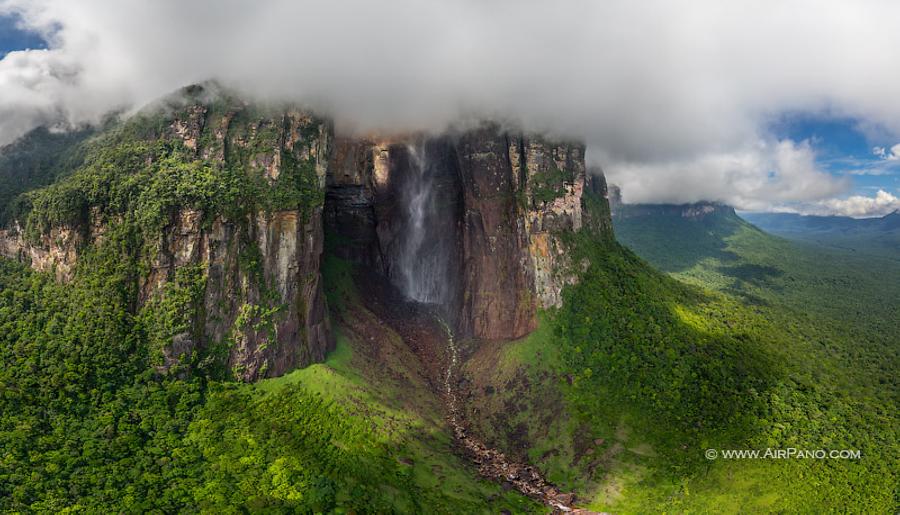 In the company of hikers we waited for the clouds to make scarce and took off again. Our pilot, a genuine master of flight control, guided the helicopter to the edge of the tepui and we saw with our own eyes how the river turned into a vertical stream of a kilometre high, so exciting! We flew along the canyon to see several other waterfalls, which are not so high, but not the less impressive. Time flew fast and we had to return to the airport. In the end, our pilot showed us one more interesting landmark called "Manhattan": curious stone towers atop the mountain formed by weathering and erosion.

The following day we had to repeat our way to the waterfall, but this time by river. The best water transport used here is the wooden canoe made of a solid tree trunk. This kind of boats is highly resistant to stones hidden by water and are suitable for overcoming numerous rapids. We loaded our equipment and started floating up the river. The way was a long one, so we would arrive at the camp only in the evening. The boatman skilfully controlled the canoe sailing among stony banks; lianas were hanging over the water and we could see the tepuis. The weather was hot, the sun was shining brightly. As soon as we reached our destination we encamped for our first night in the jungle, hung the hammocks and an anti-mosquito screen. We would stay here, in this jungle forest, for several days. 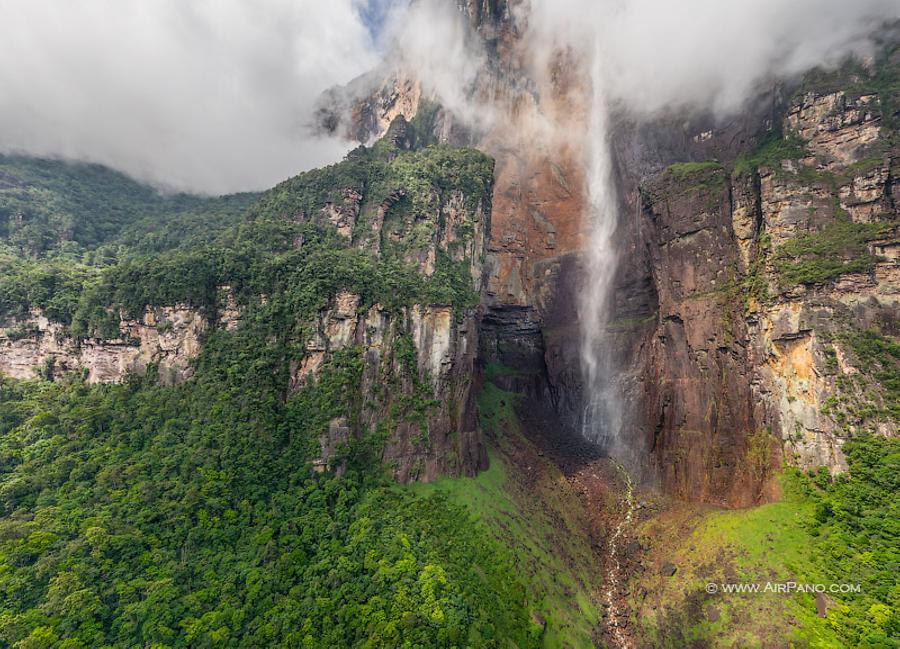 The distance between our camp and the waterfall was about four kilometres only, though the way laid through the humid jungles with a certain elevation. So, when we got the place where we would launch our drone we felt quite exhausted, meanwhile our guides walked easily, as if nothing special was happening.

Standing just opposite the waterfall it became clear to us how huge it actually is; we couldn't see the true dimensions of it from above. The water falling from the height of almost a kilometre is turning into the smallest dust when it gets to the ground. The top of the tepui gets covered by clouds every now and then. Sometimes the clouds descend and cover the jungles with the mist.

Our work lasted for several days: the daytime we spent capturing Angel Falls, then in the evening we returned to the camp and in the morning again went to have a "date" with the waterfall. With the nightfall, we could witness the thousands of stars in the sky and as soon as we were turning on the torch we were surrounded by lots of exotic insects attracted by the light. Some of them bit us, so I preferred to stay in the darkness and watch the starry sky. 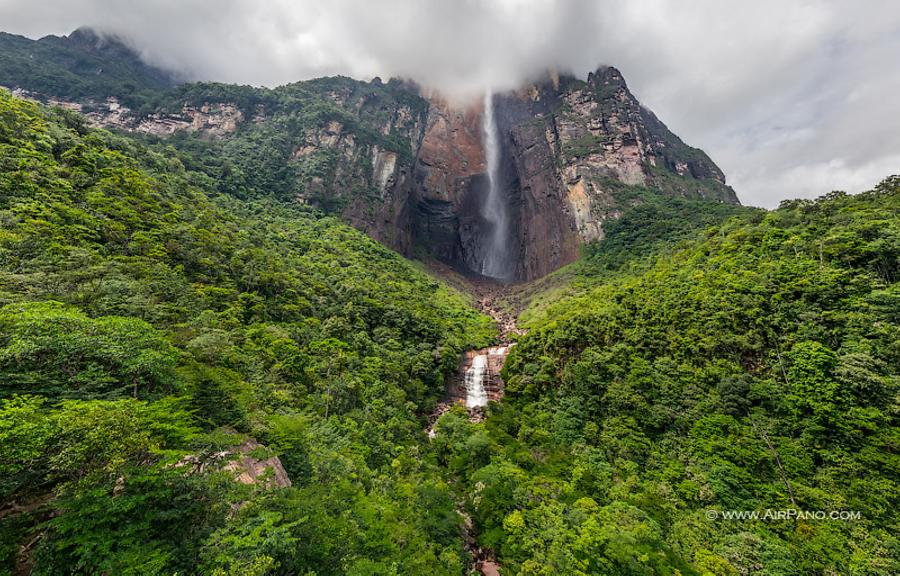 Local indigenous people Pemon believe the tepuis to be the home for the spirits called mawari, while the waterfalls are incarnations of these spirits. The mountain Auyan-tepui is known among them as the "Devil's Mountain", although they also believe that the person who saw the Angel Waterfall even once in a lifetime would receive vital power. The mysterious mawari are the creatures of small height wearing golden jewellery, just as ancient Inca people, and they don't like meeting new people. The Pemon usually leave some food for them in the night and they say that by morning it disappears. It can be just a legend, but who knows? The jungles are huge and mysterious.

Several days later the weather got worse and we had to go back. The way down the river turned out to be more challenging; in addition, the rain started. At first, we felt a relief after a long period of hot weather, but soon we got soaked to the skin. With their teeth chattering, the Indians were wrapping in life jackets and polyethylene. It was already dusk when we returned to the lagoon. The following morning a flight to Puerto Ordaz was waiting for us, from where we were to travel to the Orinoco Delta.

But that's another story to be told.