, members of the AirPano Team that is a member of the global-geography Consortium.

The Goose Necks are on the San Juan River. The photos of that place can be found in any geology textbook. Speaking scientific language, these intricate curves of the river, which were formed in the beginning of the Miocene (about 25 million years ago), are named the Meanders. And one more cult place is seen on the back side, it is Monument Valley.

I had visited the Goose Necks by helicopter twice. For the first time, my comrade, Mike Reifman, and I realized a reconnaissance, we wanted to understand the situation. Unfortunately, there was no a cloud in the sky and it was an absolutely bad time for a scenic shooting. That is why I stopped in shooting only a spherical panorama which is able to be viewed now. The photo-shooting was planned by us next morning, as the weather forecast promised the beautiful clouds in the sky. 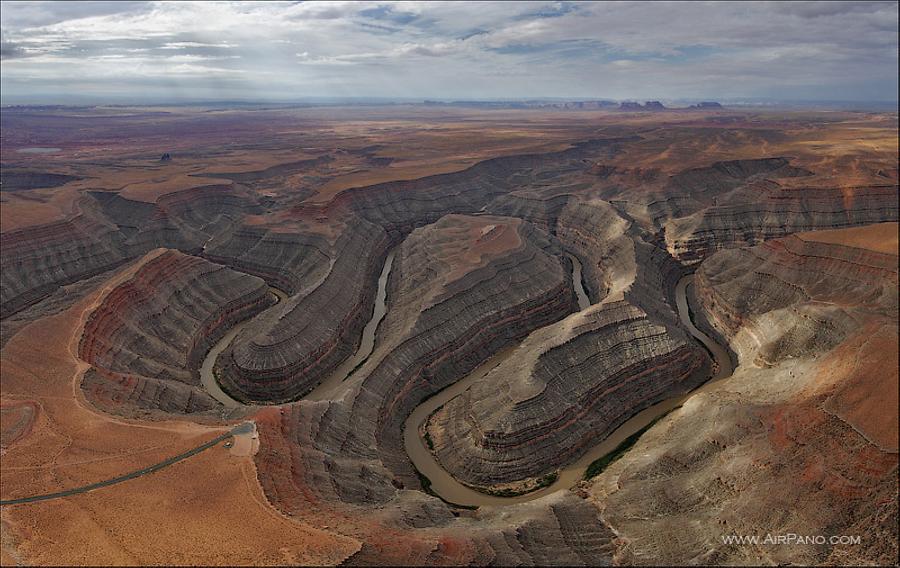 So, next morning, in the sunrise Mike and I were standing at a helipad. There was no sun. The place, where it should have risen, was covered by the heavy leaden clouds. A helicopter with an unmoved engine stood near us. It flew from hundred miles from there and a pilot, her name is Maria, fiddled with a paper nervously. Finally, in the sunrises dusk and oppressive silence we took the decision to fly up but were looking sadly at the horizon.

At that time it began to rain. We flew in the rain for about half an hour. The side doors were taken off for more convenient photo-shooting and the rain drops fell inside without any obstacles. It was cold and wet, and I was hiding the camera under the jacket and was sorry that I had taken that helicopter. I was trying to cover the second camera by a hand but it hardly helped.

And suddenly the spell of rain finished. Under us, in the bottom of 300-meters canyon, the river San Juan fancifully curved. Our helicopter began to fly round the Goose Necks and suddenly, when the third approach, the sun struggled through the rainy clouds and shone the canyon with stains. We banged away the shutters and in a minute the sun was disappeared again as unexpected as it had appeared before. However, we had already made our frames for that time the Navajo Gods allowed us.