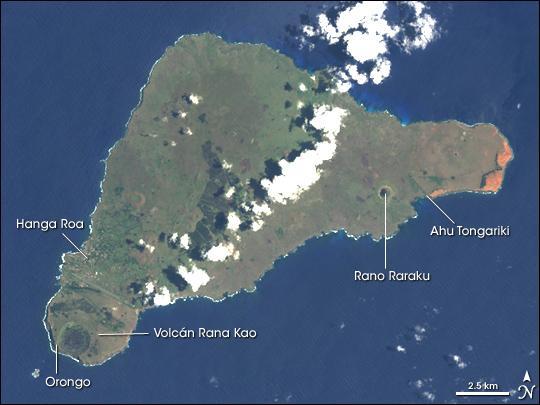 Landsat image courtesy of NASA., under PD
Discovered by Dutch sailors on Easter Sunday 1722 and named for the holy day, the isolated Pacific island had already been inhabited for more than one thousand years, most likely settled by Polynesian sailors in canoes between A.D. 400 and 700.

The most amazing cultural artifacts on display were giant stone statues, called moai, resting on ahu, raised platforms of expertly fitted stones. Most of the hundreds of moai on the island were carved out of volcanic rock in the crater of Rano Raraku, located in the southeastern part of the island.

In addition to the many moai scattered around the coast of the island, Rano Raraku is littered with moai, some only half-carved, others that appear to have broken in the attempt to remove them from the quarry, and still others that seem to simply have been abandoned. East of Rano Raraku is Ahu Tongariki, where in 1960 a tidal wave caused by an earthquake in Chile struck the southern coastline and swept 15 moai inland for several hundred feet.

In 1992, the site was restored by a Chilean archeologist. On the western end of the island is the only town, Hanga Roa, where most of Rapa Nuis 2,000 residents live. South of the town is the islands largest volcanic crater, Rana Kao. Along the crater rim looking southward over the coast, lie the ruins of Orongo, a ceremonial site containing elaborate stone carvings and other artwork.