Morraine lake is located in one of the most spectacular areas of the Canadian Rockies, yet is often overlooked because of the more famous Lake Louise nearby. 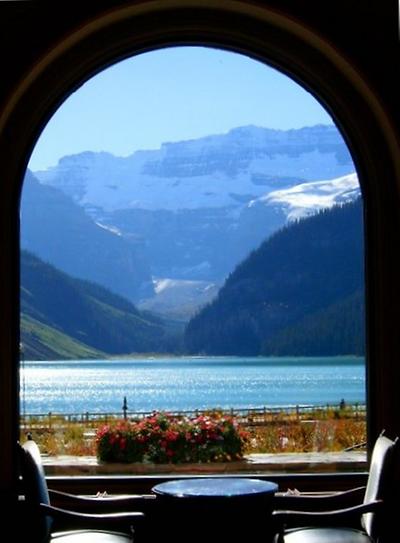 Looking out of Lake Chateau.
Photo: Glenlarson. From: Wikicommons, under CC BY-SA 3.0
Lake Louise Lake Louise, Alerta is really a small village along the Transcanada Highway famous for its skiing area on the West side and the famous Chateau Lake Louise, a 100 year old splendid hotel (a model for the slightly later built Banff Springs Hotel), facing the Lake and glaciers behind it. The picture on the left shows the beauty of the place, yet does not show that a bit below the hotel there is one of the most crowded car-parks anywhere in the mountains. In summer you are competing with thousands of visitors on the way to the lakeside hotel (now also open in winter) or along the shore of the lake. If you have time to spare and you don't mind crowds, do go there. Otherwise, visit Morraine lake area instead:

In both cases, when you drive West from Calgary you continue past Banff almost to the place where the famous Banff-Japser Iceway turns off from the Transcanada highway. A few kilometers before this turn off, you turn to the left, pass through the village and drive towards the Chateau on the lake. However, before you reach it, you turn left again onto Morraine lake road. Even the short 10 km drive to the Morraine Lake parking area is spectacular: to the right you get glimpses of glaciated Mt. Temple (3.540 m high, yet a surprisingly easy peak to get up to!), to the left you look down into the valley that drains Morraine Lake. Quite often you can see moose down there.

The parking lot at Morraine lake is also large and busy, but no comparison to the one mentioned earlier, and Morrain Lake Lodge (although not the cosy lodge it was 40 years ago) is still ok for a snack, and even overnight stays are still "affordable" (and necessary if you intend to ascend Mt. Temple). The view when you get to the lake is as you can see in the movie below quite spectacular: The mountains on the left are framing the "Valley of the 10 peaks". The trail on the right side of the lake to the end of it will be quite busy, but there are two alternatives that are more interesting.

One is turning up behind the lodge on the well-marked trail to Larch valley. The name says it all: after slowly gaining height, in less than two hours you reach a valley dotted by small lakes/ponds and larch trees: early fall, when the larches have turned yellow the combination of the water, the trees, the glaciated peaks and the blue sky (a good chance to have a blue sky is in early September) is quite out of the world. (Hwoever, Morraine lake road tends to close end of September, so make sure you phone for information!) At this point hikers turn back.

Serious mountaineers can continue to the peak of Mt. Temple folowing a poor trail with some parts where you need your hands, but then you have better started early morning from the Lodge. Another alternative is to climb Sentinel Pass (easy), but the continuation that eventually leads you to Lake Louise is long and not trivial.

A more modest hike, and not requiring to go high up, is to take, from the Lodge, the trail over the boulders at the outflow of the lake (this is the spot where the movie was taken) and go to Consolation Lakes. This is an easy and nice trail leading through forest and ending at the Consolation Lakes with beautiful views. You won't be on your own, but crowds are bearable. For serious hikers, the trail continues over a pass eventually meeting the Banff-Radium highway: But this is a trip for a full day and you need a second car or such to get back to Morraine lake.

You are dissappointed by the crowds even at Morraine lake? Well, you better book into Lake O'Hara Lodge in a beautiful valley with lakes and waterfalls, just a bit further on the Transcanada, but only allowing a limited number of visitors per day. And, unless you want to hike 11 km both ways on a forestry road, you better book on the bus to take you in.

Now enjoy the short clip of the lake and the ten peaks at its Southern shore!