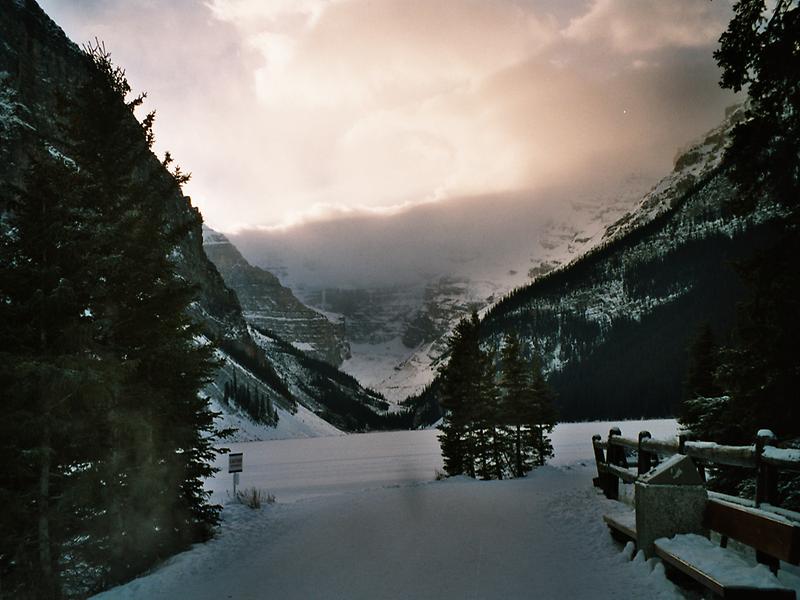 The Fairmont Chateau Lake Louise Hotel is on the eastern shore of Lake Louise from where this pictures was taken. The original Chateau was built at the end of the 19th and the beginning of the 20th century by the Canadian Pacific Railway and is similar to the the Banff Springs Hotel. The Painter Wing, built in 1913, is the oldest portion of the hotel that is still standing. Originally built only for use in summer, the hotel was winterized in 1982.

On sunny days in summer the view of the emerald green mountain lake fed by melting water from Vitcoria Galcier is spectacular.

The main negative point is the tremendous number of tourists milling around. That the parking lots have room for 2.000 cars says it all.

You will never forget the scenery, particularly when you have the luck to walk from Morraine Lake up to larch valley on a sunny September day, when the larch trees are turning yellow: The view of the sparkling lake, the ten impressive peaks against a blue sky, with the golden trees as foreground, and impressive Mt. Temple (3.543 m) behind, is not easy to beat anywhere in the world. The next picture shows Morraine lake from the lower end, where a trail to beautiful Consolation Lakes starts.