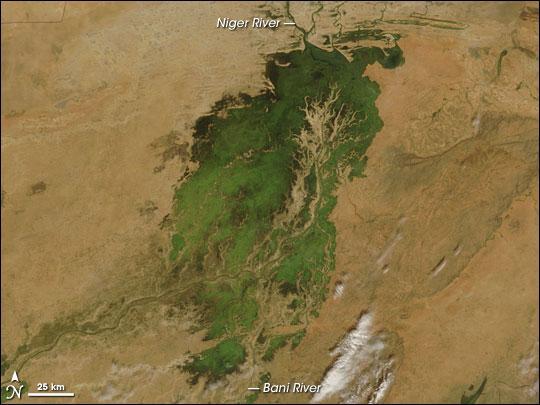 Image courtesy of NASA., under PD
In the middle of Mali, part of the landscape gleams like a giant emerald in the otherwise arid brown African Sahel. The gleaming jewel is the Inland Niger Delta.

Fed by floodwaters from the Niger River, the Bani River, and a network of smaller streams, this inland delta grows to some 20,000 sq km (7,700 sq mi) during the four-month rainy season that begins each July. During the dry season, the inland delta can shrink to roughly 3,900 sq km (1,500 sq mi).

This satellite picture of the Inland Niger Delta was taken shortly after the end of the rainy season when the landscape remained lush and green. This inland delta is a complex combination of river channels, lakes, swamps, and occasional areas of higher elevation. One such elevated area is obvious in this image, and it forms a branching shape, like a tan tree pushing up toward the north.

This wet oasis in the African Sahel provides habitat both for migrating birds and West African manatees. The fertile floodplains also provide much needed resources for the local people, who use the area for fishing, grazing livestock, and cultivating rice.