We spent almost 24 hours on the road: Moscow — Berlin — Reykjavik... And, now we are flying northwest over the sea on a small propeller airplane. We hear our captain's voice: "Look, there is land down there. We are approaching the east coast of Greenland". Snowy mountaintops and glaciers with broken off icebergs are appearing in our window. We are in the Arctic. After another hour of flying over the ice sheet we land at the Ilulissat airport. We have arrived. Due to the weather conditions, our plane was seriously delayed. It is evening. While we are heading to the hotel, the ocean fog covers the town. 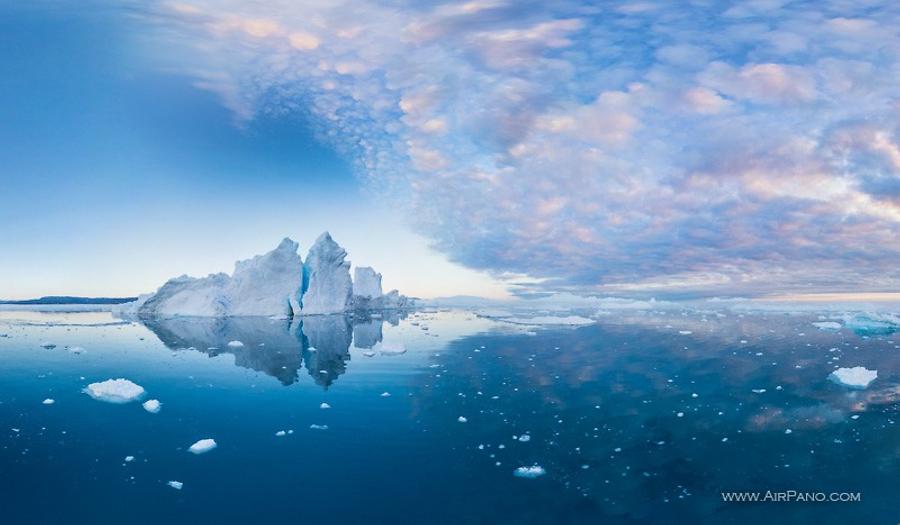 My first impression of Greenland is that it is very quiet and still. It was very unusual; even the wind doesn't blow. The fog amplifies the feeling of stillness even more. The loudest sound is the sound of my footsteps and the clicks of my camera shutter. From time to time I hear low voices: there are people passing by a hundred meters away. And from time to time I see a car driving by, and then again, silence, with the occasional cries of birds and quiet murmur of the waves. This is the way Greenland welcomes us...

Ilulissat means "icebergs" in the Inuit language. It is true; there are a lot of icebergs around here. The town is situated on a rock plateau with a huge glacier located just a couple of kilometers away. Breaking off the glacier, huge pieces of ice float away to the sea. There are two main attractions that bring tourists from around the world to this town: icebergs and whales. 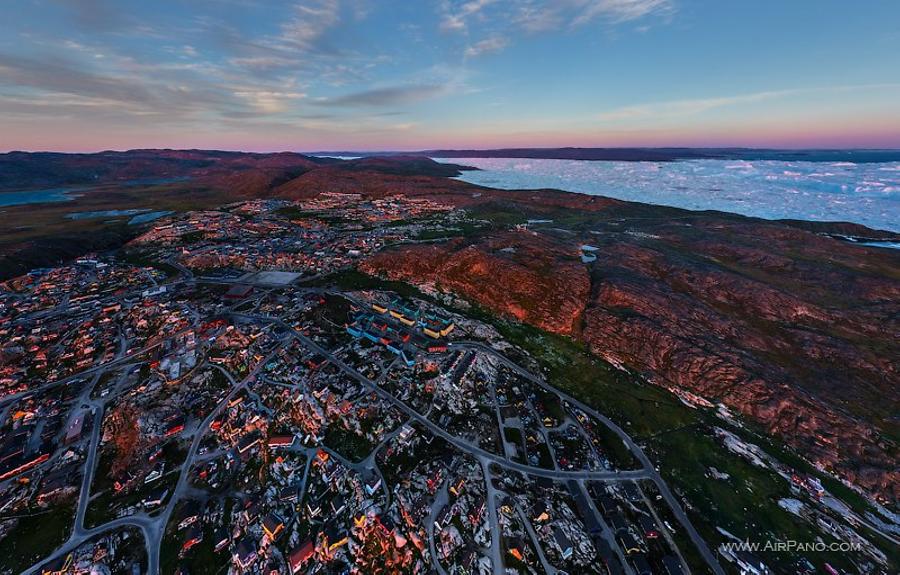 Above the Ilulissat town

And so we too go searching for whales. We are in the boat and our captain confidently maneuvers between the icebergs. After some time we see a fountain in the horizon. Hooray, it is a whale! And there is not one, but two of them. Slowing down, we approach them on low gear and start the engine of our hexacopter. Stas, our pilot, operates it, trying to photograph the whales from the air. I navigate him by looking through my telephoto lens as if it were a binocular. It is a challenge to chase whales in the sea, but we are very determined. The whales seem to understand that and start posing for our cameras: they wave their fins and tails at us. Wait! Has it already been 4 hours? Yes, time passes by unnoticed by us. It's getting dark and it is time to go back.

Although polar days are long, the best time for photography is at sunrise and sunset. In August the sun comes up at 4 AM. It was not easy to find someone able to take us out to the sea before dawn. "So early? You must be crazy!" was a typical response. However, after a while, we finally found a captain who was willing to take us aboard at this hour. 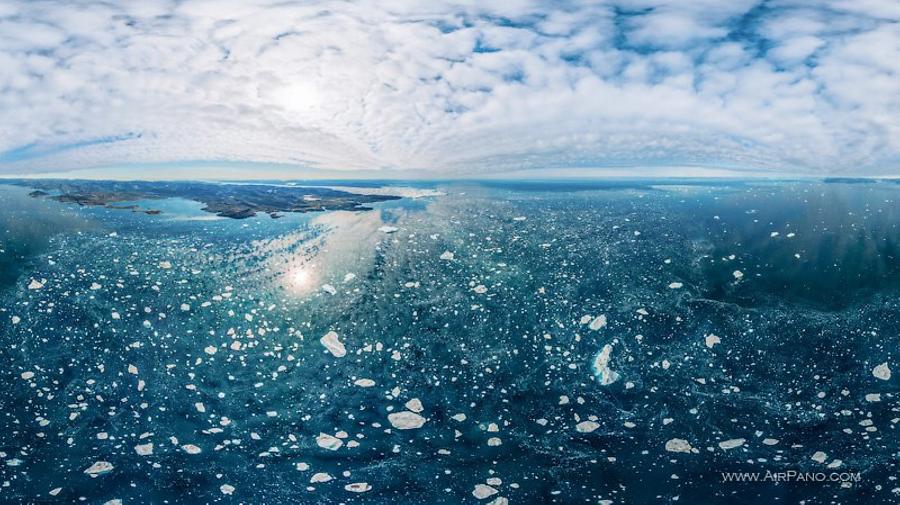 His red wooden boat has been at sea for over half a century. Without rush, we are going towards icebergs in the dusk. It smells of coffee and fuel in the captain's warm cabin, but once you step outside, the cold wind tries to get under your collar. Ice floes float by. Soon the low, red sun rises above the horizon. We do our first flight, sending the copter directly towards the icebergs, which are impossible to reach by boat due to safety reasons. Icebergs shine with a blazing blue color, and above them the low northern sky burns with scarlet hues... There were no signs of trouble.

However, our following flight attempt ended with the sinking of the copter... Bidding us goodbye with a "dead loop," the machine fell into the ocean. The depth is 200 meters here. We didn't say a word on our way back to the port. To break the silence, the captain told us a story. 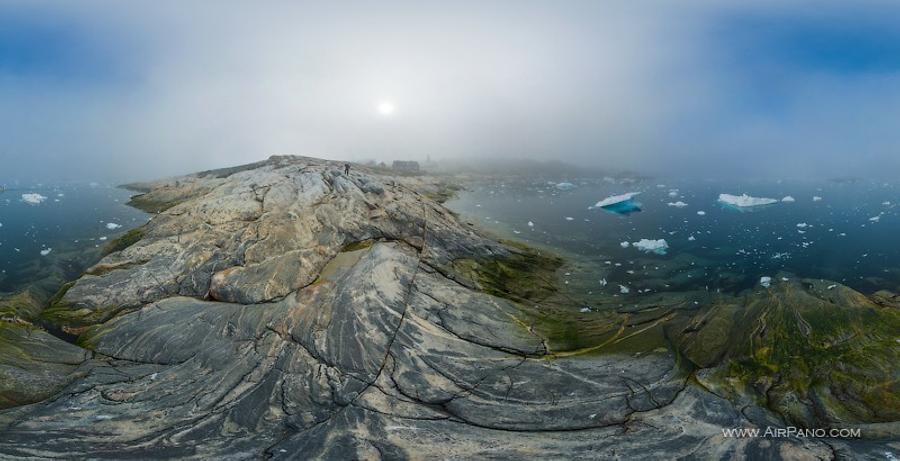 On the shore of Ilulissat

A helicopter with a German film crew crashed at this very spot a few years ago. The cameraman accidentally blocked the collective lever with his foot, and the helicopter could not get out of the dive. It fell into the water and broke into pieces. They rescued the pilot, but the helicopter sank, and cameraman's body was not recovered. Our captain was a witness to the accident. "Perhaps," the captain said, "he needed your cameras."

Although the loss of our copter at the very beginning of our trip was upsetting, we had to continue our work. Our next task was to fly to the glacier on a helicopter. As this was a protected area, the only way to shoot it was from the air.

We are on our way to meet the pilot. After discussing the flight plan, we schedule our take-off in the evening so that we can catch the sunset. Here we are: the land goes down, and we begin our flight to the glacier. The first impression is a bit disappointing: a white snowy-icy mass stretches for many kilometers below us. But we keep on flying. I see the glacier sliding down to the water; heavy multi-ton pieces of ice break off of the glacier and become icebergs. The ice sheet is armed with ice spears sparkling in the sun. The ice shines with all kinds of colors: everything from emerald green to black. I open the door and photograph this beautiful scene. We fly along the glacier wall with the amazing ice rocks a few times.

One more boat trip is scheduled for the following day. Unfortunately, the boat we used earlier broke down, but Stas manages to find another one in the port. It is a real fishing boat that smells of fish scales and engine oil. It speeds up, taking us away and forward. Just recently a lot of ice broke off the glacier, filling up the bay with icebergs of all shapes and sizes. Our captain is very excited; he bravely sends the boat into the midst of the icebergs. The ice creaks and sighs; we keep on speeding forward... It is a real challenge to shoot panoramas in the sea: multiple currents toss and turn the light boat in every direction. I try to hurry up and shoot faster because the sun is almost down: it's midnight. 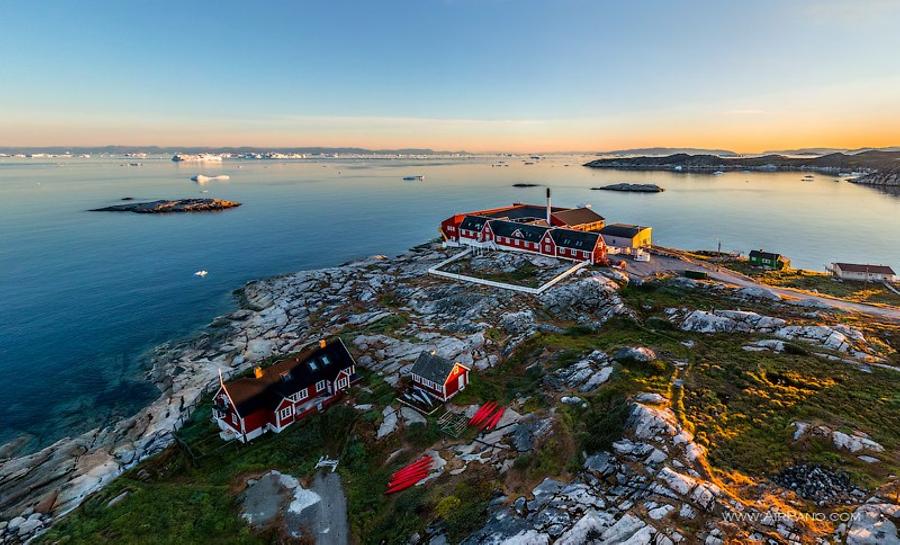 Having studied the Ilulissat glacier from both the air and water, the next day we decide to hike there through the tundra area that is protected by UNESCO. We have to walk on special wooden platforms. On our way we pass "a dog village" where there are a several dozen doghouses with sled dogs on the outskirts of the town. Sled dogs don't work during the summer, so they spend their time resting in the sun. Most of the time they sleep, but occasionally they gather for a "dog choir" and howl in unison. For example, a church bell inspires their vocal talents, and the voices of hundreds of dogs soar in the sky above the tundra. A few kilometers down the road, endless ice fields appear before our eyes. This is where the border of the glacier lies. From time to time we hear echoing thunder: an iceberg has broken off somewhere. We descend the granite rocks down to the huge white icebergs. I cannot resist and break off a little piece of the ancient ice to taste.

The amazing Arctic nature, slow-pace life of the local people near the edge of the ocean, midnight sun, and smell of tundra will linger in my memory for a long time. We will try to show you a fraction of these memories though our photographs. 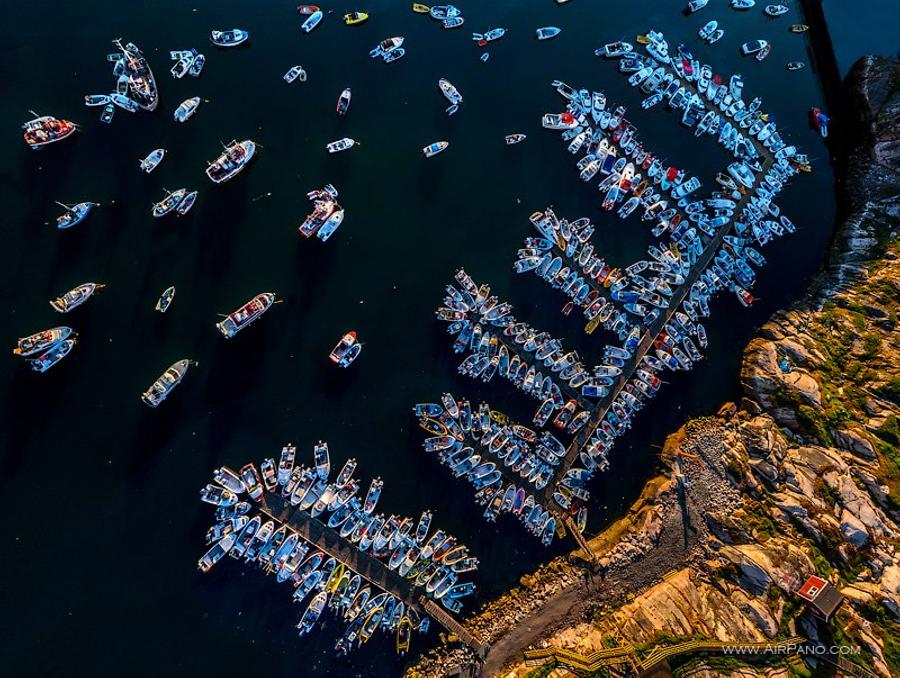 Here are a few facts about Greenland.

Greenland is the world's largest non-continental island with a territory of 2,130,800 square kilometers. The shores are carved by deep long fjords, reaching the edge of the ice sheet. The glaciation of Greenland's territory began during the anthropogenic period (a geological period that started 2,588 million years ago). Today the ice sheet covers 1,834,000 square kilometers of the island, creating the unique Greenland scenery. 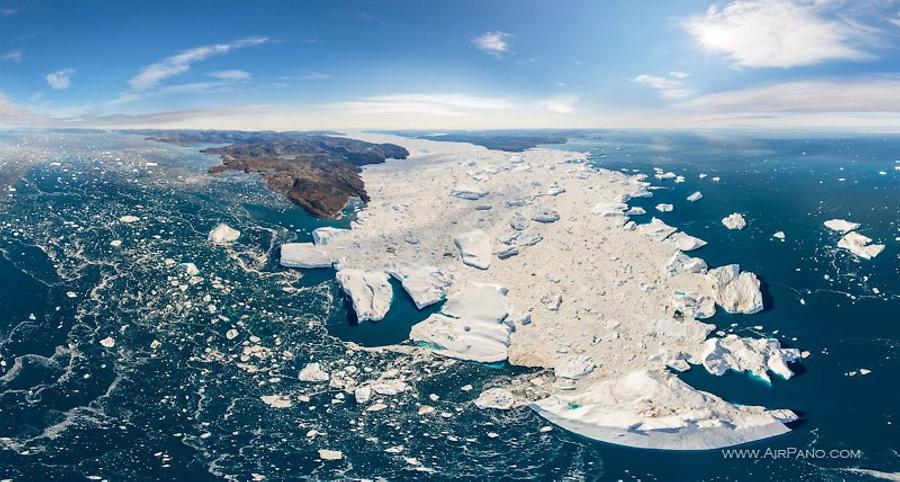 The town of Ilulissat is located in the western part of the island. As Greenland is an administrative unit within the Kingdom of Denmark, the town has a Dutch name as well — Jakobshavn.

Tourists come here to see the Ilulissat Icefjord filled with icebergs. It is 40 kilometers long and 5 kilometers wide; the thickness of the ice in its lower part is 150 meters. Since 2004 Ilulissat Icefjord has been a UNESCO World Heritage Site. Besides picturesque icebergs, Ilulissat is also known as the birthplace of the famous polar explorer and anthropologist Knud Rasmussen. There is also a unique "Museum of Cold". In other words, there is plenty to see in Ilulissat, so we invite you to get acquainted with this amazing little corner of Greenland!

21 Panoramas of Icebergs of Greenland