Ranking traditional icons of Switzerland by their increasing size may look like this: Swiss watch, Swiss knife, Swiss chocolate, Swiss cheese, and Swiss bank. The largest icon of Switzerland — the Matterhorn Mountain — caps the list.

We took pictures of the Matterhorn in 2010 when skiing with Dima Moiseyenko in Zermatt. We had to fly to the mountain twice.

The first day we flew up very close to it, right to the base, and took some standard landscape panoramas. While stitching the images that night we realized that huge 4478-meter tall Matterhorn looked like a small hill on our panoramas. And from a helicopter we saw an enormous giant hovering over us. An amazing optical effect due, perhaps, to the challenge of trying to fit the whole world on a small screen.

So we had to fly again the next day. This time our helicopter blades were almost touching the mountain slope, which seemed to be taking all the space around us. The wind at the slope was very strong: about 70 km per hour. Our pilot, with great difficulty and quite reluctantly, held the helicopter close to the mountain for several minutes, and then said: "That's it. It's not safe here. I am leaving". And so he left. We hardly had time to finish shooting. 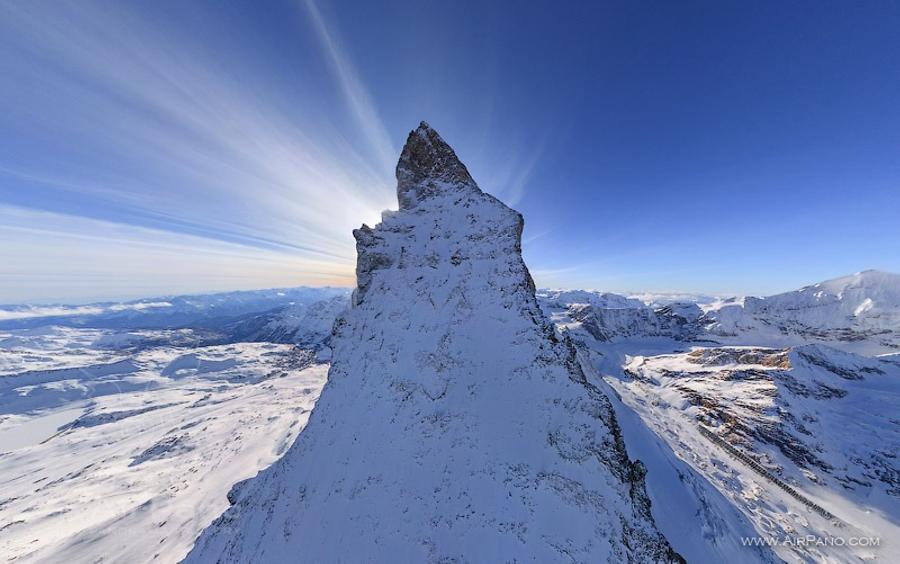 Speaking of the Matterhorn, I made another personal discovery.

Upon my return to Moscow, I was going over panoramic shots taken close by the mountain, and noticed a small hut snuggling on the Swiss-side ledge of the Matterhorn. I looked it up on Google Maps — it was called Solvay Hut. This refuge was built in 1915 at 4003-meter altitude. It can fit about 10 people in case of emergency during summiting the mountain. Another Google search revealed an image of the second hut (Rifugio Carrel) on the Italian side. After that I was actually able to find it on our panorama taken from the western side of the mountain.

By the way, Italians have a different name for the Matterhorn — Monte Cervino.

Situated on the border of Switzerland and Italy, the Matterhorn is like a pyramid in the center of Europe, with four triangular faces meeting at its summit. Like any other pyramid (whether it be the famous pyramids in Egypt or a bit less famous pyramidal structures in Mexico), the Matterhorn Mountain is also full of mysteries and tragic stories.

In terms of altitude, the Matterhorn is the fifth among the Alpine peaks, but the difficulty of a climb ranks it second to none. Its faces are so deceptive, that even the most experienced climbers could not ascend them until 1865; and the southern slope remained unconquered for another 66 years. 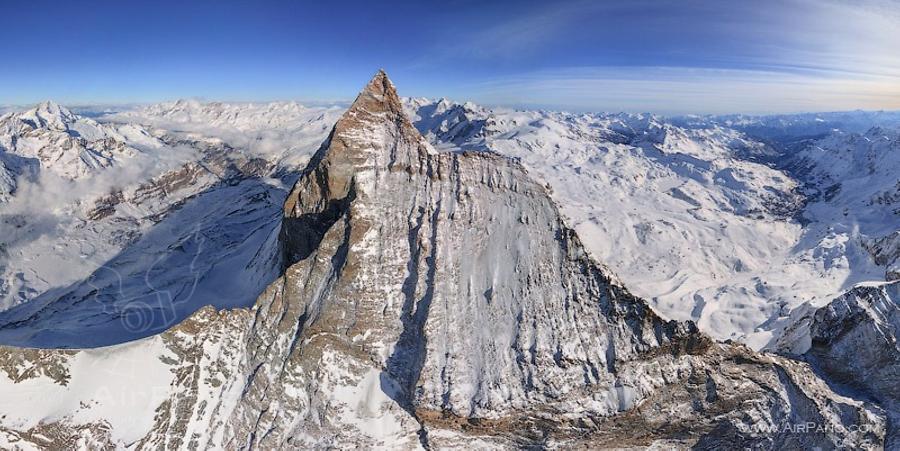 Time after time results of those ascents were rather ambiguous. For example, Edward Whymper (British) and his fellow climbers made the very first successful ascent of the mountain. And as they began their descent, rope broke and killed four of the brave pioneers. It's interesting that the two mountain guides Peter Taugwalder father and son, who survived this accident and the first ascent, were the great-great and great-great-great grandfathers of our colleague Matthias Taugwalder who provided couple of panoramas for this tour.

In 1933, three French climbers were first to finish one of the Matterhorn routes, but they all died on the way back.

Hermann Perren, a mountaineer and a guide, became famous thanks to the Matterhorn too. His goal was to ascend the mountain 150 times, but he fell and died 10 ascents short of his goal.

Although all of the Matterhorn ridges and slopes have been climbed by now, and guides take large tourist groups to the peak (which makes some of the routes really crowded) — still about 10 to 15 people die climbing the Matterhorn every year.

The Matterhorn has its character. At least, that's what the residents of the nearby town of Zermatt are sure of. They say that even the weather in Switzerland, in this part of the country, depends on the mood of the legendary mountain. When the sky is gloomy and the 4478-meter tall Matterhorn peak is hidden behind the clouds: the mountain is out of humor. When the Matterhorn wants to play a joke, it pretends to be Vesuvius: clouds are covering up only part of the mountain making you believe the peak is smoking, as if before eruption. But when "his highness" is in a good mood: it is showing off, gleaming with its glacier hat, as if inviting you to take an unforgettable picture of the Matterhorn.

The town of Zermatt (situated at 1600 meters altitude) enjoys the proximity of such a popular neighbor. Not only is it one of the most popular ski resorts in Switzerland. It is, in fact, the tourist landmark of Switzerland. It offers activities all year round. Even summer activities, as one can guess, are related to vacationing in the mountains. Zermatt even has a so-called sunrise train, which takes you to the Matterhorn peak to witness the sunrise of unparalleled beauty.

The bordering country benefits from the mountain pretty much in the same way. The southern slope of the Matterhorn is home to a small town called Brueil Cervinia, an extremely popular ski resort in Italy located at 2006 meters above sea level. It does not need to compete with Zermatt. They simply have to accept the fact that they share the mountain. That is why both resorts have shared ski routes, tourist routes, and a great number of tourists coming here for an active outdoor time and ski tourism in the Alps.

...There is a saying: everyone, who sees the Matterhorn mountain, will be successful and wealthy. Perhaps, this is the reason why Swiss banks have so much money in their vaults. Come visit the Matterhorn, the famous landmark of the nature of Switzerland, and who knows, the local saying may just come true for you.