The ancient city of Lucerne can proudly represent all the stereotypes about Switzerland. On the one hand, it lies on the rocky bank of a beautiful lake, and at the same time it has settled at the foot of the Alps, so that many majestic and snowy peaks with picturesque slopes can be seen from practically any point of the city. Cosy streets — the other famous feature of Switzerland — reveal a lot of neat decorated houses and ancient cathedrals.

The name of the city means "illuminating" and stems from a legend. People have been inhabiting these lands since the times of the Roman Empire, but the information about settlements of that time is rather scarce. According to a local legend, one night an angel came to the first settlers. With a lantern in his hands, he descended and showed them where to build a chapel. Later this church became the centre of the present-day city. This event is considered to have happened in the 8th century, but probably, this date can be just the time of the foundation of the first chapel near Lake Lucerne (Vierwaldstättersee). 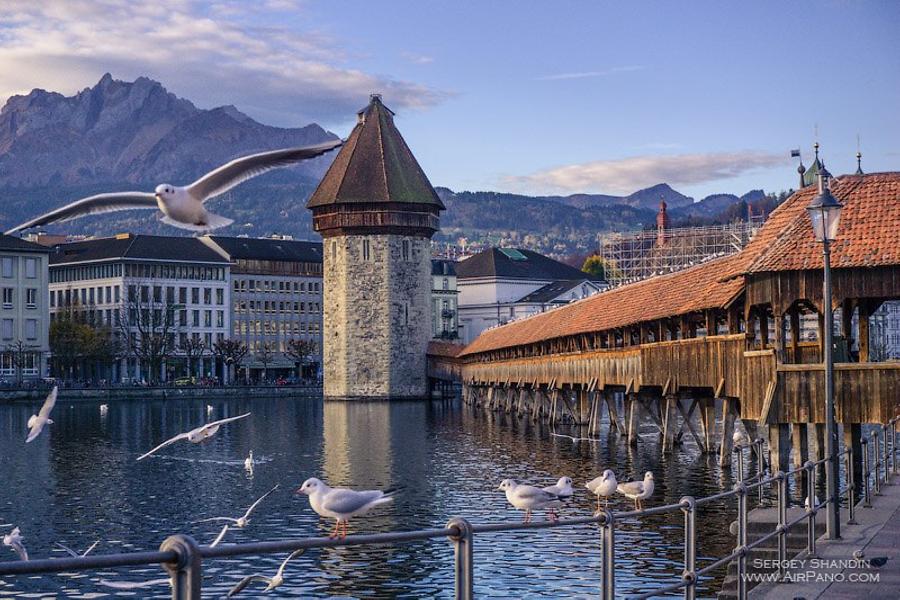 Seagulls near the Kapellbrücke Bridge

The earliest mention of Lucerne in the chronicles is dated year 840, at that time the cathedral had already become a part of the Monastery of St. Leodegar im Hof. A very import event that influenced the development of the city took place in 1220: it was the inauguration of the Gotthard Pass — one of the most important passes in the Swiss Alps. Approximately at the same time the fortified urban wall and several towers attached to it were built.

In the 14th century Lucerne, along with the three other forest cantons (Uri, Schwyz and Unterwalden), formed the Swiss Confederacy, which became a kind of a city-state. Only by the middle of the 19th century Lucerne had lost its influence in the political sphere. However, later it became one of the major Swiss cultural centres due to the development of tourism. 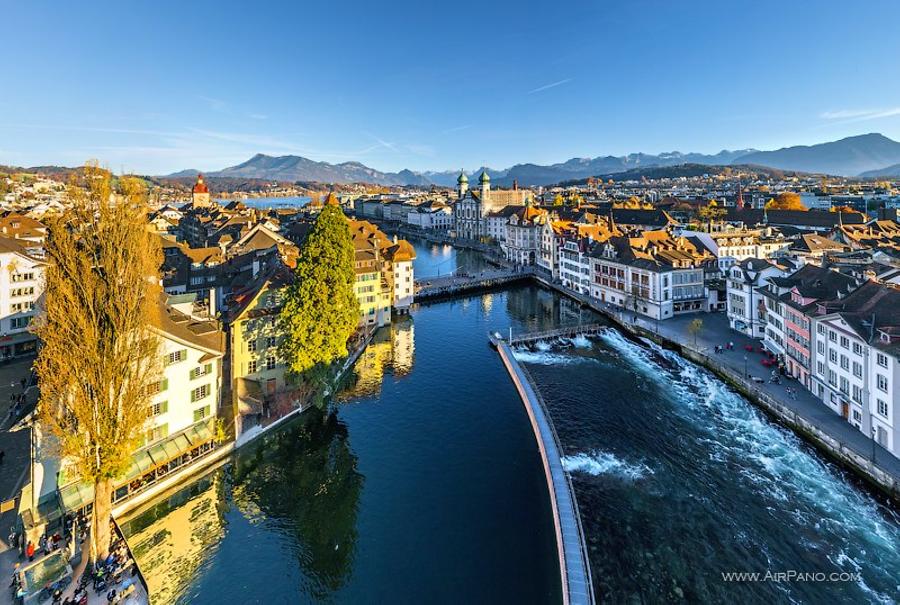 The acquaintance with the sights of the city usually begins with the oldest functioning wooden bridge in Europe — the 204-meter long Kapellbrücke Bridge originally built in 1333. It was created as a part of the urban fortifying construction on the Reuss river, and now it is the major symbol of Lucerne. The bridge runs through the 34-meter tall octagonal Wasserturm Tower standing in the middle of the river. In the 13th century this tower was a beacon, that later became a prison, then a treasury, and nowadays it functions as a meeting house. Unfortunately, in 1993 the bridge was seriously damaged by the fire, but later it was carefully restored. 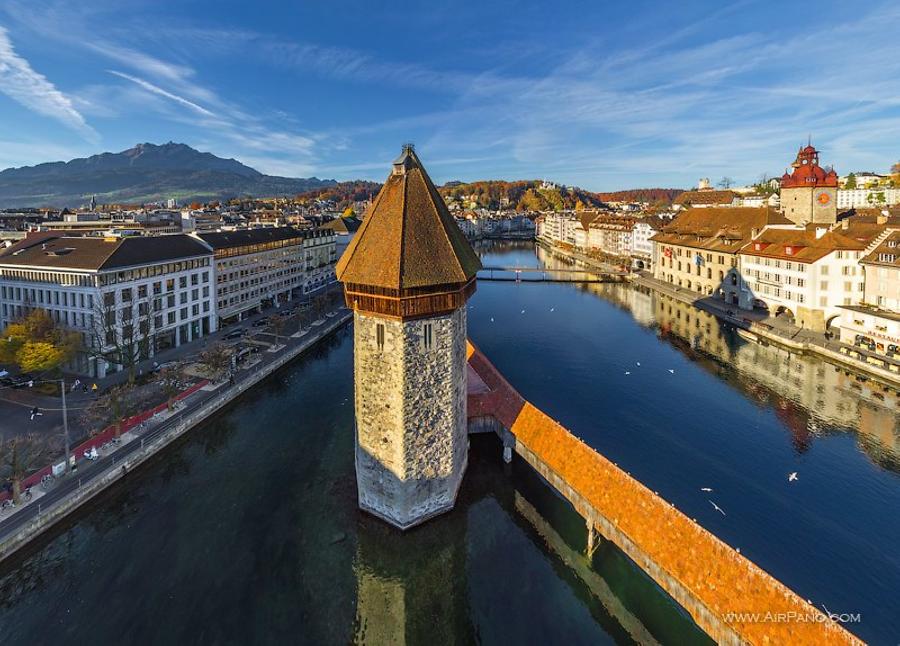 The quarters of the Old Town are located on both banks of the Reuss river. In the southern part of the city they form a triangular area called Kleinstadt. Long ago this area was entirely situated within the fortifying walls and served as an outpost of Lucerne. The most interesting sights of this part of the city are the church complex of Jesuitenkirche, considered to be the first Baroque church in Switzerland, and the Ritterscher Palace built in 1557 in the Florentine Renaissance style. 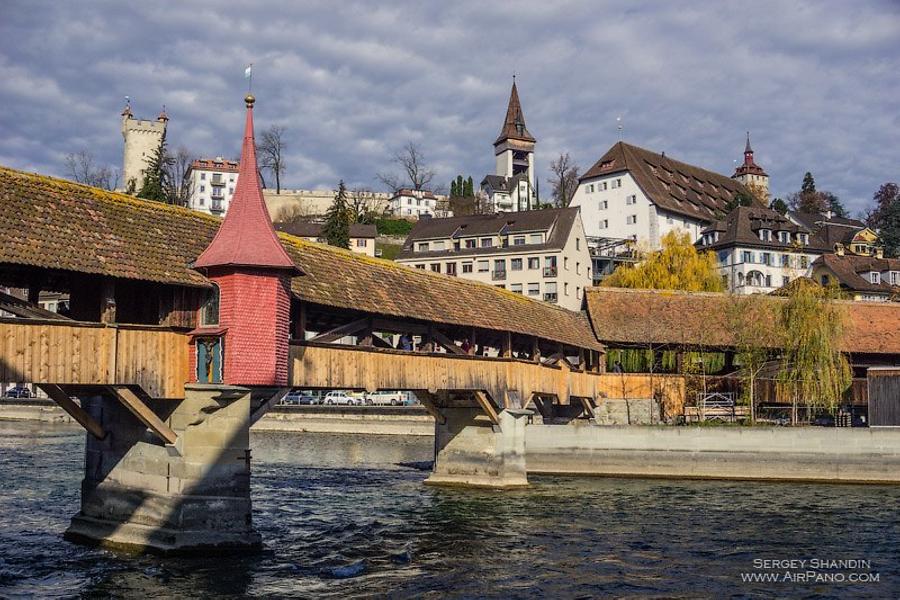 The other part of the Old Town, located on the northern bank of the river, is not of the less interest and it has preserved the atmosphere of the ancient times. Here you can find a tiny St. Peterskapelle (St. Peter's Chapel) built in the 18th century on the place of its predecessor — a church dated 1178. Not far from this place lie the city hall and the former medieval public market Kornmarkt. The square of Weinmarkt was the place where different religious ceremonies were held in the later Middle Ages.

Along with the architectural monuments of Lucerne, there is one more masterpiece included in the list of the world's greatest sculptures. It is the Dying Lion (Das Löwendenkmal) — a monument carved in rock in memory of the Swiss guards who were massacred in 1792 while storming the Tuileries Palace in Paris. Mark Twain spoke of this sculpture as of "the most mournful and moving piece of stone in the world". 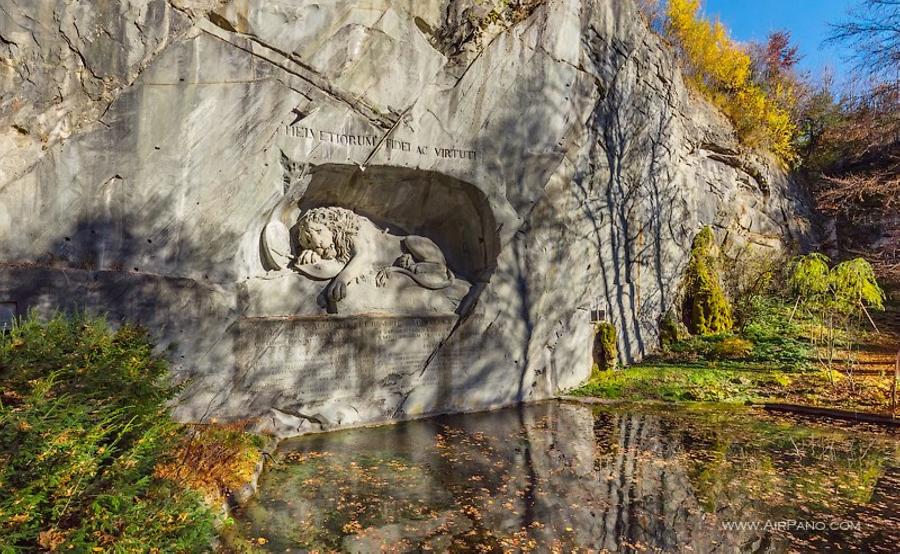 But a walk down the streets of Lucerne will not leave you sad or lost at all. We hope that our virtual tour will share beauty, harmony, purity and tranquillity of this beautiful city.

View from the Mount Pilatus