Surprisingly enough, the capital of Switzerland is not the largest city of this country. Bern, with the population of around 138,000 people, is only the fifth biggest Swiss city after Lausanne, Basel, Geneva and Zürich. But this small cozy settlement is full of rather ancient sights listed as UNESCO World Heritage Sites. In 2014 Bern was declared the most beautiful city of the country by the citizens themselves. 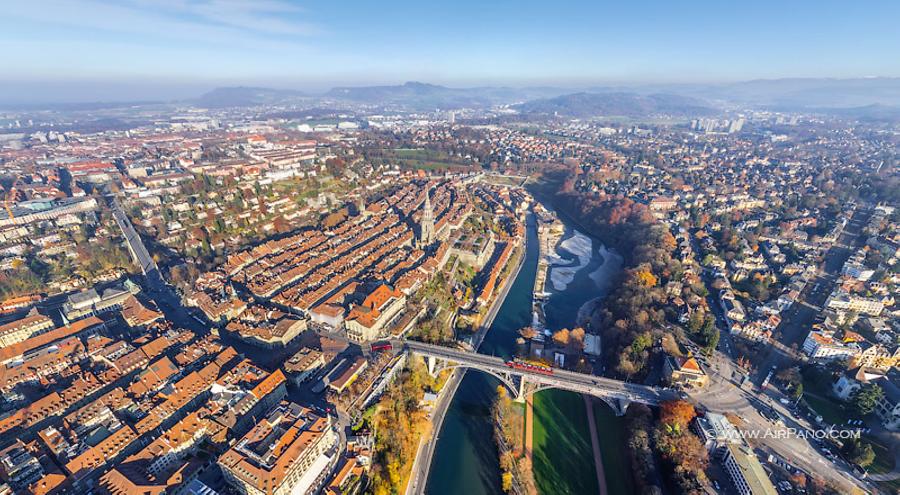 The founding of Bern was initiated on the peninsula formed by the River Aare in 1191 by Berthold V, Duke of Zähringen. The very first buildings were wooden and in 1405 they were destroyed by a major fire. The city of Bern that we can witness nowadays began its existence in the 15th century: at that time a new city plan with stone-dominated constructions was created.

Comparing to many other ancient cities the historic center of Bern features long and wide streets covered with unique awning-arcades. The most notable architectural landmark of Bern is the Cathedral (the Bern Minster), which is also the tallest cathedral in Switzerland (with a height of 100.6 meters). Its construction started in 1421 and lasted for 150 years, but then was ceased for centuries. Only in 1893 the installation of the spire was fulfilled and the Cathedral took on its present look. Its main entrance is decorated with a series of Late Gothic statues that represent the Last Judgment and is one of the best sculpture ensembles in Europe. 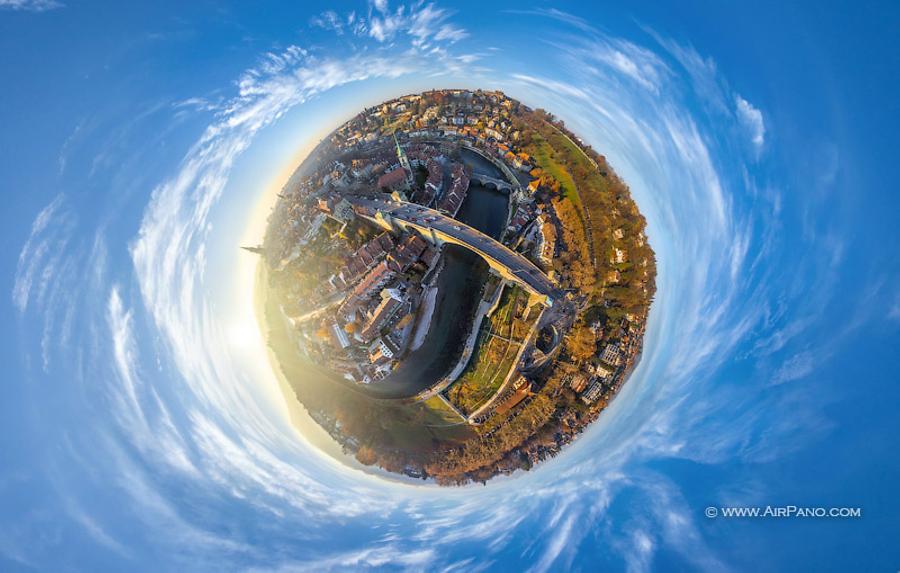 The other ancient and rather significant monument of Bern is the Zytglogge — a medieval tower with an astronomical clock. It was built in around 1220 and served as a fortifying gate tower and later converted into a prison. But after the great fire in 1405 it was completely rebuilt and since then it has become a clock tower. It received its present look after restoration works in the 16th century at the same time the clock, presently decorating the facade, was installed. Besides the sun, the moon, signs of Zodiac and many other astronomical things, the clock features a lot of other unusual characters: a fool — bell striker, a knight, a rooster, the god of time Chronos, and the symbol of the city — an armed bear. 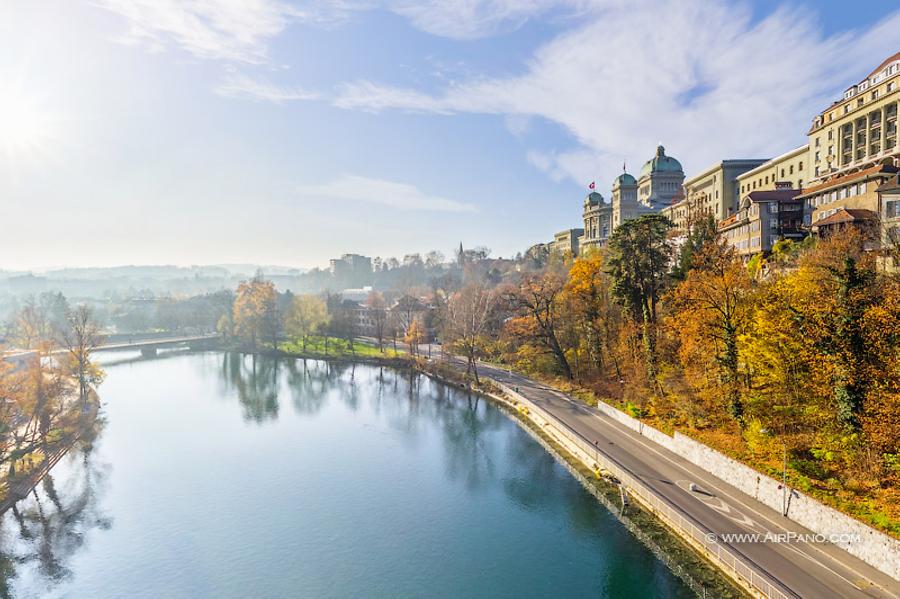 Sometimes Bern is referred as "the city of fountains": there are more than 100 of them, and each has its unique story. The most famous one is the Child Eater Fountain (the Kindlifresserbrunnen) at the Kornhausplatz. It was built in the middle of the 16th century in the place of a former wooden fountain, but the reason for choosing such a theme is still not revealed for certain. The fountain sculpture represents a sitting ogre devouring a naked child, holding a bag containing more children. According to certain theories, the giant is the Greek god Chronos, only one mentioning of whom was used to discipline disobedient children.

Among relatively new but still significant constructions of Bern there is the Federal Palace (1894-1902) which houses the main governmental bodies of the country. The total cost of its construction was a record even for Switzerland at that time — 7 million Swiss Francs. But in addition to its main functions it has become one more significant landmark of the city. The total height of the building is 64 meters, the inner height of the dome is 33 meters. The facade is decorated with numerous marble details, plasterworks and woodcarvings. 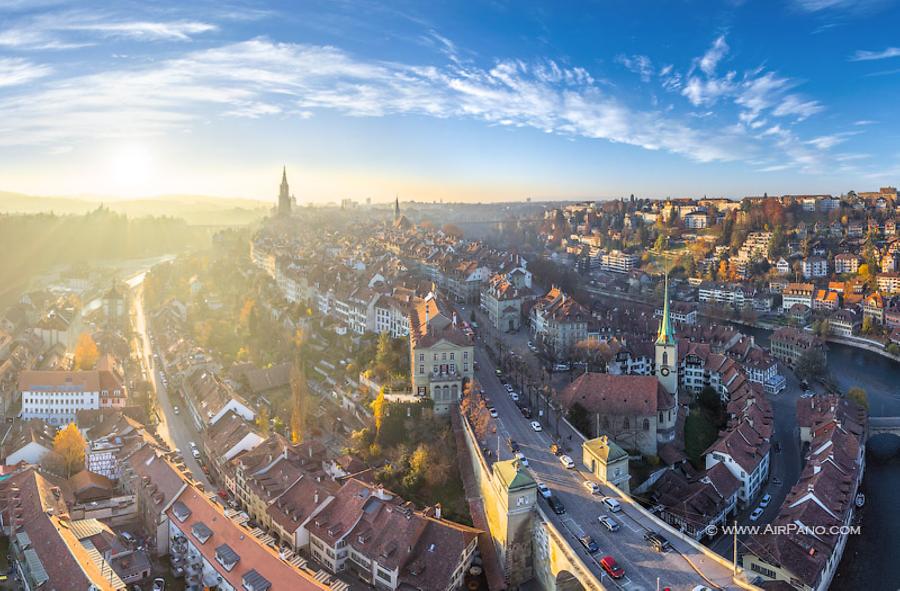 Together with sculptural and architectural monuments of Bern there are some unusual "natural" landmarks in the city. One of them is the Bear pit (Bärengraben) — a special place for keeping heraldic animals. Situated at the eastern edge of the old city of Bern, on the bank of the River Aar, there is a park where bears have enough space and conditions for fishing, climbing trees, playing and even resting in seclusion. One more place where you can forget about fuss and noise of the city is the Rose Garden. In addition to the 220 species of roses you can also enjoy the look of the irises and rosebays. 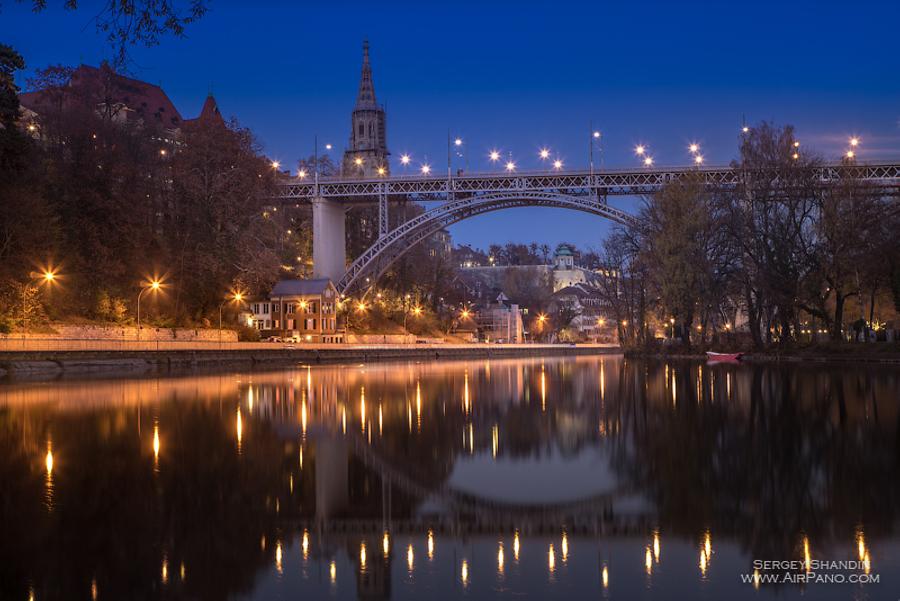 And, among other sights of the capital of Switzerland, there are a lot of great museums — beginning with the Einstein museum and ending with the Wildlife and Hunting museum, all of them are waiting for visitors! Of course, this city is worth visiting personally, but for now, you can visit it even being far away from it — through our panoramas!