The shores of Lake Geneva are sometimes called the Swiss Riviera. And of course, this name is rather formal: it covers different cultural and historical places of these lands, but all of them lie along the shore of the well-known lake.

AirPano suggests having a tour around several corners of the Swiss Riviera. Lausanne is one of them. It is the place where the history meets the modern life. The International Olympic Committee and other international sports federations are located here, and that's why the city was given the unofficial status of the Olympic capital. But the ancient architectural monuments, palaces, temples, museums, calm streets and marvellous parks are not less interesting. In total, Lausanne has preserved 46 objects of the national importance, and the remnants of the Roman settlements in Vidy, Tour Bel-Air, Chauderon bridge, the railway station and Mon-Peros park are among them. 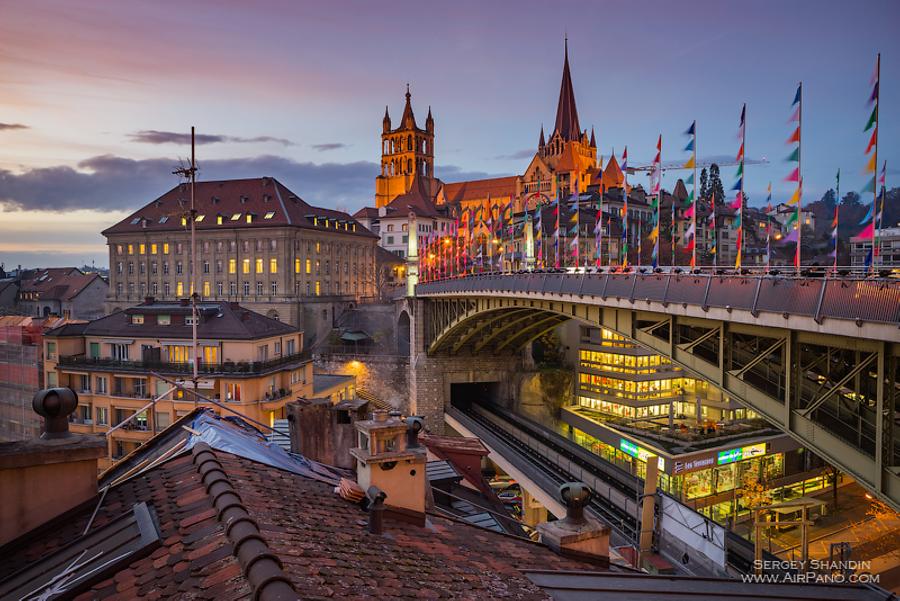 The main square, which is filled with the buildings dated the 18th-19th centuries, is named after Saint-François, and here is the temple, together with the cathedral of Notre-Dame located in La Cité, are the main architectural dominant of Lausanne. The other great landmark of Lausanne is the marvellous landscapes of Lake Geneva. There is also the Flon river that once was flowing through the city, but it has been covered since the 19th century and now all the bridges of the city are pedestrian.

In addition to history and culture, Lausanne is famous for the wine: the vineyards of Lavaux are located on the 30-kilometres long field along the bank of Lake Geneva. It is one of the most ancient winemaking areas in the world: people started to grow grapes here back in the time of the Romans and carried on through the medieval age. The period of the maximum flourishing was in the 12th century when the lands went under the ownership of monasteries.

The main part of the wine is made from Chasselas grapes (68%), while Gamay and Pinot Gris grapes are used for only 11-12% of the wine. One can try this beverage in wine vaults open for tourists and enjoy the marvellous view of the sunlit terraces at the same time.

In 2007, Lavaux was listed as UNESCO World Heritage Site. But not only the vineyards are considered to be the heritage. There is also Château de Chillon (Chillon Castle) on this list. In 1160, the Savoys, one of the most powerful dynasties, built a stunning residence on the shore of Lake Geneva. The castle was constructed off the shore on a small rock. The windows of the living rooms face the water, while the other side facing the land is fortified with towers. The castle was constantly rebuilt during the centuries, and by the 16th century, it had become so inaccessible that it was used as the prison. Now, this castle houses the museum, and the building itself is a marvellous enhancement of Lake Geneva. 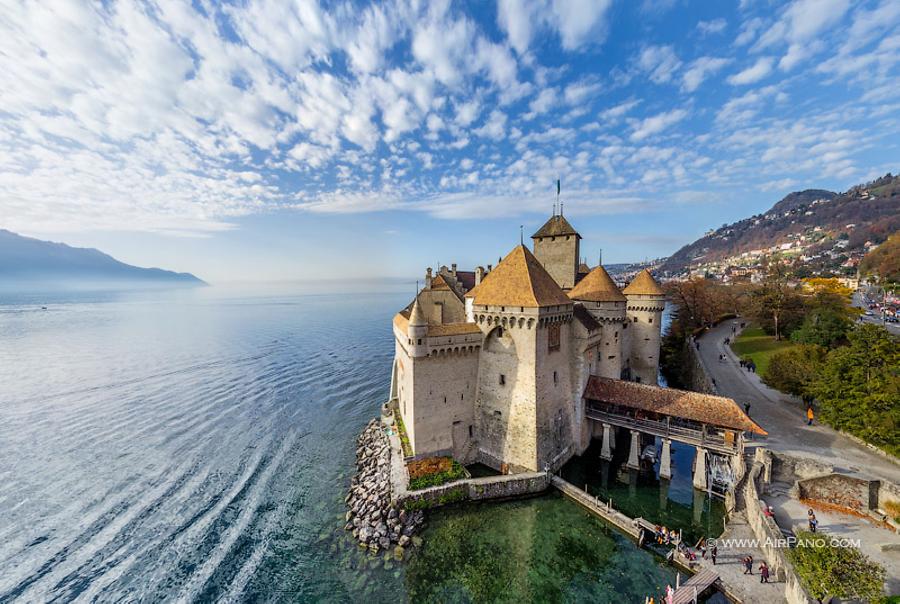 One more interesting place in Lavaux area is Vevey old town. The ancient Roman maps featured it as a settlement site on the way between Rome and Britain. Ptolemy, the ancient philosopher, mentioned this place in his works, and in the 19th century, it became a favourite place of high society. In the middle of the 19th century, Henri Nestlé began the food production, while the other citizen - Daniel Peter - has designed the first recipe for Swiss chocolate. The association of these two ideas resulted in the creation of giant company Nestlé with the headquarters still in Vevey. And the building itself is the historical heritage of Switzerland. 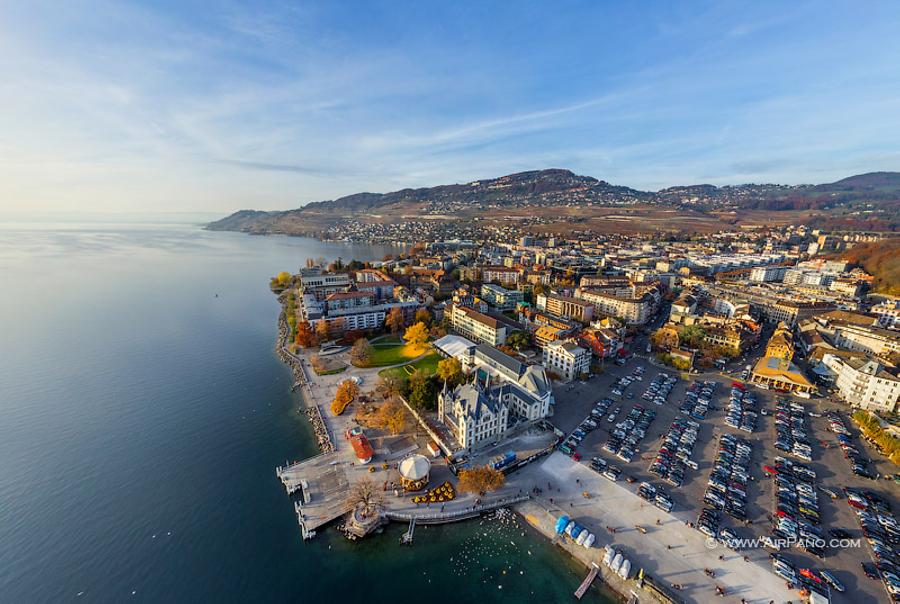 Vevey has 14 building of national importance in total, including Grenette located on Grande-Place. Previously, it was a seed storage, but now the building houses the tourist centre. The square itself faces Lake Geneva, and weather permitting, here you can enjoy the view of the Savoy Alps. Among the most unusual sights of Vevey, there is a huge fork standing in the amid the lake. It was installed by Alimentarium museum to celebrate its 10th anniversary in 1995. 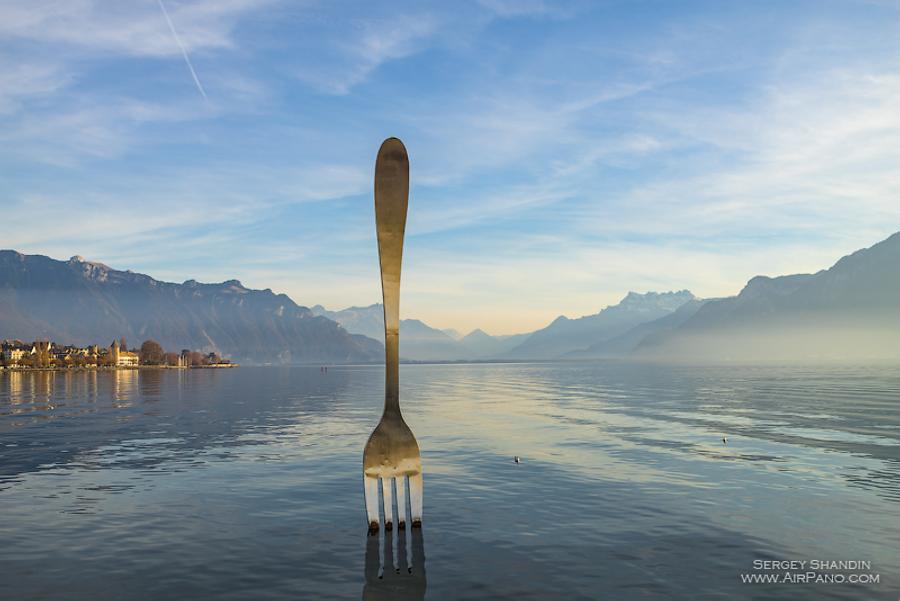 Fork of Vevey, a monument on Geneva Lake, Vevey
© AirPano