The Moose is loose# 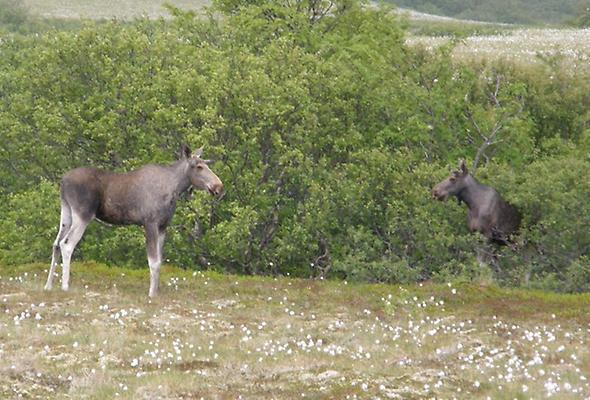 Thinking about Sweden often means thinking about moose (Alces alces). Sweden is assumed to be the most densely populated Moose country in the world with an estimated population of three-hundred to four-hundred thousand animals in summer.

Male moose get bigger than female ones with a length of up to 300cm and a height of 170-210cm. With a maximum weight of 500kg they get heavier too. Altogether it is the largest kind of deer. They prefer leafs, buds, sprouts and bark of coniferous or deciduous trees. Depending on the season grass, herbs, berry bushes, aquatic plants as well as grain and crop plants complement their diet. In summer moose are solitary animals, whereas in winter they form small groups of individuals. Swimming and bathing are essential for the wellbeing of the king of the forest. During spring and autumn they migrate long distances of many kilometres.

Moose can be found in every part of Sweden with the only exemption of the island of Gotland. When driving through the landscape watch out for them, but keep in mind that not every brown unidentified object is in reality a moose, oftentimes they turn out to be tree stumps, but now and then you may get lucky and spot one.

The natural live span of a moose is about twelve to twenty-five years, it is however often shortened by human influences and activities, like hunting and traffic. Each autumn about one-hundred thousand animals are shot, because the populations of their predators, namely wolf and brown bear, are sorely depleted, and the resulting damages of moose in the forestry are high. Approximately thirteen car accidents involving moose occur every day, with 3.000 to 4.000 moose fatalities per year.