Gamla Uppsala ("Old Uppsala") is a village outside Uppsala in Sweden. It had already some 15.000 inhabitants about 1850.

As early as the 3rd century AD and the 4th century AD and onwards, it was an important religious, economic and political centre. Early written sources seem to indicate that already during pre-history, Gamla Uppsala was well known in Northern Europe as the residence of the Swedish kings.

During the Middle Ages, it was the largest village of Uppland, the eastern part of which probably originally formed the core of a complex of properties belonging to the Swedish Crown.

It is generally accepted that in Old Uppsala the kings of the Swedes have ruled, claiming kinship with the fertility god Freyr.

Beneath the grand mounds, supposedly the tombs of Aun, Adils and Egil, people are assumed to have gathered every nine years for great sacrificial feasts, offering both animals and humans to the glory of the gods. 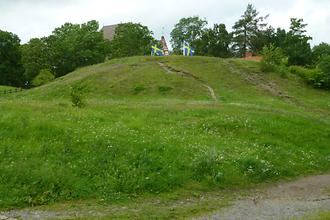 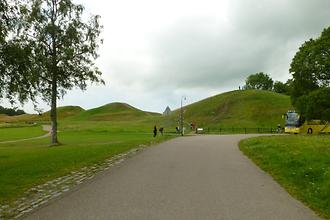 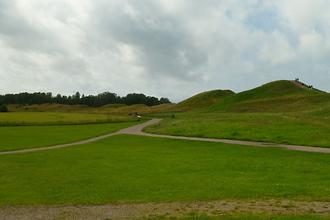 In the 1070s Adam of Bremen suggested that looming over the site was a golden temple. Adam of Bremen wrote and added material to a historical treatise “Gesta Hammaburgensis ecclesiae pontificum” in the period 1073 to about 1085. It is one of the most important sources of the medieval history of Northern Europe, and the oldest textual source reporting the discovery of coastal North America. It covers the entire period known as the Viking Age, from 788 till the rule of prince-bishop Adalbert in Adam of Bremens’s own time (1043–1072).

You can see in some of the photos three large burial mounds. The legend is that these hold the ancient Norse gods, Thor, Odin and Freyr. These are the Eastern, Middle and Western mounds. The smaller mound with flags on top was the Court Mound. The Church in the photos used to be a great Cathedral, that was damaged in a fire and now serves as a Parish Church, in a much reduced version. Because of both it's historical and mythological significance, Gamla Uppsala is now an important archeological location. 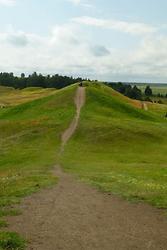 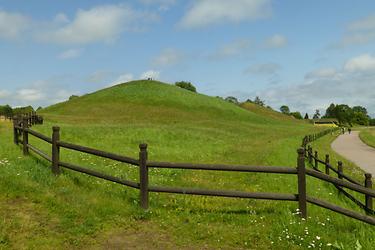 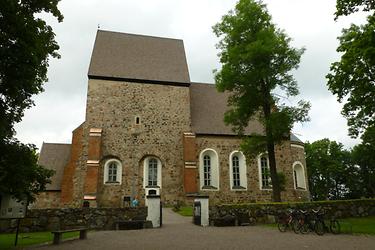 And excavation continues. Just to show the excitement of even recent excavation here is a quote from the well-done Web-site :

“An area west of the church, by the vicarage, was the scene of a 1973 discovery of four boat graves, a horse grave and five cremation graves. An elderly woman had been laid to rest in a 5 metre long boat. Fragments of her attire showed that she had been dressed in silk clothes, possibly from China. She was wearing an interesting pendant, depicting a woman with a mead horn. The figure has been interpreted as the fertility goddess Freya.”

Quite recently, remains of a grand and previously unknown monument from the 5th and 6th centuries was discovered. Quoting form the same source (… indicate omissions):

“ A couple of hundred metres from the famous royal mounds ….two long rows of massive pine posts have loomed over the countryside. One of the rows was close to a kilometre long, with 144 posts, which up until now had been hidden under the Vattholma road…The other row of posts was at least 500 metres long and ran a few hundred metres south of the royal mounds before it turned north and ran along the ridge… This is an extraordinary monument. It may be a territorial marker, but it could just as well constitute a religious or ritual boundary.”

As excavations continue, more and more of the mysteries of Gamla Uppsala are revealed. Stay tuned!