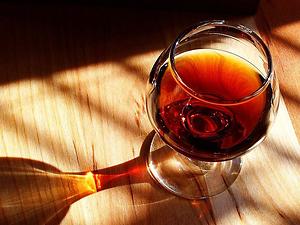 Port wine
Photo: Jon Sullivan under CC taken from Wikimedia commons
Porto (sometimes called Oporto), the second largest city of Portugal after Lisbon, is famous for its port wine, a red, rarely white dessert wine. It is one of the main industries of the city. The wine was named after the UNESCO World Heritage Site of Porto as it was developed there. There are in fact some other good wines from the region, but port wine is the most famous one. Vila Nova de Gaia is home to the port wine trade. It is located at the banks of the Rio Douro opposite Porto. Visitors are drawn from the city centre over the Dom Luís Bridge by port wine exporters. Grapes for the wine grow in the Douro Valley. After the harvest barrels filled with the new wine are transported downriver every spring. In cool cellars and warehouses the maturing process of the port takes place. 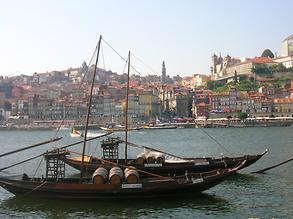 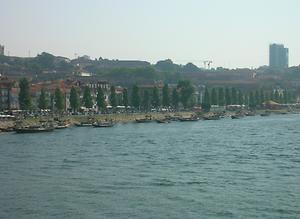 England traditionally has been the main market for port. First trades in port between Portugal and England began in 1678. A treaty, called Methuen Treaty, consolidated trade among these two countries in 1703. The southern shore of the Rio Douro was chosen by British merchants as the site of their wine cellars and warehouses, because the orientation to the north guarantees moisture and a cooling sea breeze. In former times kegs were transported by sailing boats, so-called 'barco rabelos'. Nowadays modern stainless tankers undertake this task. Most of the traditional port wineries still have a traditional sailing boat tied to quay outside, mainly for the tourists. But once a year the Rabelos boats, loaded with barrels, take part in a traditional regatta on June 24th.

There are different types of port wines depending on their age and colouring. One of the youngest and cheapest ones is the Ruby with a fruity taste. Tawny is aged in wood and has a special colour. A Tawny from a single year is called Colheita. The most expensive one is the Vintage which is aged for years in bottles. If you want to drink port as an aperitif, you choose white port. 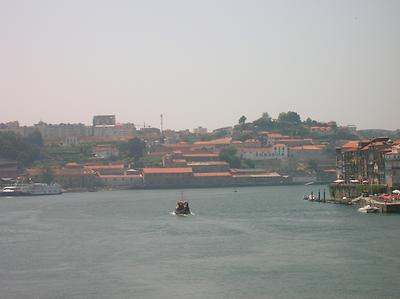 Directly on or very near the quays of Vila Nova de Gaia several firms have their own lodges where port wine ages. Many of these firms were originally owned by the British. Most of the companies found at Vila Nova de Gaia are now owned by international drink companies where once they were owned by families. 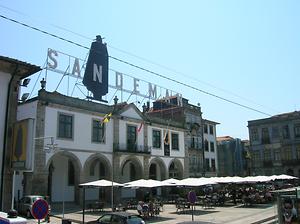 One of them most famous ones is Sandeman. It was founded by the Scotsman George Sandeman with a credit of his father over 300 Pound in 1790. The convenient location directly on the quayside makes it popular with tourists. In 1928 one of the first trademark images ever was created, namely the so-called 'Don' of Sandeman, a man in a black cloak. Nowadays the company is owned by Portuguese. One of the best port wines is created by Taylor's, a firm which was founded over 300 years ago and is still independently owned. Graham's is special as the Symington family, proprietor of the company, owns its own vineyards. The business has other brands too, like Dow's and Warre's. It was founded in the early 19th century. There are some other wineries which should be named like Ferreira, founded in 1751 and still owned by Portuguese or Barros, established in 1913 and led in the third generation by a Portuguese family. Others are Ramos Pinto and Real Compania Velha, founded in 1756 by King José I to break the British monopoly.