Etna and Vesuvius are the two best known, and often only known, volcanoes in Europe, but there are in fact other ones, two located just off the northern shore of Sicily on the Aeolian Islands Stromboli and Vulcano. In former times volcanoes were often thought to be the gate to hell and eruptions the wrath or revenge of gods, with several legends twined around them. This seemed rather plausible as often dramatic incidents are connected to the eruptions, like earthquakes, ash clouds darkening the sky or the destruction of buildings by lava flows. 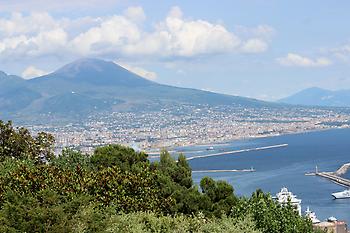 Vesuvius, 2004
Photo: Miguel Hermoso Cuesta under CC taken from Wikipedia
One of the most famous volcanoes of the world is Vesuvius Monte Vesuvio, Neapel, Italien , who is sadly known for the disastrous eruption in 79 B.C., when three Roman cities, Pompeii Pompei, Neapel, Italien , Herculaneum Herculaneum Archeological Area, Ercolano, Neapel, Italien and Stabiae, were destroyed. Vesuvius, the only active continental volcano of Europe, is normally not a very spectacular volcano as often only small plumes rise up, but he is certainly one of the most dangerous ones. Long dormant periods are typical which lead to massive outbursts. Surprisingly enough the slopes of Vesuvius are densely populated, the city of Naples with nearly one million inhabitants is located a few kilometres to the north-west. In total approximately three million people live in the circle of influence of the volcano. It doesn't bear thinking about the catastrophe an outburst would cause.
At the top Vesuvius is 1.282m high and has a crater with a diameter of 650m and a depth of 230m. Over the course of time more than 900 plant species settled on the volcano of which 610 are still found there, 18 of these are endemic species and only found there. Over 20 different kinds of orchids can be spotted on the slopes of Vesuvius. The volcanic soil is very fertile and promotes agriculture, especially vineyards and orchards.
One of the most abysmal eruptions occurred in 1631, the last one in 1944. There were several crevices at the bottom of the crater emitting lava flows in the period between the two events in 1631 and 1944. Statistically an outburst is overdue, but the gas temperature and seismic events are decreasing which speaks against an upcoming eruption. Interconnected with the magma chamber of Vesuvius are the so-called Phlegraean fields in a distance of about 15km. Seismic crises and rising temperatures point to an imminent eruption of the Solfatara of Pozzuli Solfatara, Pozzuoli, Neapel, Italien , one out of 50 craters in the area. 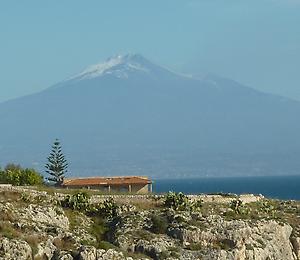 In the ancient world Etna was thought to be the forge of Hephaestus, who was assisted by one-eyed Cyclops. The caldera was considered to be the gate to the underworld into which Hades abducted Persephone. 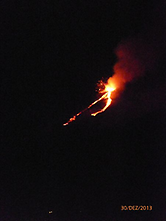 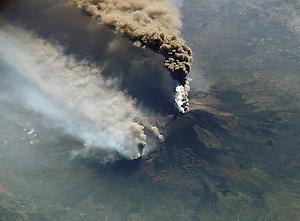 Etna Ätna, Zafferana Etnea, Catania, Italien is 3.352m high, but like every other active volcano the height can vary because of eruptions. It is the highest active volcano in Europe and more than 1.400 metres higher than every other peak in Sicily. There is a high diversity of tree and plant species on the slopes of Etna which turns into a desert-like landscape as you go further up the mountain. The volcano is very impressive and easily accessible by either car or cableway. In 15 Minutes you get to ride to the height of 2.500m, as one out of 300.000 visitors per year. An eruption destroyed the cableway in 2001, which was reopened in 2004. If you want to reach the caldera, you have to overcome a difference in altitude of about 400-500m and hire a guide, otherwise the ascent is not permitted. There are several skiing tracks on the slopes of the volcano.
One of the most disastrous eruptions took place in 1669; even Catania Catania, Italien was affected as parts of the city were overrun by lava flows. Castello Ursino Museo Civico al Castello Ursino, Catania, Italien was originally built on the shoreline, after the lava ceased to flow it was located 1km inland. Probably one of the most spectacular outbursts occurred in 1983 when lava flows threatened several settlements. Blasting operations had to be undertaken to force the lava flow into safe areas, with limited results.
Etna is located in a densely populated area threatening thousands of people. The highest risk may be a landslide shearing-off the entire eastern face of the volcano burying numerous cities. 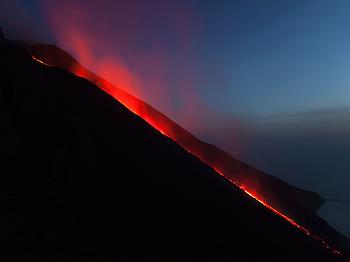 Stromboli, 2014
Photo: Unukorno under CC taken from Wikipedia
Stromboli Stromboli, Lipari, Messina, Italien is often called lighthouse of the Mediterranean Sea, because he periodically spews red-hot lava from a side-caldera, which can be seen over the sea from afar. It is by far the most active volcano in Europe with only the top of the nearly 3.000m high volcano sticking out of the sea. In ancient times it was claimed that Stromboli was the seat of the god of winds, called Aiolos, eponym of the Aeolian Islands. From the main caldera the eruptions can be admired nearly without major dangers, if you are cautious and stick to certain safety regulations. To get there you have to hire a guide, as it is prohibited to ascend the summit without one, due to security reasons. The trek up the mountainside, with a difference in altitude of 900m, is very popular by tourists especially at night, when eruptions are more impressive. Stromboli has a special kind of eruption, called Strombolian activity, which is a steady eruption with lava shreds thrown into the air. The volcano is active since 300 B.C., which means that for the last 2.300 years Stromboli nearly constantly spewed lava. Every now and then major outbursts occur. The last ones were between 2002 and 2003, since then the Strombolian activity level increased considerably. 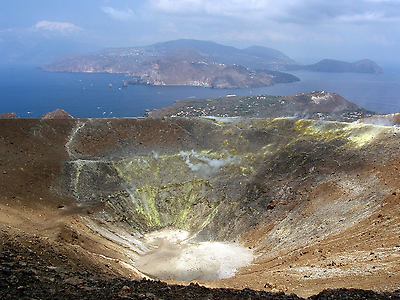 Gran Cratere, 2006
Photo: Man77 under CC taken from Wikipedia
Sulphur odours herald the arrival of the island of Vulcano Vulcano, Lipari, Messina, Italien while travelling between the Aeolian Islands. The volcano on Vulcano is probably the most dangerous one found in the archipelago, because dormant periods are followed by sudden eruptions. From the base of an older sunken caldera Gran Cratere Gran Cratere, Lipari, Messina, Italien grew over the last 10.000 years. Since the Stone Age humans were witnesses of the volcanic activity, although the island remained uninhabited until the 19th century because of the unpredictability of the volcano. Between 1888 and 1890 the last outburst took place, when lava bombs weighing tons were catapulted into the sky. Presently Gran Cratere is in a phase of fumaroles, with hot sulphur vapours leaking from crevices. Some scientists expect another disastrous eruption soon.