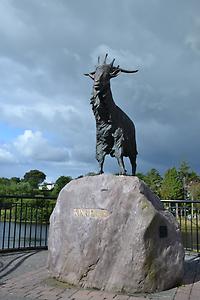 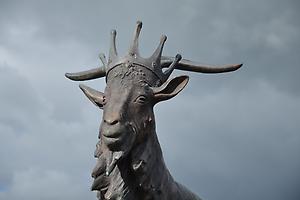 Head of King Puck
© Elisabeth Ertl
Every August in Killorglin Killorglin, Irland , a small town in Ireland, a traditional fair takes place, the Puck Fair, which means "Fair of the He-Goat". Its origin was lost in the mists of time, however a charter from 1603 by King James I, granted a fair in Killorglin, County Kerry, legal status. References and hints point to an already well established fair in the 17th century.

The most widely spread myth concerning King Puck implicate the pillaging and ransacking of the countryside at the foot of the McGillycuddy Reeks, at the time of Oliver Cromwell, to the birth of the legend. While harassing a herd of fleeing goats one billy goat broke away and fled towards the village of Cil Orglain (Killorglin). The sudden appearance of an exhausted animal alerted the inhabitants to the upcoming danger and granted them time enough to take measurements for their own protection and their livestock. Honouring the animal seemed appropriate at the time, so an impromptu festival was instigated.

There are in fact several other legends and stories regarding King Puck. The origin is not really that important, since the fair gained significance as a social and cultural event and is nowadays famous in the whole of Ireland and even across the borders.

The fair lasts for three days and starts traditionally with the "Gathering Day" and the horse fair, but more importantly it is the day on which the Puck Goat is crowned and ascends the throne. "Fair day" follows afterwards, with its cattle fair and the general festivities. On "Scattering Day", the last day of the festival, the reign of Ireland's only king ends and he returns to his mountain home.