Approximately 3.4 million sheep frolic and graze on Irelands green meadows, moreover, after the lambing season the number drastically rises. Because of the agricultural policy of the European Union most of the lambs reach an old age since the owner of the sheep receives a premium per capita, although in reality there is no money to be made with wool or adult sheep given that only lamb meat is sold. Smuggling became attractive once again in the boundary region of Ireland and Great Britain, as sheep flocks are borrowed from across the border to increase one's own flock on the day the public sheep count is made. The high abundance of sheep leads in some areas to overgrazing and is turning into a serious problem. 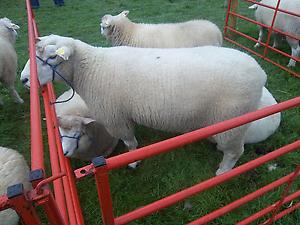 A breed of domestic sheep which originates in Galway, Ireland, is the so called Galway sheep. It is a large polled white-faced sheep with a characteristic bob of wool on its head, woolly legs and commonly dark spots on its ears. The sheep have an average weight of 80 to 85 kilograms and are mainly bred for meat.

The Galway sheep were developed because of the import of English Longwools in the late 17th century. Lord Roscommon, an associate of Bakewell, imported in the middle of the 18th century New or Improved Leicester (Robert Bakewell's Dishley Leicester) sheep. From this stock a large, white-faced polled breed developed which was commonly known as Roscommon. Between 1776 and 1779 English breeds were not very popular and some of them were even killed, for political reasons, by the Irish. In 1923 the Galway Sheep Breeders Society was founded by a group of breeders, as the Roscommon breed society was ailing. Over 6.000 ewes and 200 rams were inspected and of these only ten percent were accepted in the new breeding register. 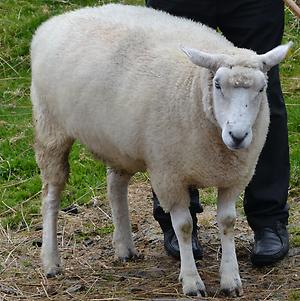 Before the famine, many different types of sheep were common in Ireland. It is often claimed that only one native breed, the Galway sheep, except for the mountain sheep which is not recognised, is still found in the republic. There are 39 pedigree flocks scattered around the island (virtually all are found west of the Shannon) with less than 1.000 true type sheep. Nowadays a subsidiary payment is given to breeders in Ireland to help preserve the Galway sheep.