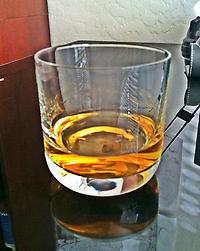 "Whiskey" originally means "water of life", "uisce beatha" or "uisge beatha" in Gaelic. A legal definition of "Irish whiskey" exists since the Irish Whiskey Act of 1980, which states that Irish whiskey must be distilled and aged on the island of Ireland, including Northern Ireland. Furthermore the spirit must be aged for at least three years in wooden casks and must have an aroma and flavour derived from the materials which were used. Whiskey is to be produced from a yeast-fermented mash of cereal grains, which are distilled to an alcohol by volume level of less than 94,8%.
A difference between Irish whiskey and Scotch whisky is that most Irish whiskeys are distilled thrice, while Scotch whisky is distilled twice. The flavour varies between the two, as Irish whiskey has a smoother finish than the Scotch whisky, which has smoky, earthy overtones, because of the use of peat in the malting process. There are in fact some exemptions in both countries, like the Connemara peated Irish malt whiskey, which is only distilled twice.

One of the first distilled drinks in Europe was the Irish whiskey. The knowledge of distilling drinkable spirits is thought to be derived from the distillation of perfumes in the Mediterranean area, which was brought to Ireland by travelling Irish monks around 1000 AD. Irish whiskey was first mentioned in 1405, eighty-nine years prior to the first record in Scotland. Once Irish whiskey was the most popular spirit in the world, but since the late 19th century the sales quantity declined. As a result of this the number of distilleries in Ireland was reduced to only seven, of which only four have products which are sufficiently aged for sale and only one which was operating before 1975. Since 1990 the situation of the distilleries changed, as Irish whiskey developed into the fastest growing spirit of the world, with a growth rate of roughly twenty percent per year. This led to the construction of new distilleries as well as to the expansion of some older ones.

A distinction between several types of whiskey common to Ireland is made, for example "single pot still", "single malt", "single grain" and "blended" whiskey. Single pot still whiskey is made in a pot still from a mixture of malted and unmalted barley. A pot still is a single heated chamber with a vessel to collect the purified alcohol. In comparison, single malt too is made in a pot, but it contains only malted barley. Grain whiskey is continuously distilled from unmalted grains, the flavour is lighter and more neutral and therefore it is often used in blends and seldom found on its own. 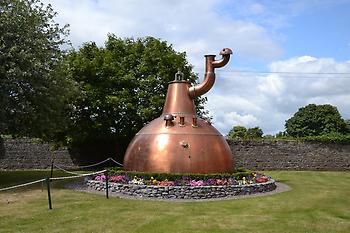 Copper still at the Jameson Heritage Centre, 2014
© Elisabeth Ertl
Traditionally only barley, yeast and water are used for the production of Irish whiskey. After the harvest yeast is dried in big rotary kilns to keep it available throughout the whole year. The grains are submerged, soaked in water and after that spread in drying lofts to help them germinate. During the malting process the sugar content changes, therefore the time at which the malting process is stopped is critical and requires an experienced maltster. After adding untreated barley it is powdered and prepared with boiling water and later on filtered. The flavour is then pumped down and filled into a wooden tank for the fermentation. Yeast is added which turns the sugar into alcohol. The next step is the distillation in big copper stills, where the brew is poured into the first of three connecting stills and heated until the gaseous alcohol is separated from the water. A cooled tube conducts the alcohol to the next still in line where the whole process repeats itself. After the third heating the contaminations are removed and the colourless alcohol is pure. It is then mixed with water, to reduce the percentage of alcohol, and filled into oaken barrels. In Ireland these barrels are used ones, which contained port wine, sherry or American whiskey. Over the course of years the ripening whiskey receives its distinctive flavour and colour. 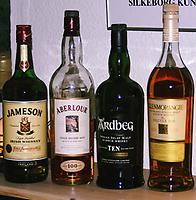 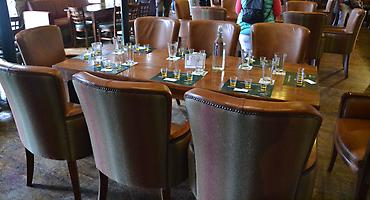 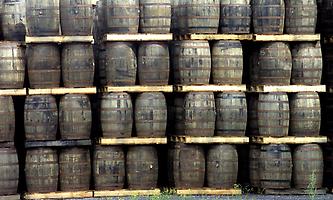