On the edge of the Grimsvotn volcano crater#

Before Dima Moiseenko go on his story the first part of which has been already told here (the 3-hour helicopter flight to the volcano), I would like to tell in brief about "the hero of the occasion" that is the Grimsvotn volcano.

The Grimsvotn is a not ordinary volcano. And in Dima's reportage there won't be the extremely high magma fountains as well as the red-hot lava streams flowing into the ocean, though for 24 hours the Grimsvotn was gushing out ashes dozens and hundreds times more than erupting Eyjafjallajokull last year.

It is unique because the huge 500-meter ice layer covers it. Besides, on the top of the volcano there is a caldera - enormous cup full of ice too. This cup's area, or in other words - ice lake, is 35 km². The volcano was erupting and the ice began to thaw. The eruption melted the ice layer in the caldera and much water accumulated there. As a consequence, a new lake appeared with a cone in its center.

Due to the Grimsvotn was covered with ice while it was erupting the steam explosion happened similar to the explosion of a steam pot. That is why the altitude of the steam and ash fountain was so high and reached 15-20 kilometers. Although this year eruption is more grandiose than the last year eruption of Eyjafjallajokull, the Grimsvotn gushes out the special basaltic ashes which fractions are bigger and heavier. They quickly fell down and the air service was not paralyzed all over Europe as it had occurred in 2010.

Dima arrived in Iceland on the fourth day of the eruption but the volcano began to calm down. Then from the locals he found out than the Grimsvotn's eruption usually lasts 3-7 days. But when on TV they broadcasted that the ash fountain was 20 km height but we didn't think about it

First Dima flew by helicopter over half Iceland but the volcano was covered with clouds and he wasn't able to shoot. But he acquainted with a guide and they got to the volcano by driving and walking.

So, below you can find the second part of the reportage.

Well, we never give up, especially if we arrived from sunny and warm Moscow in the other end of the earth. Except a helicopter I was able to get to the Grimsvotn by super-jeep. Super-jeep is a high elevated with big and wide wheels off-road vehicle used in Iceland. Frankly speaking, the rent price is not low for such entertainment including the service of ex rally champion of Iceland - Oscar.

I was highly recommended not to go alone but to take somebody with me (later I understood why...)

We left at 8 p.m. in order to reach the mountain surroundings before the sunset and to stand at the volcano's crater before the sunrise. Having had an experience in shooting from helicopters, I asked Oscar about the warm clothes and immediately received from him a one-piece suit with thick fur inside which would be useful for Icelandic woodcutter or oil industry worker (if there are forests or oil in this country).

First two hours the road was asphalt then it became gravel and the snow areas and ice fields appeared. The champion drove 80 km/hour taking notice of nothing just having reduced pressure in tires. Finally, I understood that my personal jeep is nothing here.

After not very picturesque sunset we started climbing a glacier where, on the west, our volcano was located. The white nights have already begun in Iceland and the darkness lasts only 3.5 hours, so, little time left from the sunset till the sunrise and the Biggest Glacier in Europe was waiting for me!

Telling the truth, Icelandic glaciers differ from the standard cracked ice fields of Patagonia or Antarctica. In Iceland a glacier is covered with a thick snow layer smoothing out the surface and it is very easy to move by super-jeep.

But... not that day. As swearing Oscar explained me, the fallen down ashes had covered the ice unevenly. Where there was a thin ash layer, the sun heated up it much and melted the ice surface. And vice versa, if the ash layer is more than 10 cm it was a good thermo-insulation. In short, it was better even not to think about calm trip of 40 km long and 1 km height: we were shaken from side to side so much...

...so much that when the driver announced about our arrival to the Grimsvotn I just fell out from the jeep.

His imagination of the word "near" was completely in accordance with Icelandic understanding of the word "safety" because the crater was seen 2 kilometers far from the place we stood on. Well, spherical panoramas are not shot in such distance, so, I had to explain it to Oscar and offered various ways to find the decision: to get to the crater from the right or the left side, or from behind, perhaps. Due to in front of it there was a 500-meter precipice I didn't insist on that variant.

I was just given the binoculars and heard "cracks". 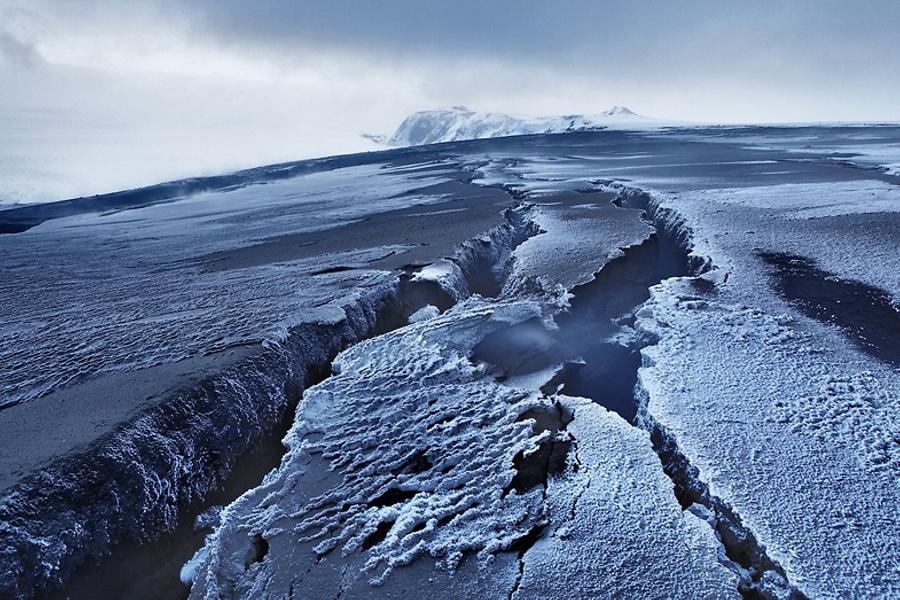 Having estimated that there were the 10-meter precipices behind and on the left which represented a difficult task even for Super-Mega-Jeep, I chose the variant to get there from the South.

I could not believe that Oscar was the same man who took me there: then he drove the jeep to the crater very smoothly checking almost each meter of the surface. Then the driver showed the hazes of sulfuric evaporations gushing out from the ash layer into the melted snow, poked into a couple of chasms where our jeep could have gone in easily and refused to go forward. Less than 500 meters left.

I was guided by Max who is Icelander of the Ukrainian origin. Having tied with a rope to be in safe, we went ahead. The way was difficult: it was even worse than to step upon sand because the ash layer was sinking 10 centimeters down.

Near the first crack of about 50 centimeters width and depth, where the nasty sulfuric smell was gushing out from, Max stopped and stood still. I jumped it over and went on moving. The rope was drawn.

I had to explain to Max that it would be impossible to shoot the volcano as the crater was not seen from that position. And it would have been better to stay and drink beer in Reykjavik rather than go to the volcano... I reminded him that he had to follow me and stand by, so, it was needed that he just followed my steps... Bridging over the difficulties sooner o later I was standing on a small hillock over the crater. I had half an hour till the sunrise. 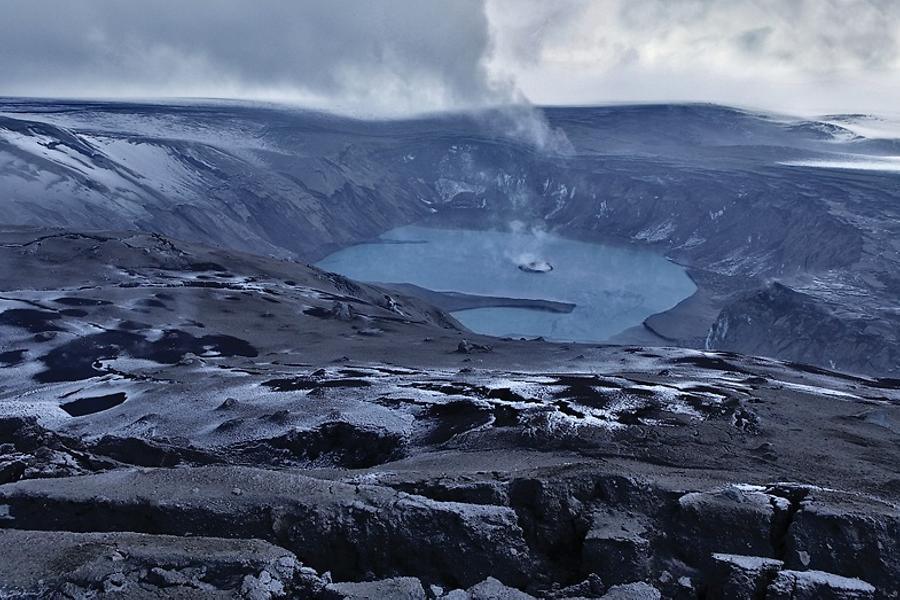 Then 5 hours I was waiting for the only moment when the sun, finally, lighted up the small crater in the center of the lake.

My memories of next 5 hours standing there and feeling ice, wearing me out wind can be described with the following short phrases:

...I dragged my feet to shoot at dawn

...but, of course, there was no sunlight

...there was a big cloud instead the sun

...a couple of hours passed and I was still standing at the edge between the ice cracks

...My feet were absolutely cold; I shot a couple of panoramas with no sunlight

...and went back to the car (about hundred meters up)

...I looked back: a big ash cloud was rising over the volcano... 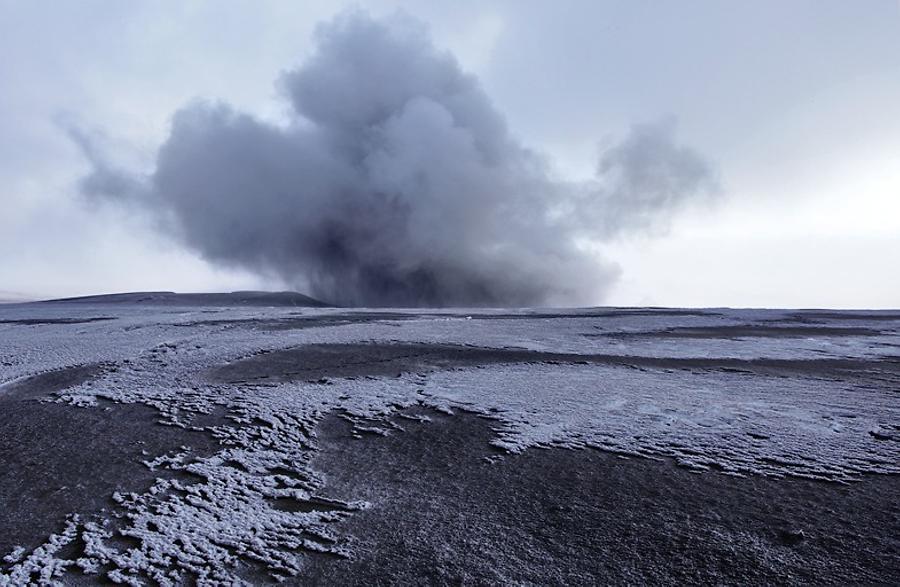 ...but the crater was not seen from the parking

...one minute later the cloud died

...I could make a couple of shots just off the cuff

...as soon as I had warmed myself in the car, the sunlight appeared

...I took the equipment and went to the edge again:

...the sun was shining behind the cloud

...but it lighted up only the crater's part... I had to wait

...I shot a couple of spheres of the lighted part 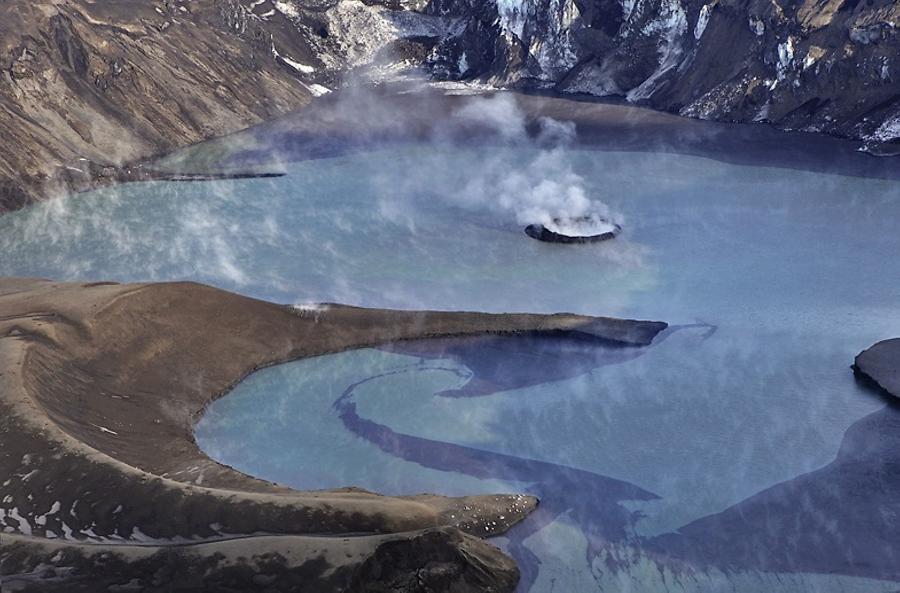 ...And it was not clear: to wait or not to wait

...I wanted the sun would light up the small round volcano in the center of the crater's lake

...the window blew, the ashes flew. I hardly breathed. The ashes fell into the eyes and objective...

Crashing again. As I understood later, the big crater's edges were of ice and ashes and from time to time the emissions happened not from the main crater but from aside: either from the left or the right side from me. As a result, the part of the vertical slope fell with a great noise into water and on its place the powerful ash emission happened.

After the next 100-meter block of ice had fell down and the wind had taken the thick sulfuric evaporations from the neighbor crack, I attentively observed the area I was standing on and decided immediately to go away... 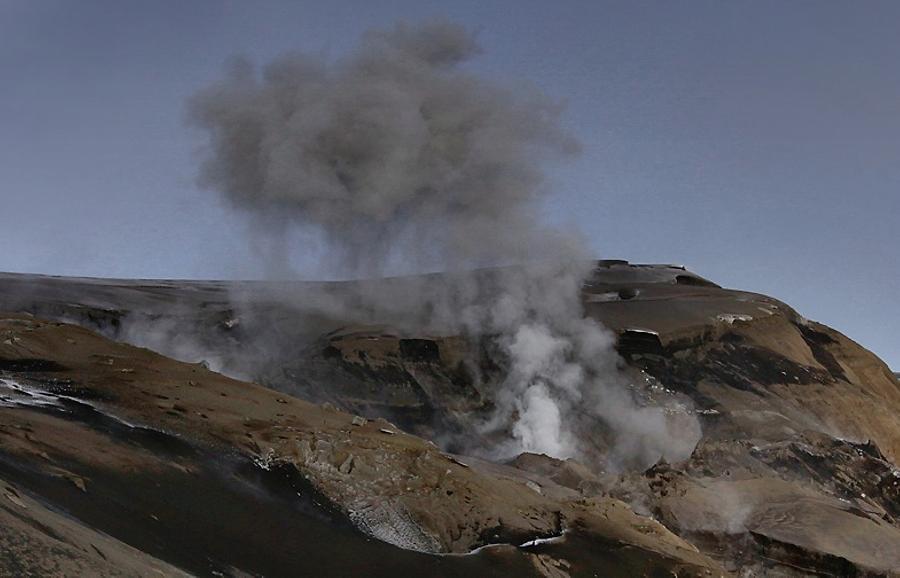 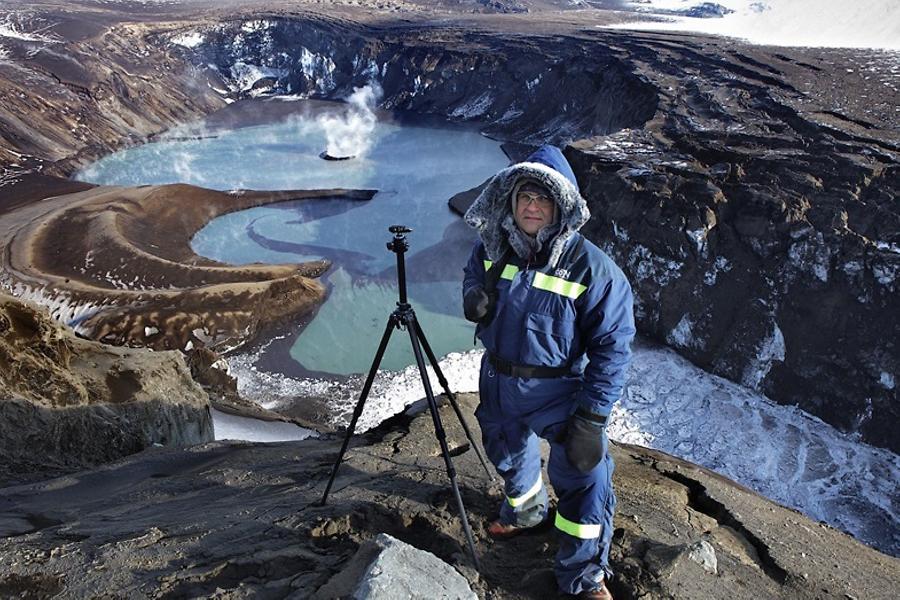 I was climbing up to the car but on the half way the sun overlooked again, I gave a deep sigh, left the tripod, rucksack and took only two cameras and ran back to the precipice. There, while the sun was shining, I shot the last panorama holding the camera in the hands. 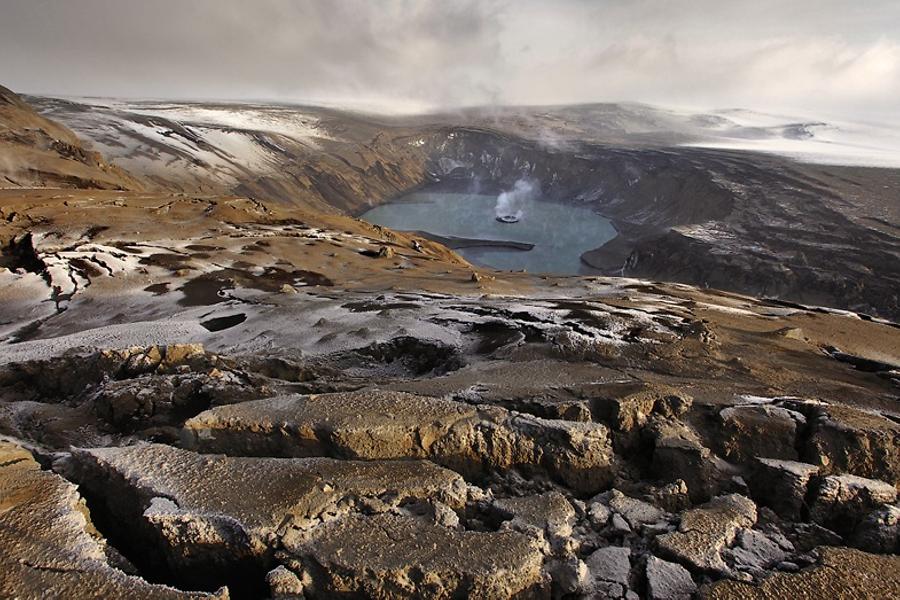 The way back almost was not remembered me. We were shaken; Oscar was crossing the rivers not decelerating. 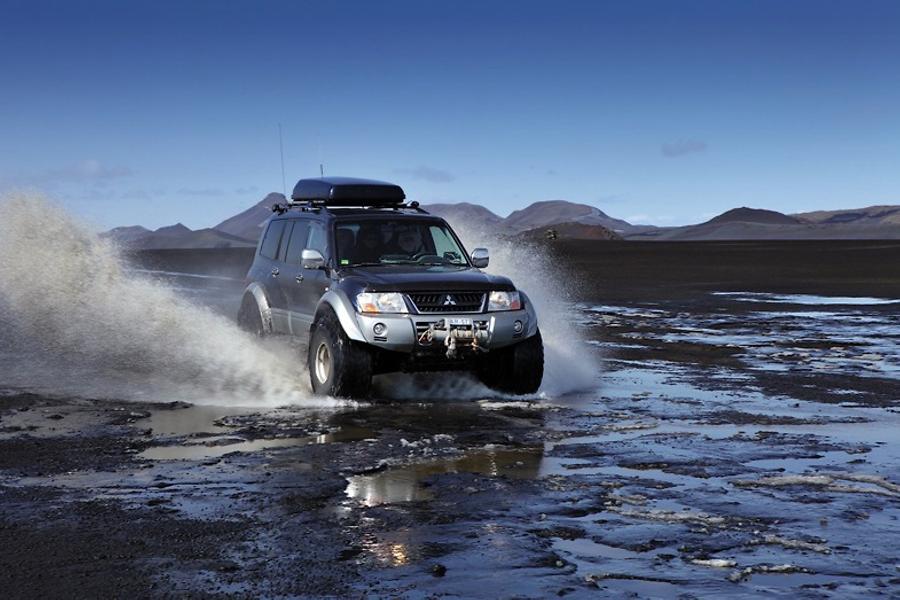 We had breakfast in a weather station: Max turned out a provident cook. Then Asphalt and Reykjavik.

So, the volcano has been shot and the spherical panorama has been ready, I am at a hotel room and while the files are uploading into ftp AirPano I'm writing the report. Now I'll go to bed and tomorrow I could, probably, go to the Blue Lagoon and relax there.

1 Panorama of On the edge of the Grimsvotn volcano crater