Photos by Dmitry Moiseenko and Stas Sedov, members of the AirPano Team that is a member of the global-geography Consortium.

Greece is known for the beauty of its islands and the legendary island of Mykonos is one of the most fascinating of them. It had received its name in honour its first ruler, the son of the god and the antique hero Apollo. The island is said to have been the location of a great battle between Zeus and Titans and the place where Hercules killed the giants that were previously considered invincible by luring them from the protection of Mount Olympus. This legend explains the landscape of the island: according to it, the large rocks all over the island are said to be the petrified corpses of the giants. 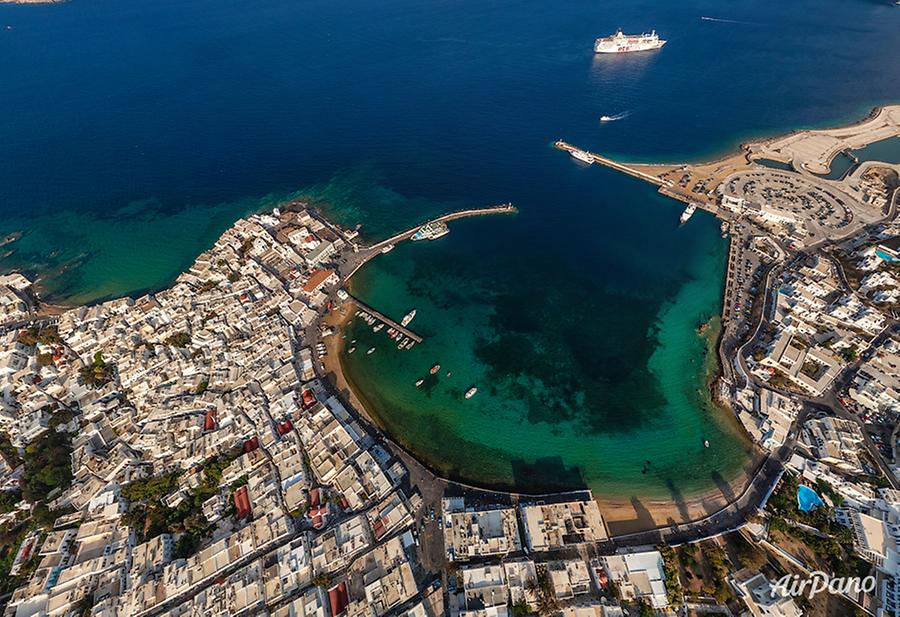 Mykonos is composed mostly of granite and the terrain is very rocky with the lack of dense vegetation in comparison to many other Greek islands. Thus, only the most enduring plants have taken roots here: drought resistant flowers, evergreen bushes, pines and cypresses. Some areas feature palms and olive groves, that's why the landscape seems to be greener and the air is fresh and clean.

Mykonos's nickname is "The Island of the Winds": the winds are strong here due to its geographical position. The island also features no rivers and it does not allow the agricultural industry to be developed. Both these conditions made Mykonos one of the most sparsely populated islands of the Cyclades.

In ancient times, Mykonos only prospered as a trading centre, and nowadays it is a popular tourist destination. Two reservoirs collect seasonal streams so that the guests of the island suffer no lack of the comfort and the picturesque beaches with golden sand they are looking for. New AirPano panoramas will introduce you to the most famous and bright resorts of Mykonos. 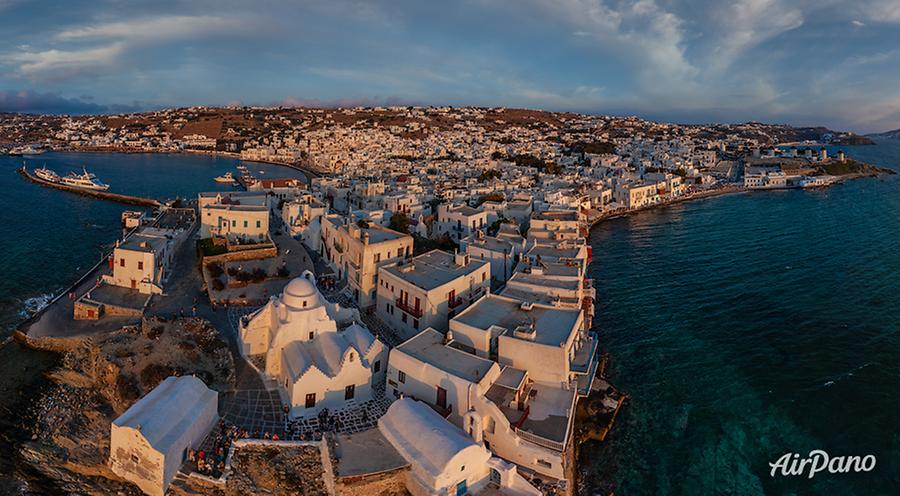 It is, in the first place, Platis Yalós — one of the first resorts of Mykonos to be created. Once it was a calm family spot, but the magnificent nature, picturesque landscapes, crystal water, the abundance of hotels and bars attract more and more visitors each year. Now it is a popular, fashionable and, probably, noisy place.

To have a romantic mood one should visit Little Venice, a small waterfront district of Mykonos located nearby. The first of these houses were built in the middle of the 15th century and belonged to rich merchants and sailors. The name of the district let people suppose that it was founded by the Venetians. Two or three storey white medieval houses with bright wooden balconies hanging over the sea stand right at the waterfront. Little basement doors of these houses provided direct access to the sea and spacious underground storage areas led people to believe that the owners were secretly pirates or smugglers.

Now the houses have been converted into art galleries, shops, bars and cafes. This place offers a breathtaking view of the sea and many people gather there to watch the sunset.

A cosy bay of the southern coast of the island houses the fishing village of Ornos. Nowadays fishing does not bring a tangible income as it was in the past, so the village lives at the cost of tourism. Dozens of hotels and taverns in the streets of Ornos allow you to feel the authentic atmosphere of traditional Greece. And the beach of Ornos is one of the best on the island: in addition to turquoise blue waters and fine clean sand, one of its sections is well protected from winds which is quite unusual for Mykonos. At the same time, on the opposite part of the island the winds gain strength and this place is popular among surfers. 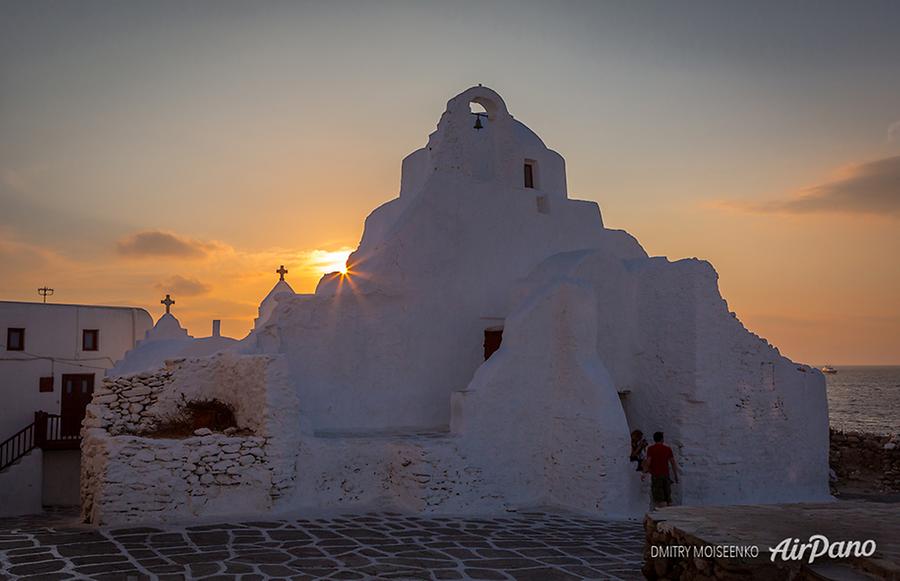 Locals refer to Ornos as "The Heaven on Earth" but this name suits the whole island of Mykonos as well, just have a look at it with your own eyes!