Hospitable Greeks helped us organize our trip to Santorini. We are very grateful to Yiannis Yiannakakis, head of Athens Walking Tours travel agency. In response to our "cry for help" in obtaining photography permits, he and his colleagues not only offered support in this tricky business and secured official permits for all requested locations, he also helped us with accommodations, transportation, and logistics, absorbing considerable portion of our expenses. Traveling the world, we have never met such generous hosts before.

There are white houses on white streets in white towns. There are blue church domes in the blue sky. There is a blue sea, mesmerizing your eyes.

There is no time, no rush. Eyes are resting, slowly moving along wonderful, as if carefully picked by an artist, details: the rhythm of blue-and-white stairs, a black cat napping on a white parapet. Everything has its special charm.

This is an amazing island, capable of filling up not only view finders of your camera, but your entire soul...

White... extremely white and blue... extremely blue. Did you guess the colors of Greek flag? It is warm in Greece, but not hot. It gets really hot only on the island of Nea Kameni, located in the center of a little Archipelago of five islands in Aegean Sea called Santorini - it is simply a sleeping volcano.

In the XII century Edis, the Arab geographer, named the largest island after a local church of Sant' Irene. Venetians secured the name Santorini, when they occupied this territory in XIII century... The name is still used through out the world, except for one nation - Greeks. They call their main (and the largest of five) island Thira. They are very sensitive about this name. Despite the fact that the island is a very popular tourist destination in Greece, you will not find an airport or a port of Santorini. There is simply no such place on Greek maps. Look for Thira, instead, on Greek maps and in travel guidebooks! 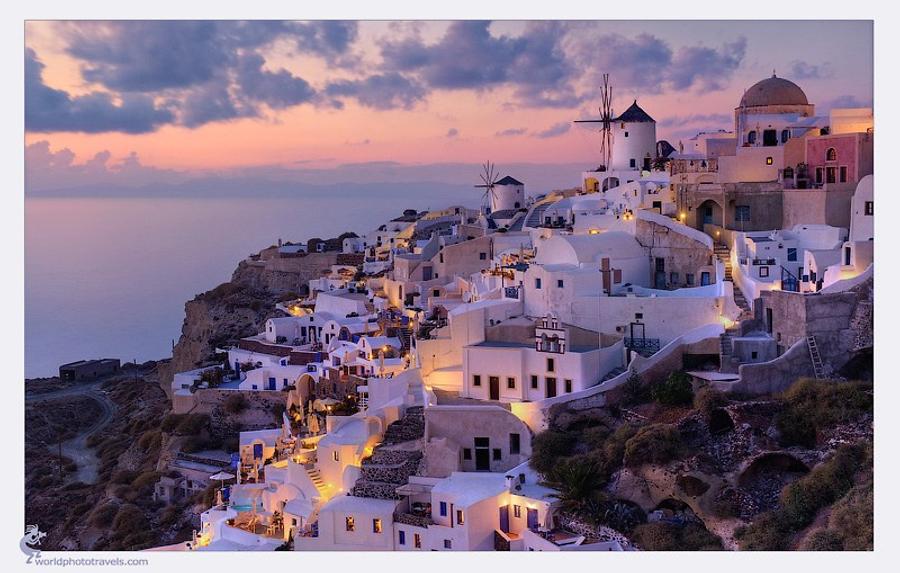 According to Greek mythology, Santorini was a handful of dirt that Sea God Triton gave to the Argonauts. They named it Kallisti, the most beautiful one. In reality, the Archipelago used to be a large island with a sleeping volcano in the middle. Seamen called it Strongili (the round one). At the end of the XV century the volcano suddenly woke up. Horrible eruption buried all local settlements (most of researchers, including Jacques-Yves Cousteau, believe that they were disappeared cities of Atlantis) under hot lava. Central part of the island fell into cavities opened by eruption, creating so-called "caldera" - a round crater with circular walls pointing to the center. The cataclysm caused a 100-meter tsunami wave that went on for 110 kilometers and reached the island of Crete. Tsunami was so powerful that it simply washed the famous Minoan civilization off the island. Continuous volcanic activity formed the modern shape of the Archipelago. On a map, Thira, the main island, resembles a sickle without a handle, surrounded by a smaller island of Tirassia on the West, and by two sleeping volcanoes in the center: Nea and Palea Kameni.

When you take a ferry to Thira from Athens or Crete, or go on a tour boat, look back - you will see what seems to be huge vertical red and black cliffs covered with white dust. This is the way Thira's little cities and villages, resting on a very top of steep hills, look from water.

The other, Eastern, side of the island has rolling hills and long beaches with black (or red, sometimes) volcanic sand. The vegetation on the most of the island is rather poor due to a dry climate. However, Thira is famous for its wineries (start thinking of local wine tasting!) and amazingly delicious miniature tomatoes. 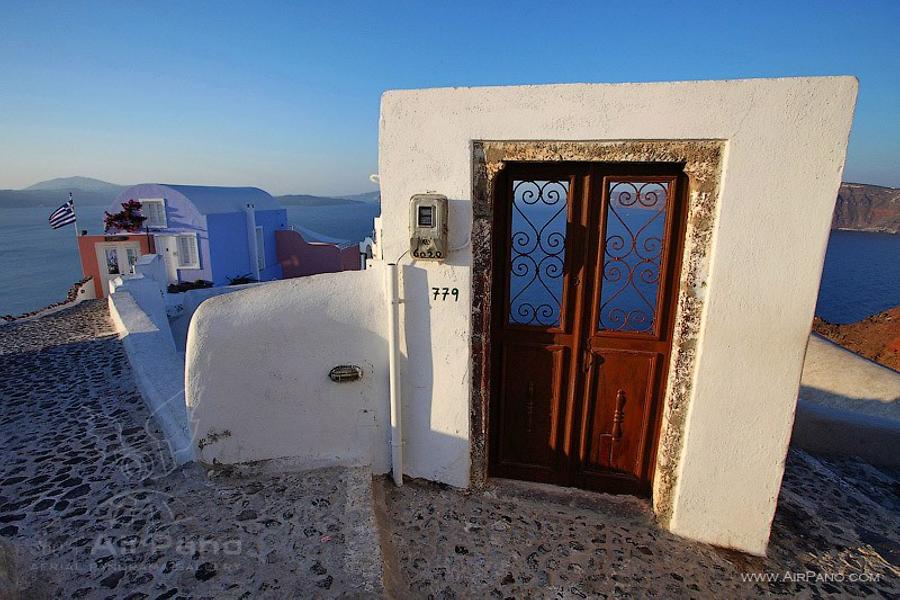 Why are the majority of buildings on the island painted white, and church domes - blue? There is a legend about that. When Turks occupied Thira (Barbarossa himself conquered the island in 1537!) it was forbidden to use national colors of Greece and to celebrate Greek holidays. However, the rebellious people started painting their buildings in colors of their national flag: white and blue! There are 350 churches on the island - plenty of room for a patriotic painter. Why this is a legend? Because actually the "white and blue" is a modern style used in Cycladic architecture in early 80s of the XX century.

Modern Santorini is a tourist Mecca for visitors from all over the world. During summer months over a dozen of cruise ships every day bring thousands and thousands of tourists to this not-so-large island. Streets are flooded with vacationers of all sorts and languages; restaurants are booked from early in the morning; dance clubs in Thira close only for a few hours after the sunrise; and at sunset all stairs and walkways are full of people with point-and-shoot cameras capturing the red sun disappearing behind the horizon. 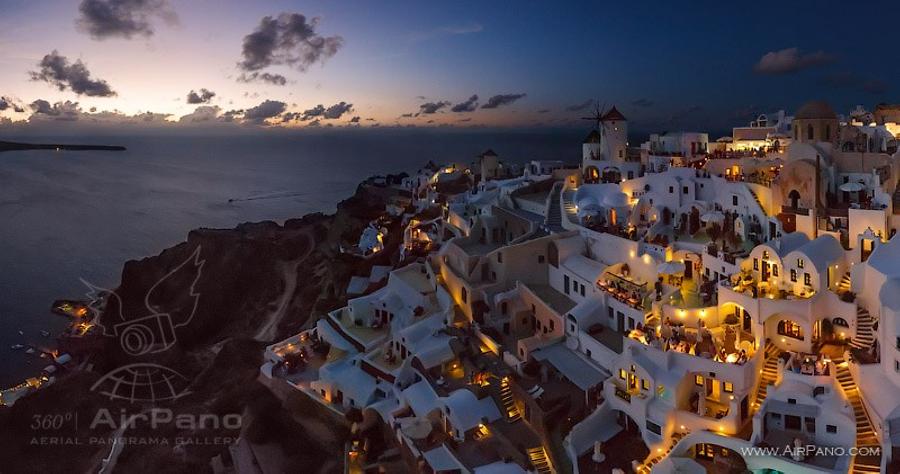 The towns of Oia and Fira are considered Pearls of Mediterranean. To be exact, they are places of pilgrimage for creative people, and first of all for photographers, designers, and artists. Their special artistic appeal comes from a unique location on the rim of a volcanic crater, the caldera. This location was picked for a stunning view and, secondly, as a good place to defend against pirates... This is why whole city blocks cascade down hill to the seashore, following natural curves of the landscape. Roofs of lower level houses often serve as balconies for upper levels, or sometimes, as sidewalks.

Another unique element of local architecture is vaulted arched ceilings. Unlike traditional "chopped" urban forms, soft round lines sooth and please the eye. Many houses, villas, and even hotels were built, or we better say dug, in the rocks directly. However, in spite of a weird appearance and "cave-like" interior, these buildings have all desired amenities and high level of comfort.

The most important feature of all - there are no cars in the cities. This is why one can see very cute donkeys, a symbol of Santorini, on the streets at all times. Donkeys are responsible for everything on the island: delivering goods to local stores, moving luggage, and taking out trash. So people must give way to the animals and watch their steps! 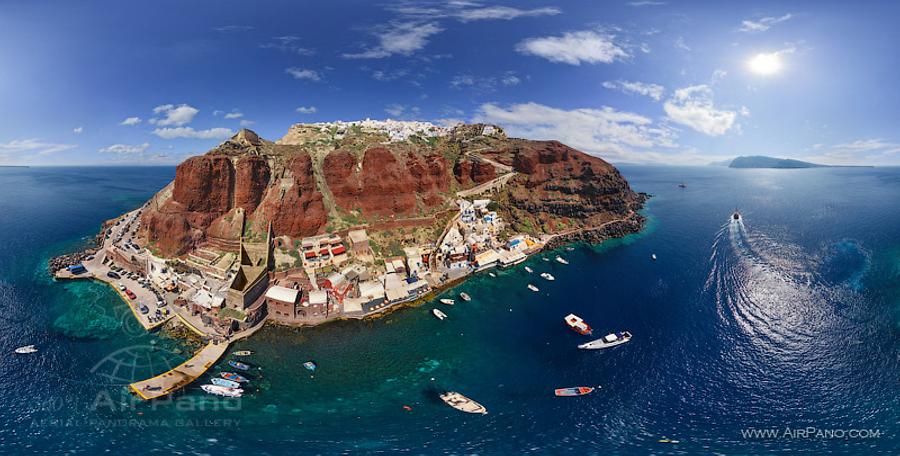 In those little towns, one never knows what is going to appear in front of him around the corner: a dome of a church, a bell tower, a little court yard with blooming geranium, a mythical mask on a wall, rusty of a salty ocean air window shutters, a door to nowhere, and a lazy orange cat, resting on banisters.

The town of Oia is a place for meditation, relaxation, and most beautiful sunsets in the world.

Taking pictures in September was very comfortable - sunsets were not too late, and sunrises were not too early. But it was hard to put a camera aside and simply relax on a porch of our villa, enjoying the view of sailboats and lazy cruise ships from a 300-meter high cliff...

Countless post cards and photo albums are dedicated to cats of Oia. And what can be more amusing than a donkey waving its ears to get rid of flies? Or a dog following departing ships with a pensive gaze? Every minute one is reminded that this is in the most beautiful city of Greece.

By the way, first modern "architects" of Oia were captains - sail boat owners - perhaps, this is why the town resembles a ship: steep stairs, low doorways, and narrow paths. One of UNESCO heritage buildings is actually called "Sea Captain's House." There is one more secret - why most of visitors come as a couple or prefer to spend a honeymoon in Oia. The legend says that if lovers write their names on red rocks near the town, they will always be in love with each other and will never get separated.