The bears of Berlin# 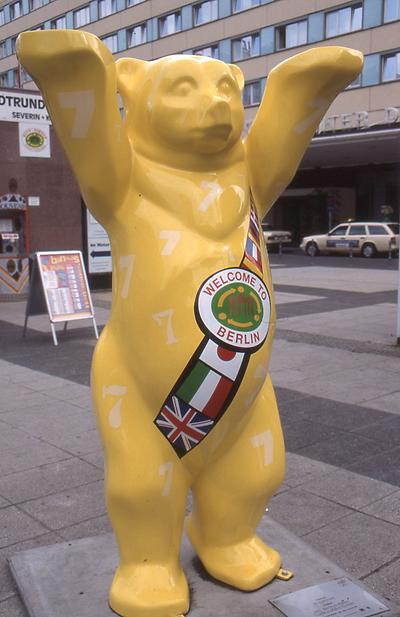 This and all photos of bears in Berlin are from the archive of the author called "Jontes Picture Flood"
Since 1280 the German capital Berlin has a bear in its city coat of arms.

So this is a "talking" coat of arms, because it establishes a linguistic connection between the town’s name and the emblem image.

One theory about its origin refers to Margrave Albrecht I., often called "the bear", founder of the Margraviate of Brandenburg.

Others, however, believe that the name Berlin has roots in the Slavonic word „berl-„ meaning "swamp". Anyway, the Bear is probably Germany‘s most famous city coat of arms and is reflected in many forms in the Berlin cityscape.

In the late 20th century the bear was also given a first name, Buddy, signifying something like "comrade" or „pal“ in American English. And as such, it also became the subject of one of these animal parades coming into fashion in Berlin of those days.

The Berlin Senate had life-size plastic bears produced in 2001, had them mounted on concrete pedestals, 350 of them distributed in prominent places throughout the city.

They were blank but were painted elaborately by artists and immediately became favorites of the locals as well as the tourists.

In front of stores they refer to the store at issue, or point to places of interest. They also add colorful accents to the streets of the big city, buffeted by traffic, and serve as an artificial counterpart to the blooming nature of quiet parks.

The sculptures are not alike, but pose in a variety of ways, some even stand on their head. Mostly, however, they stand on solid legs with their arms raised, as if to welcome somebody friendly.

This hardly means a deadly embrace, although a bear is capable of it. But the threatening gesture usually fades when one looks these hairy fellows straight in the eye.