Chateaux of the Loire Valley 1#

The ancient castles and palaces are one of the most significant features of France. Everyone has heard about Louvre: the royal palace in Paris, originally built as a castle and later turned into one of the greatest museums in the world; or the Château d'If — the former fortress which was the place of imprisonment of the legendary Count of Monte Cristo.

However, there are dozens of other similar but less known castles in France, and each one has its unique history and outstanding architecture. But the Châteaux of the Loire Valley are of special interest: the number of the castles their number is so huge that the whole 300-kilometers-long part of the valley stretching from Sully-sur-Loire to Chalonnes-sur-Loire, is included into the list of UNESCO World Heritage Sites.

The major part of the Loire castles was built in the Middle Ages but rebuilt during the Renaissance period, when the French kings took a fancy of this region and chose this place for their residences. During the First World War some of the castles were functioning as military hospitals. And during the Second World War the castles managed to survive, although they were located at the demarcation line, and now we can fully assess the grandeur of the Châteaux of the Loire Valley.

We shall begin our virtual trip with castles which destiny is related to female names. One of them is Château de Chenonceaux located near a small village having the same name in the Indre-et-Loire département of the Loire Valley. People usually call it "the Ladies' castle", and there is a reason for that. 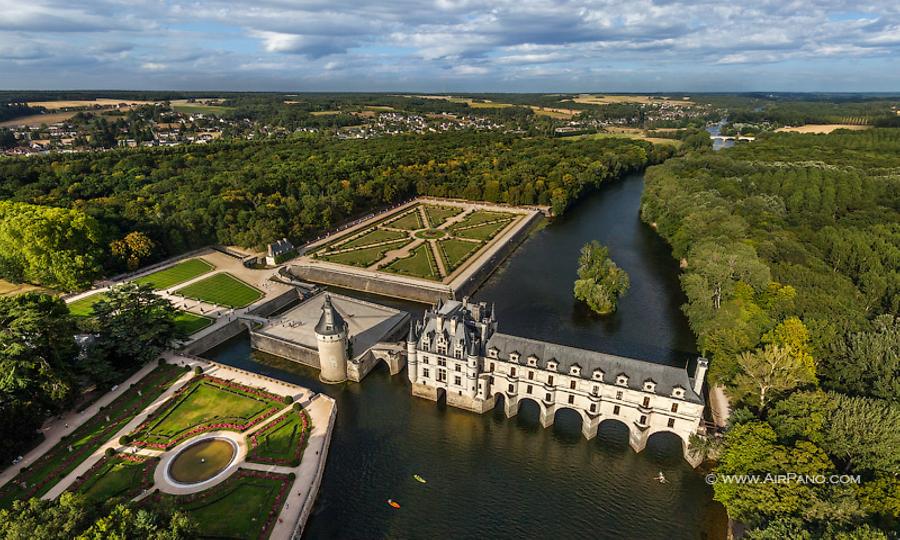 Since the 13th century a military fortress had been standing here, but two centuries later these lands were purchased by the royal chamberlain Thomas Bohier, who demolished the fortress to build an entirely new residence. But the process of building it was almost fully overseen by his wife, while Thomas himself was constantly absent due to his assignment.

In the middle of the 16th century the castle was seized from Bohier's son by King Francis I of France, who enjoyed visiting this château with his attendants. Among them were his son, the king to come Henry II, and an eminent noblewoman Diane de Poitiers.

The affair of Henry and Diane is one of the most known love stories in the world (in particular, it became the basis for the novel "The Two Dianas" by Alexander Dumas). They first met when Henry was six: a 25-year-old beauty kissed the boy and he decided to become her knight for ever and ever. Even having married Catherine de' Medici, Henry II did not forget his passion, and despite a 19-years difference in age, he continued to show his affection to Diane. Among numerous gifts given to her, there was the Château de Chenonceaux, regardless of all existed property laws. 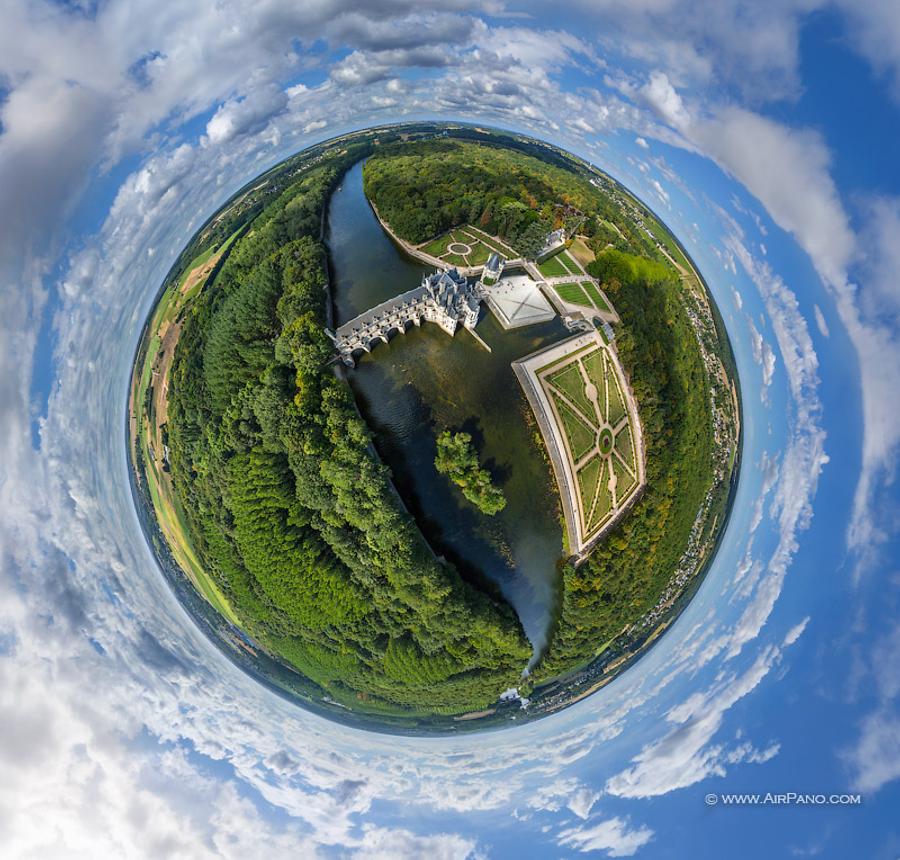 Diane turned out to be a good landlady: in 1551 she initiated renovation works, including the reorganisation of the park and fruit garden. By her order the depth of the river Cher was measured and the arched bridge to the opposite bank was built according to the plan of the architect Philibert de l'Orme.

Soon after the death of King Henry II, Diane was forced to return the castle to his wife. The following owner after the death of Catherine de' Medici was Louise de Lorraine-Vaudémont, the wife of King Henry III. This lady is widely known as "The White Queen": at an early age she became a widow, and over a period of twelve years she had been wearing white mourning clothes, according to an ancient tradition. After her death the château went to Françoise de Mercœur, wife of César de Vendôme, who was an illegitimate child of the King. Since that time the Kings of France had left the Chenonceaux.

In 1733 the castle was sold to a wealthy squire Claude Dupin. His wife, known for being an admirer of arts, opened a literary salon at the Chenonceaux. A century later, the castle was acquired by Madame Pelouze, who commissioned restoration works in order to return the initial look to the castle. Nowadays Chenonceaux belongs to the Menier family, who purchased it in the end of the 19th century. The castle is entirely restored and now open for tourists.

The Château de Cheverny, located at the commune bearing the same name in the Sologne region, was given by Henry II to Diane de Poitiers too, but comparing to Chenonceaux, it has not remained in its initial form. The castle that we can presently see was entirely rebuilt in the first half of the 17th century in a late Renaissance style. The castle resembles the Luxembourg Palace in Paris, because the project was entrusted to Jacques Bougier — an apprentice of Salomon de Brosse, who guided the creation of the residence in Paris.

In the beginning of the 17th century a Shakespeare-worthy drama took place in the Château de Cheverny. Henri Hurault, a then-owner of the castle, caught his wife with her lover. After murdering the lover, Henri forced his wife to choose death by poison or by blade; she chose a bottle of poison. King Henry IV, who reigned at that time, did not approve that kind of punishment and forced him to stay inside the castle, without possibility to come out to the court. Staying inside, Henri managed to marry again, and a new mistress of the castle, Marguerite, took care of the Cheverny. She initiated the restoration works and expansion of the castle. By 1650 the interiors of the castle had been completed by Marquise de la Morinière, daughter of Marguerite and Henri.

In 1802 the circumstances forced the Hurault family to sell the property, but soon after the Napoleonic Wars they brought it back. In 1914 the owners of Cheverny opened it to the public, ones of the first in France to do so.

The history of the Château de Villandry, lying 15 kilometres away from the city of Tours, does not feature such violent passions, but this palace will provide a romantic atmosphere better than other castles.

In the 12th century these lands were the fortress of Colombiers, but four centuries later its new owner, Jean Le Breton, France's Secretary of State under King Francis I, decided to build a new magnificent castle that would outstand other medieval fortresses. The most ancient constructions of Colombiers, with the only exception of the main tower (donjon), were destroyed and in 1536 the building of a new castle in Renaissance style began.

Thanks to one of the following owners, Jerome Bonaparte, the brother of Napoleon, the castle became a gorgeous château, as it had to correspond the emperor's tastes. But a larger contribution was made by the Carvallo family, who purchased the castle in the beginning of the 20th century. In order to return the initial look to the Villandry, they rebuilt the arcades and recreated the gardens.

The garden complex is arranged at three levels, each one raising above the previous. The lower terrace is a kitchen garden, the upper one is occupied by fruit trees, and in between there is the "Love Garden", visually continuing the first level. Flowers in four beds lying close to château are cut to form love allegories. Ball masks and hearts separated by flames symbolize passionate love; fans and yellow colours symbolize fickleness of the sentiments and unfaithfulness; hearts pierced by arrows remind of tenderness and sensibility; and finally, tragic love is illustrated by blades of daggers. In summer, the flowers turn red to symbolize the bloodshed in the duels.

Colourful flowerbeds, fountains, ponds, labyrinthic lanes and more — the gardens of Villandry are the great example of the French landscape art. In order to fully appreciate the design of the creators you have to look at it from above, and AirPano panoramas are the best for this purpose.

But our virtual trip along the Loire Valley is not over: next time you will find out what is the relation between the castles of Loire and the famous Leonardo da Vinci.

13 Panoramas of Chateaux of the Loire Valley 1