Developing methods for detecting remnants of nuclear tests using seismic waves in the underground is the goal of an interdisciplinary WWTF-funded research project. Mathematician Ilaria Perugia explains what is possible with High Performance Computing and how the project inspires basic research.# 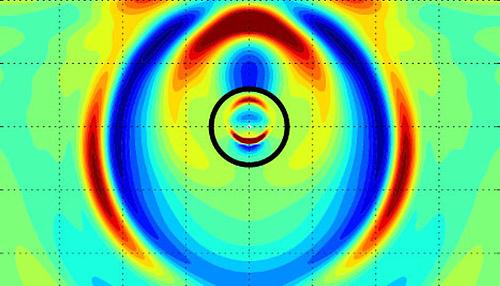 Ilaria Perugia and her team try to find patterns in computer simulations of waves in order to develop detection methods for underground cavities – like such that remain from nuclear tests.
Photo: Ilaria Perugia

And then there was an explosion, 500 meters below the surface of the earth. Nothing can be seen on the surface, but an underground cavity remains – as a remnant of a nuclear test – unknown to the public. In order to monitor unauthorised nuclear tests for organisations like the Comprehensive Nuclear-Test-Ban Treaty Organization (CTBTO), they need methods to detect such cavities. That is where mathematics and geophysics come into play.

"Elastic wave interaction with underground cavities" was the first project that Ilaria Perugia from the Faculty of Mathematics applied for after she moved to Vienna, and that got approved by the WWTF. Together with Götz Bokelmann from the Department of Meteorology and Geophysics she set up a project to find out how one can measure elastic wave interference by an underground cavity. More specifically, they want to provide insight on how to detect such cavities by looking at elastic waves that are recorded at the surface.

"After an explosion at a certain depth, you have no obvious signature, no crater, nothing to verify the conduct of an underground nuclear test," explains mathematician Sofi Esterhazy, one of two postdoc researchers working on the project. To help the development of detection methods, Perugia and her team want to find out if waves – for instance sent out from a receiver placed above the ground – interact with cavities in a measureable way.

To test the methods, a challenge is to get appropriate data. Although there are cavities from underground nuclear tests in some countries, the researchers have no access to them. To compensate for this fact, they run their own numerical simulations at the Vienna Scientific Cluster. But these simulations only show an idealised case of a scattered wave interacting with a simplified cavity model.

To observe interaction effects, Felix M. Schneider, the other postdoc researcher working in the project from the Department of Meteorology and Geophysics, compares the numerical model to real data: "There are some sites, where we find similar conditions, for example in a natural cave or a tunnel." Schneider is looking for patterns in real data that are also visible in their simulations.

While it is possible to run simulations, it is still difficult to model realistic conditions. A challenge for Esterhazy is the treatment of artificial boundaries. "The question is how to make the code understand that the earth doesn't really end at the end of the simulation box and that the waves should not be reflected," explains Esterhazy. 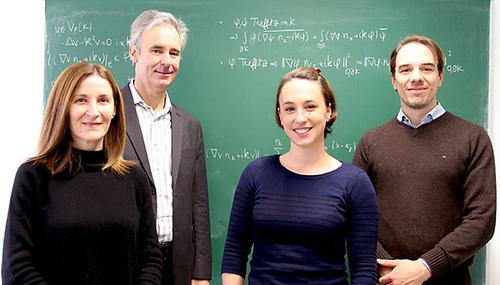 The interdisciplinary team of researchers from the left to the right: project supervisors Ilaria Perugia and Götz Bokelmann with their post-doc researchers Sofi Esterhazy who runs the simulations and Felix M. Schneider who compares them to real-life data.
Photo: University of Vienna

To solve such complex elastic wave equations, Esterhazy uses a numerical method called spectral element method, which makes the process more efficient but nevertheless demanding. "Whether you want to represent waves in the domain of frequencies or in the domain of time, both is computationally very challenging," Perugia explains.

Right now, one simulation takes Esterhazy 15 hours on 500 processor cores – a time span which has improved a lot since the beginning of the project. Instead of using a fine mesh everywhere, the scientists use a finer mesh only where the waves have large variations or the geometry needs to be better approximated.

From the first steps...#

One big advantage of the project is its interdisciplinary approach. To really work together, the researchers first had to get to know their differences. "For geophysicists, data isn't something I can produce – they differentiate between synthetic data and real data, so my simulations wouldn't produce real data," Esterhazy explains laughing. "The first step of the project was to set up a common language, which was extremely interesting," Perugia says about the early meetings.

Although the team did manage to find interaction effects, they still need to shed light on a lot of things. "It is not clear whether the resonance effects we were able to model can actually be measured in real life because they are relatively weak," explains Schneider. One other effect they are currently studying is the influence on the speed of a surface wave by the presence of a cavity.

Aside from the results, which will be published in various publications, working on this project "inspired a lot of research," Perugia says. "Seeing the problems in simulating time dependent wave equations correctly, encouraged me to look at some other paradigms, for instance, the concept of space-time." According to her, this would provide the groundwork for further methodical developments in wave propagation research, so that one day "a receiver placed on the ground is able to identify patterns of seismic waves that represent a cavity." (pp)

The project "Elastic wave interaction with underground cavities", supervised by Univ.-Prof. Ilaria Perugia, PhD and Univ.-Prof. Dr. Götz Bokelmann and assisted by Dr. tech. Mag. rer. nat. Sofi Esterhazy and Dipl.-Phys. Dr. rer. nat. Felix M. Schneider is funded by the WWTF in the context of the "Mathematics and … Call 2014" and runs from January 2015 until December 2018.