When giving talks, I have asked frequently the audience „ What do you think is the most important agent of change in the last century? I have a few proposals I would like to have your opinion on. My first is: COMPUTERS. Raise your hand if you think this is the development that has influenced us/society the most.”

In each case 70% or more hands went up. I usually smiled and said: “Thanks for your opinion. Forgive me if I do not share it, I think that telecommunication has changed our world much more dramatically.”

I would then explain that without global telecommunication we could not have gigantic companies; that those companies often make decisions that are not suitable for a certain locality; that radio and television have changed what we want, our society and our morals. That globalization would not exist without telecommunication. That wars would not occur without it. That world-wide superpowers only exist because of it. Or the other way around: An isolated computer might be quite helpful for some calculations, for payroll organization of a company, etc., but its real influence is not because of its power, but because it is networked.

Hints why telecommunication makes such a change#

It is intriguing to look at the development of telecommunication. Consider the famous battle in the Teutoburger forest in 9 B.C.: The illiterate Germanic (Teutonic) tribes (yes, illiterate, they had no written language yet) under Arminius defeated the large army of the Roman general Varus. 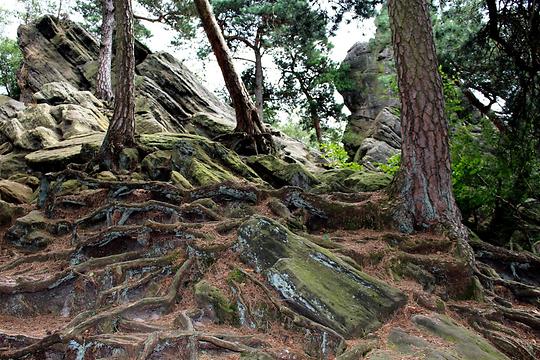 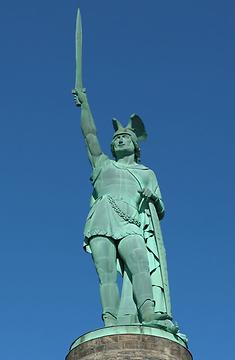 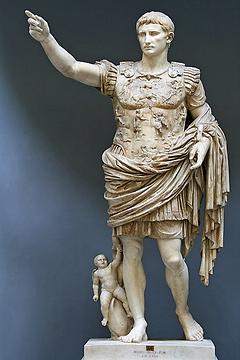 Emperor Augustus in Rome heard of the defeat only months later what he said in shock became famous: “Varus, Varus, give me back my legion of soldiers.” What I want to explain with this example is that central powers did not have an influence on local actions for a long time in human history because no fast communication was possible over a long distance. And this was often good as I believe another example shows, the battle of Stalingrad (23 August 1942 to 2 February 1943):

The German offensive to capture Stalingrad began in August 1942, using the 6th Army and elements of the 4th Panzer Army. The attack was supported by intensive Luftwaffe bombing that reduced much of the city to rubble. By mid-November 1942, the Germans had pushed the Soviet defenders back at great cost into narrow zones along the west bank of the Volga River. 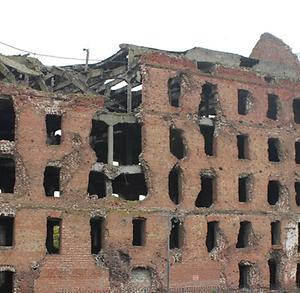 The forces on the flanks were overrun and the 6th Army was cut off and surrounded in the Stalingrad area. General Friedrich Paulus, commander of the German forces knew that the only saving move would be to break out and to unite with other parts of the army to the South. However, Adolf Hitler ordered that the army stay in Stalingrad and make no attempt to break out.

Paulus has later been accused to follow orders from Hitler, despite that he knew the local situation, Hitler did not.

Heavy fighting continued for another two months. By the beginning of February 1943 the remaining units of the 6th Army surrendered and 110.000 German soldiers became prisoners of war, only 6.000 survived.

In total some 700.000 thousand person died in Stalingrad, because someone far away made wrong decisions and could them as commands by telecommunication.

The signal hills of Claude Chappe#

It is not a coincidence that both examples are from the field of military, since quite a bit of telecommunication was developed because of military actions. One of the earliest such developments were the signal hills in Europe.

Mechanische Telegraphie. Gemeinfrei
During the Napoleonic wars Napoleon was worried that news from remote areas could take a long time to reach him.

Neither courier-rides nor carrier-pigeons were fast enough. Thus, he charged the French engineer, Claude Chappe, to develop the technical “semaphore system” that he had demonstrated in 1792 system into a country wide system.

It eventually spanned all of France and was the first practical telecommunications system of the industrial age.

The idea of the system was to place mechanical rigs on hills with movable rods, positions of the rod corresponding to letters.

Those positions could be seen using binoculars from the next hill (10 to 25 km away), repeated there, etc.

Thus, a message could be sent over a long distance letter by letter: The speed is said to have been about one bit/second! The first messages were successfully sent between Paris and Lille.

The system was used only two years later to inform Paris within minutes that the Belgium border town Condé-sur-l'Escaut some 200 km away was captured by Austrian troops. Carrier pigeons (if available) would have required at least two hours.

Signal hills were built all over the world.

If today you find, even in fairly remote corners of the world, a hill called signal-hill you can bet it was used once as one station in the mechanical telegraph system explained or of a wireless telegraphic station at a later stage. This is e.g. true even of the signal hill in Alice Springs in the center of Australia, or of the one in St. John’s, Newfoundland.

Other non-electric ways of communication#

Although the signal hills of Claude Chappe were the most successful non-electric communication tools (some 500 were built just in France!) it must not be overlooked that the idea to use other signals to communicate messages have a much longer history. Even in ancient Greek simple devices existed, North American Indians used smoke signals, ships communicated using a “flag-alphabet”, and even acoustic signals were used for communication: drums in many parts of Africa, and jodeling (yes, this is not just music, but was used also for communication) in both central Africa and the Alps, etc. Even tubes, up to 4 km where tested to just talk into them to carry the sound. Remnants of this can still be found on some boats, where there is such a tube connecting the captain with the machinists. 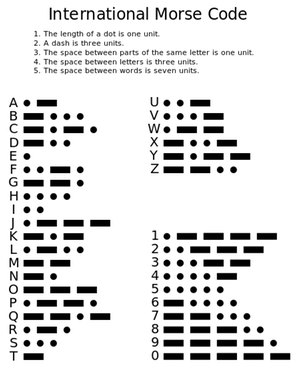 MOrsecode. Gemeinfrei
The technology of such mechanical systems was replaced completely within decades after the introduction of fairly robust (wire-based) electric telegraphs. Experiments on both sides of the Atlantic had started around 1800 and started to create practical interest after 1830. The first telegram using Morse code was sent by Morse in 1838 over a distance of 3 km, in 1844 already over a distance of 71 km.

It is curious that the introduction of electric telegraphs had, initially, fierce opponents claiming that they were too vulnerable (by cutting the electrical wires).

The first successful transatlantic cable was already completed in 1866, UK established a connection with India in 1870 and with Australia (Darwin) in 1872. F. Braun and G. Marconi were awarded the Physics Nobel Prize 1909 for wireless telegraphy. Marconi is best known for the first transatlantic wireless telegraphic communication between Cornwall and St. John’s in Newfoundland in 1901: That the transmission worked despite Earth’s curvature came as surprise, since the (radio) signal-reflecting Heavyside layer had not been proven to exist at that time. Despite predictions of this layer of ionized gases around 100 km above ground its existence was only proven in 1924 by E.V. Appleton, who later received the Physics Nobel price for this discovery. The electric telegraph increased telecommunication facilities tremendously, and was particularly heavily used in connection with railroad systems. However, towards the end of the 19 th century a rival appeared on the scene: the telephone. 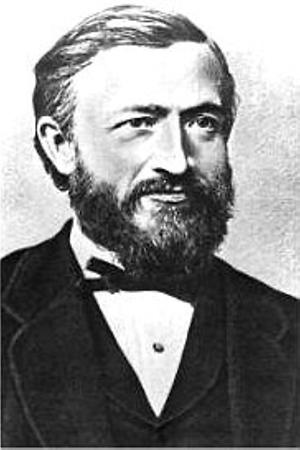 Johann Phillip Reis. Gemeinfrei
Credit for the invention of the electric telephone is disputed. Several inventors pioneered experimental work on voice transmission over a wire and improved on each other's ideas. Charles Bourseul, Antonio Meucci, Johann Philipp Reis, Alexander Graham Bell, and Elisha Gray, amongst others, have all been credited with the invention of the telephone. Alexander Graham Bell was the first to be awarded a patent for the electric telephone by the United States Patent and Trademark Office 1876, a decisive cornerstone. The patent has been quite contentious, since it is based on a device built by Antonio Meucci, an Italian theater technician working in New York. Illness and lack of money prevented him to patent his device, and Graham Bell took over. In the German speaking world it is not Graham Bell but Johann Phillip Reiss who is considered the inventor of the telephone. Indeed he showed a first working model to the Physics Association in Frankfurt in 1861 and built a number of demonstration models. One of them was purchased by Graham Bell and helped him to an unknown degree together with Meucci’s work to get his US patent.

There is a funny anecdote about how the leading US telegraph company, The Western Union Company, reacted to the emergence of the phone. A manager of the company has been quoted as saying in 1882: “The telephone is not reliable enough for serious applications. It is a toy that will disappear again soon.” Indeed, even around 1920 the opinion that telephony would have some applications in industry, but would not spread on a large scale to private homes was widespread. The belief was based on the “chicken and egg” problem: “Why should I have a phone at home? None of my friends or neighbors have one, so whom should I call?”

Some of the doubters in telephony were reassured in their belief when around 1930 the number of telephone subscribers dropped. However, this was of course just a consequence of the Economic crisis after the New York stock market crash in 1930.

The invention of the transistor in 1947 dramatically changed the technology used in telephone systems and in the long-distance transmission networks. With the development of electronic switching systems in the 1960s, telephony gradually evolved towards digital telephony. The development of digital data communications method, such as the protocols used for the Internet, it became possible to digitize voice and transmit it as real-time data across computer networks, giving rise to the field of Internet Protocol (IP) telephony, also known as voice over Internet Protocol (VoIP).

Mobile telephony is starting to replace fixed connections: By 2018 almost 5 billion mobile phones will be in use, by a world population of 7,6 billion.

Mobile telephony need not be terrestrial #

Mostly cell-phone (terrestrial) technology is used. However, even before 2000 Systems like Iridium or Global-Star were introduced, where connection between users is via geo-stationary or low flying satellites. The potential advantage is truly global communication also with arbitrarily remote locations. However, devices are usually heavier and costs are much higher, making satellite telephony only interesting for certain applications like expeditions into remote areas or for military purposes.

A warning at the end# 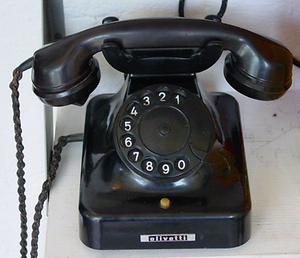 Klassisches von lokaler Stromversorgung unabhängiges Telefon. Gemeinfrei
For us, high quality communication facilities are clearly needed, and all improvements seem to be welcome.

However, the trend to concentrate on single technology is quite dangerous.

Not many people are aware of the fact that a good old telephone connected by a fixed line will keep working, even if local electricity, even electricity in the whole country, is suddnely not available.

Reason is, those telephone are fed by batteries from the server provider that are (at least for some time) independent of the supply of alternating current.

However, if electricity fails, so do all mobile phones immediately.

Hence it would make sense if government provide redundancy (alternatives) for emergencies.