Shonali Pachauri, IIASA Achive
Switching from using fuelwood to liquefied petroleum gas (LPG) for cooking would provide modest climate benefits, but the extent of these depend on whether the wood is renewably sourced, and if the short-lived emissions from burning wood are taken into account, according to a new analysis focused on India.

About 3 billion people around the world cook with polluting and inefficient solid fuels like fuelwood, resulting in 4 million premature deaths annually. Several governments, including India’s, have implemented policies that encourage people to switch to cooking with modern fuels like liquefied petroleum gas (LPG). While such policies certainly save lives, the implications for the climate are less well understood.

In India almost 37 million households have switched to cooking with LPG between 2001 and 2011. The climate impacts of this are positive if two key factors are accounted for, according to the new study published today in the journal Environmental Research Letters. These are emissions of short-lived, potent greenhouse gases like black carbon, and the fact that not all fuelwood is renewably sourced.

“Because LPG is a fossil fuel and wood can be renewable, provided its consumption does not exceed regrowth, the emissions impact of this transition have been unclear. But the extent to which fuelwood for cooking is non-renewably sourced matters significantly for the emissions associated with its use,” says Devyani Singh, the study’s lead author. Singh is a doctoral candidate at the University of British Columbia in Canada, and started the work as part of the IIASA Young Scientist Summer Program (YSSP). “Even if we assume all fuelwood is renewable and count only the set of greenhouse gases included in the Kyoto Protocol, which excludes short-lived emissions like black carbon, we find no net climate impact of this transition. This is because cooking with LPG is much more efficient, and burning wood emits methane—also a greenhouse gas,” says Singh.

The estimated net emissions impact of these changes in fuel consumption were found to vary significantly depending on assumptions of fuelwood renewability and the set of emissions considered. The study estimated that net emissions were reduced by as much as 6.73 metric tons of CO2 equivalent (MtCO2e) if both longer- and shorter-lived emissions (such as black carbon, organic carbon, and sulphur dioxide) were considered and it was assumed, conservatively, that 30% of fuelwood was non-renewably sourced. If only emissions included under the Kyoto Protocol were counted, the net reduction was estimated to be 3.1 MtCO2e when 30% of fuelwood was assumed non-renewable, and near zero if all of it was assumed to be renewable. 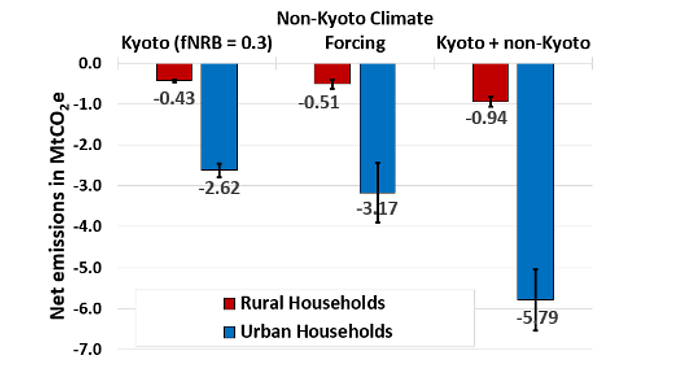 Change in net emissions considering the cases in rural and urban households of (a) only Kyoto gases and assuming that 30% of fuelwood was non-renewably sourced, (b) other short-lived climate pollutants (such as black carbon, organic carbon, and sulphur dioxide), and (c) combined Kyoto and non-Kyoto greenhouse gases. Error bars depict uncertainty in emissions ranges due to emission factors utilized.

“Accounting for the short-lived emissions from burning fuelwood is important—many of these are potent climate-warmers and they are also immediately hazardous to health. Thus, better household emissions accounting can have positive outcomes for the climate and people’s lives,” explains IIASA researcher Shonali Pachauri, who worked on the study and supervised Singh during the YSSP.