In the Pacific Ocean, there is the marvellous archipelago of Palau consisting of 250 small and 8 larger coral islands. This atoll is surrounded by "walls" dropping off abruptly to great depths, while in the middle of it, there is a shallow lagoon. This exotic corner of the world attracts amateurs of nature, picturesque seascapes and unforgettable dives. 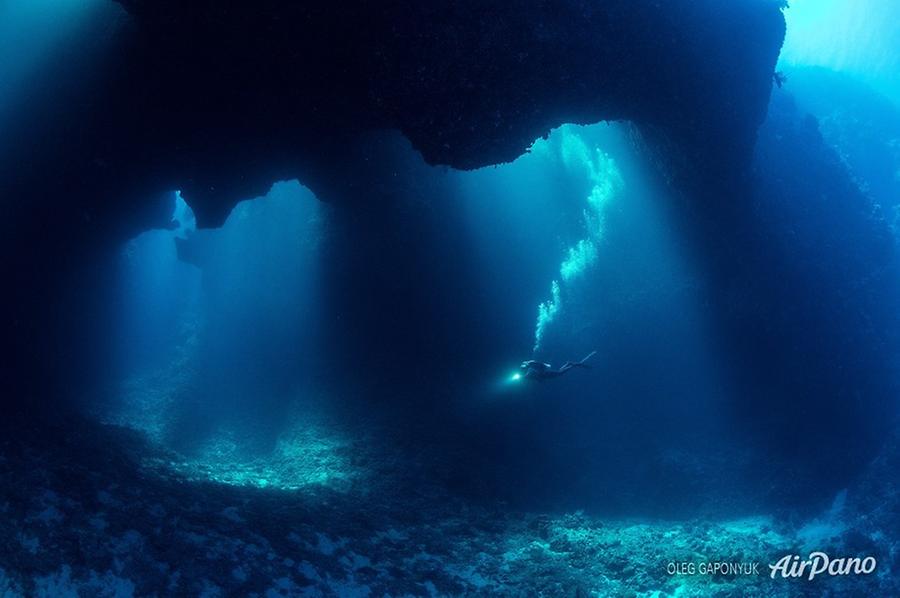 Blue Holes, Palau
© AirPano
One of the most iconic dive sites in Palau is the Blue Corner, an underwater plateau located on the outside of the atoll. It runs with its corner out to sea, thus receiving its name: "Blue Corner". 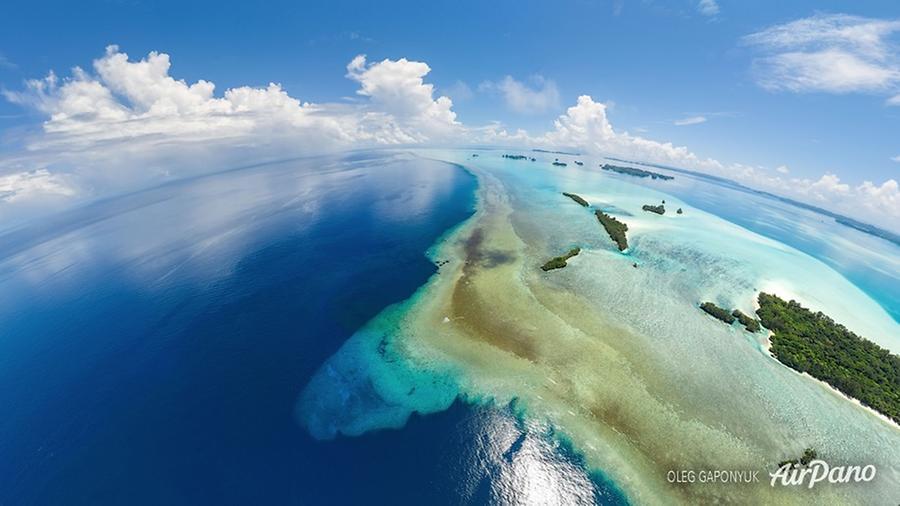 Blue Holes, Palau
© AirPano
This site is adjoined by the reef named "Blue Holes". Four vertical wells with a diameter of approximately 10 meters merge into one spacious cave with two exits at a depth of 35 meters. This unique submarine terrain formed millions of years ago as a result of the erosion when the sea level was lower than now. 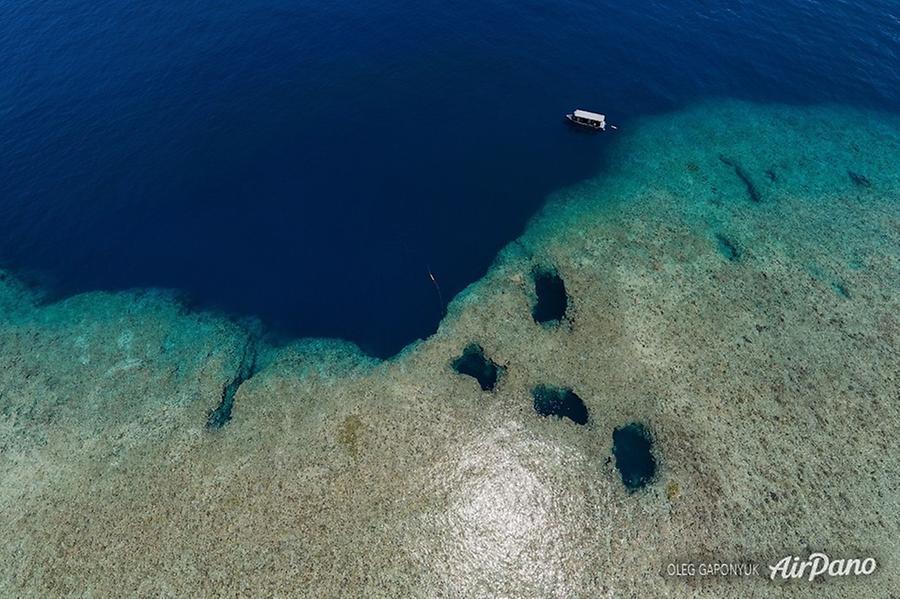 Blue Holes, Palau
© AirPano
The walls of the cave are covered with rows of corals. They are known as soft corals (Alcyonacea) and feature a diversity of forms and colours. Dancing sun rays penetrate the vast amounts of water, giving the space a magical blue glow. Depending on the perspective and time of the day, the shades of blue can vary! The underwater scene is absolutely miraculous, making the process of taking pictures even more remarkable.

Blue Holes, Palau
© AirPano
Dives are possible all year round: the average water temperature ranges from +26 to +29 °C (78-84F), the visibility can be up to 30-50 meters. Strong currents are common to these places, making it possible to dive into one of the wells of the Blue Holes and then be found near the Blue Corner. 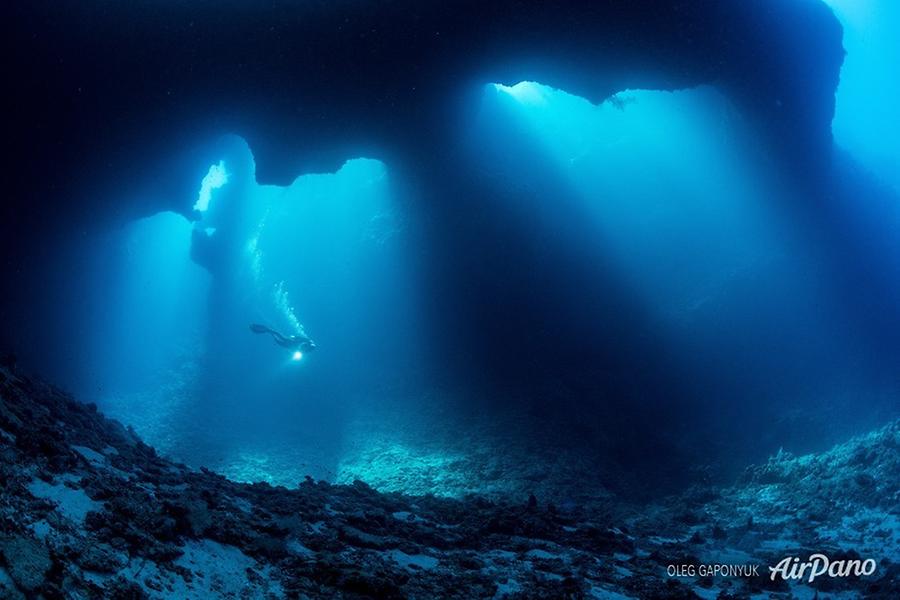 Blue Holes, Palau
© AirPano
Another remarkable feature of this reef is the Temple of Doom, a minor cave. This solemn name is probably connected to the fact that a lot of marine inhabitants found their resting place here. The bottom is covered with their bones; the most striking remnant is the skeleton of a large turtle. 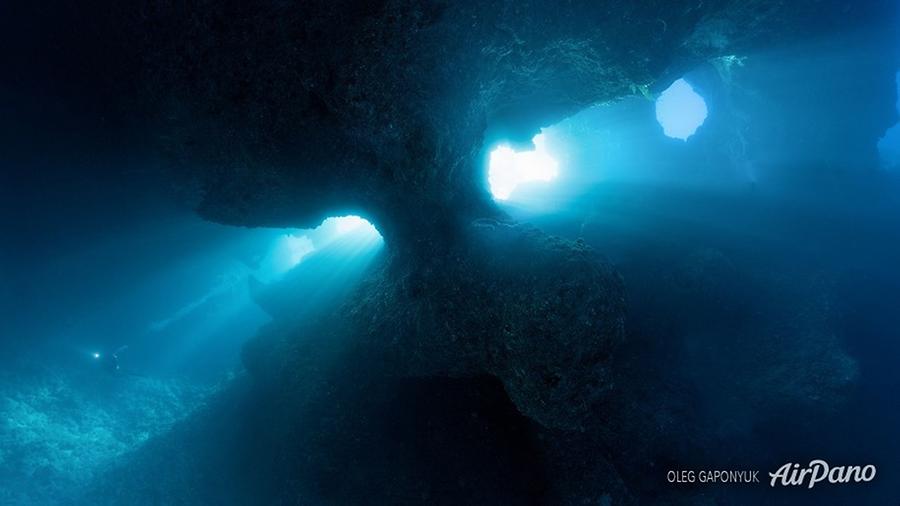 Blue Holes, Palau
© AirPano
One small entrance leads into a huge room of the Temple of Doom at a depth of around 25 meters inside the reef of Blue Holes. This kind of dive is considered quite challenging: an untrained person can easily get lost here. Only certified divers having special equipment and training are allowed to enter this cave. But some guides with good knowledge of this cave manage to bring ordinary divers to the Temple of Doom, too. 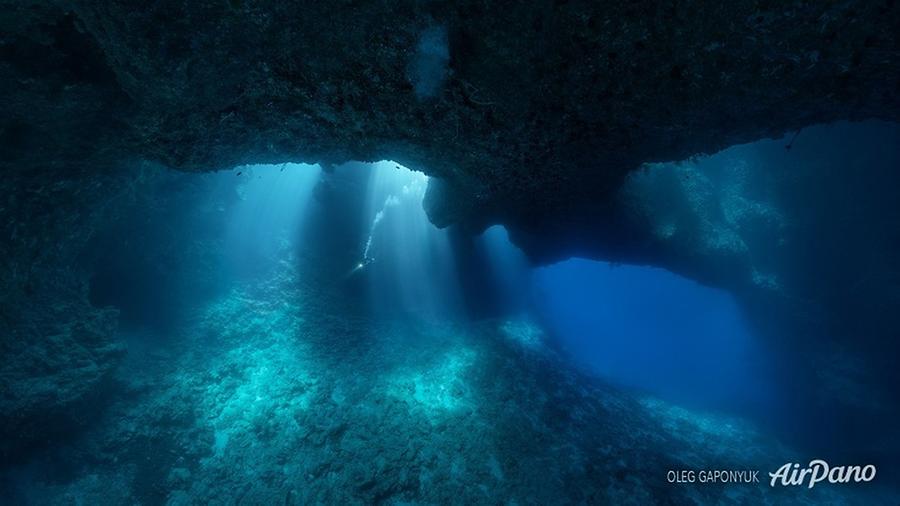 Blue Holes, Palau
© AirPano
AirPano panoramas will allow you to "dive" to these unusual sites even without any special skills!