Halong Bay (or Ha Long Bay) in Vietnam is one of the most beautiful and breathtaking places on the planet. In 1994 it was added to the list of UNESCO Heritage Sites. In 2011 the magnificent landmark of Vietnam was declared one of the "New Seven Natural Wonders of The World" beating serious "competitors" like Vesuvius Volcano in Italy, Great Barrier Reef in Australia, and even Baikal, the deepest lake in the world.

Local people have a very colorful story about creation of the bay. It is told that once upon a time, when ancestors fought with the Chinese, Gods sent dragons to help Vietnamese warriors. Trying to make a barrier, these fearsome creatures spitted precious stones that turned into islands. These islands created a wall that protected Vietnamese people from their aggressors. Dragons liked the rocky islands and decided to leave them behind after the war. Vietnamese named the place, where Mother Dragon landed, Ha-Long, which means "a place where the dragon descended into the sea".

Almost all islands of Halong Bay are rocky, and there is a countless number of caves and grottos of all sizes and shapes, filled with small waterfalls, stalactites and stalagmites. Some of the caves became a tourist attraction. Lit up with colorful lights, they look like fairy tale underground castles.

This peculiar shape of the mountains is caused by rainwater working its way through the limestone. Year after year heavy tropical rains washed out limestone, carving magical shapes and creating caves and grottos. Geologists call this phenomenon a tower karst. There are other tower karst formations around the world, such as in Madagascar and in China near Guilin city. However, unlike any other place, land formations of Halong Bay are standing in the water, and ocean waves continue carving the shoreline, deepening caves, and changing face of cliffs and grottos. 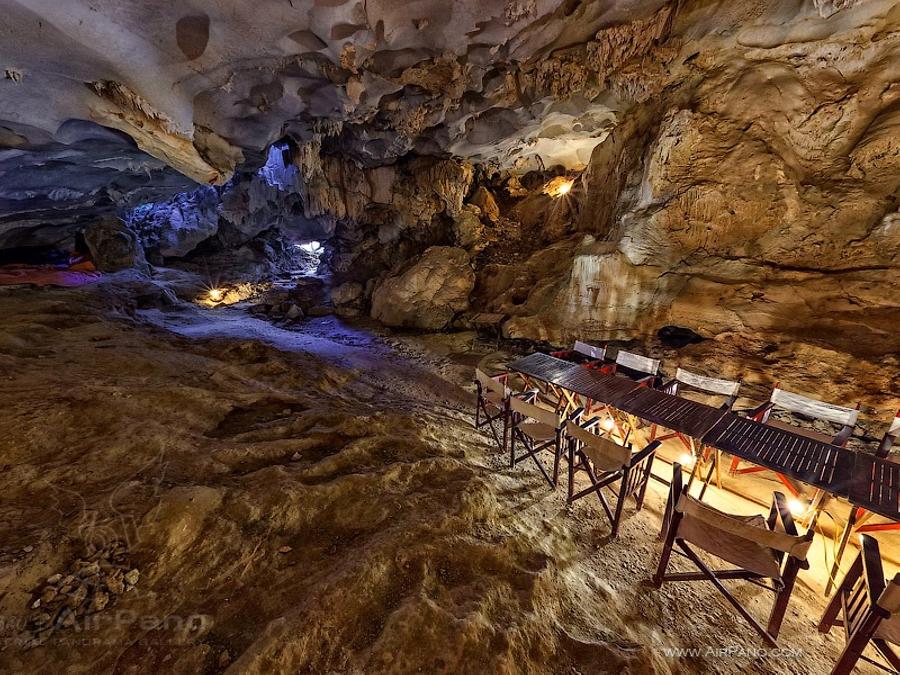 Hang Dau Go cave is one of the most famous sites of Halong Bay. Exactly 90 steps make a stairway to the cave entrance, where one can find numerous rocks of most peculiar shapes. A narrow wall divides the cave, creating 2 chambers. At the end of the cave, there is a well with a drinking water surrounded by ancient walls. Khai Din, the penult emperor of Vietnam, visited this place in 1917 and left his autograph on one of the walls.

Another cave called Kuang Han sets a new record in depth — it is 1300 meters deep. No wonder that it is called "the tunnel cave"...

One of the grottos is famous for its acoustic phenomenon: when the wind is blowing through numerous stalactites and stalagmites, one can hear distant drums from the inside of the cave. What if it's the echo of the ancient war between Chinese, Vietnamese and the dragons?

Stanislav Sedov will tell you a few words about the photo shoot.

It is impossible to photograph Halong Bay from the shore. This is why my colleague Dima hired a boat tour in advance. One of my childhood dreams was to sail away in a junk, so here we were — making my dream come true.

There are several travel agencies who offer boat tours in the bay. Halong Bay and the islands are "privatized" by these companies. Depending on the length of your trip (one or more nights) and a boat company of your choice, you end up going to different parts of the bay. 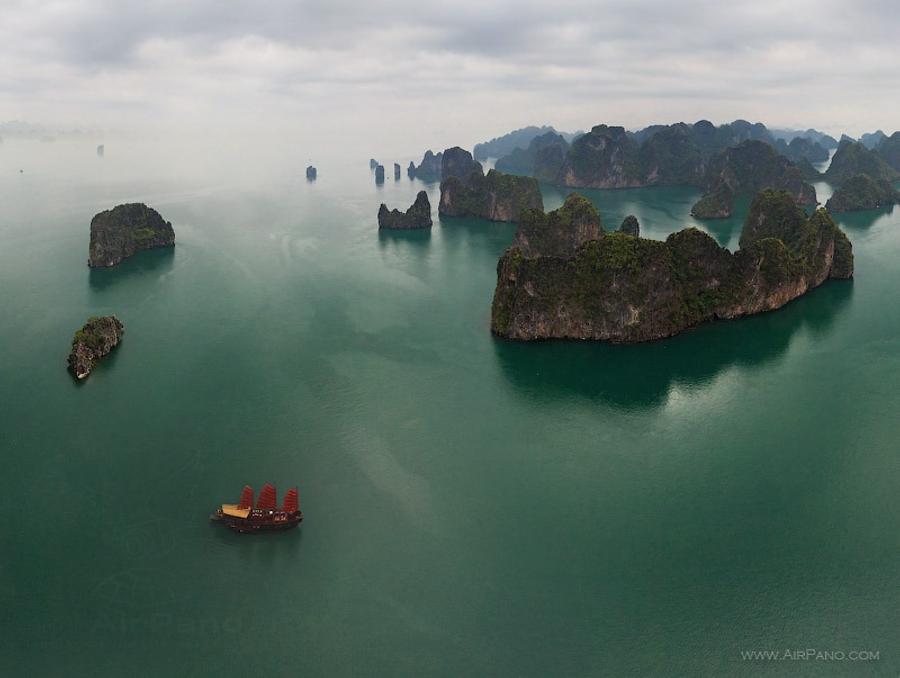 The boats vary in size and occupancy. The smallest one (they are really not that small) can take only 2 passengers and a crew. A larger boat can take 20 to 140 people. What a "cruise ship"! We didn't want a crowd, so Dima was looking for a small boat for two. Those type of vessels are usually reserved for newly weds, so it was very hard to find accommodation with separate beds. Well, Dima found it

After a short preparation, we finally sailed out of Hon Gai port and set our course to the Halong Bay. I was slightly disappointed by the fact that famous scarlet sails of all junks were a fake. However, every time we needed the bright spot in our photo, our captain asked nearby boats to open the sails and they did.

A two-day boat trip includes caves, sea kayaking, visit to the floating village and romantic dinner for two on the uninhabited island. Highly recommended! You won't be disappointed.

However, the main attraction of this trip was a sight of thousands rocks of all shapes and sizes, emerging from crystal clear ocean water hundreds of meters high.

We invite you to fly with us over this natural wonder!

It goes without saying that Halong Bay is main and most beautiful landmark of Vietnam. To tell you the truth, there is a story or a legend about every corner of Halong Bay. This is why it's time to stop reading and turn our eyes to the legendary Dragon legacy, famous natural wonder of Vietnam from a bird's eye view.