Everyone in the Western world is familiar with the "spring roll" (or "egg roll") served in every Chinese restaurant. When you order it, you get a little kind of "cushion" omitting some steam if you dig into it. And then you hit the cabbage. And this is supposed to be a chinese/vietnamese spring roll??? Certainly not. It just happens to have the same name.

Genuine vietnamese cooking is still little known in the Western world. Yet it offers a large selection of rather unique and tasty dishes. Of course there are influences from neighbouring countries. One can notice the influence of China, of Cambodia, of Thailand, and some remnants of the former colonial power France.

Spring rolls are particularly important in high quality cuisine. In the South they are called chà gió, in the North nem rán. They are much liked as starter. Since proper preparation is complicated and cumbersome, even Vietnamese usually eat them in restaurants or buy them already prepared.

The spring roll consists of rice-paper that is prepared from a thin layer of fairly liquid mashed rice on a very hot plate. It then is filled with shrimps, pork, mushrooms and vegetables.

Typical seasoning is done by using the delicate fishsauce Nuoc mam that is also used instead of salt. The outside layer of the spring roll is very thin so that one may have the impression that the roll has only one side. Spring rolls are deep fried but are also offered as type of salad.

The pictures below, all from Professor G. Jontes "Bilderflut" (Flood of pictures) show the process of making rice-paper. 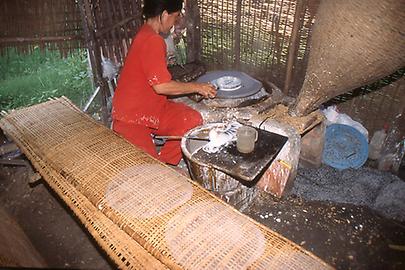 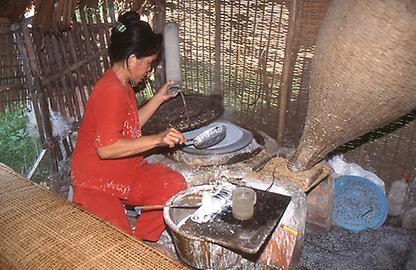 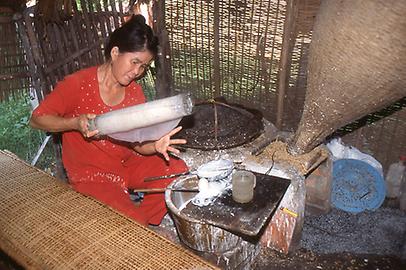 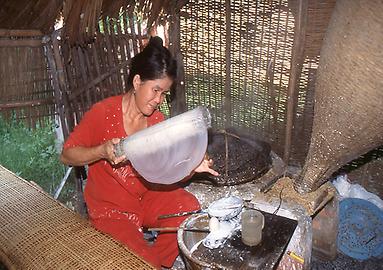 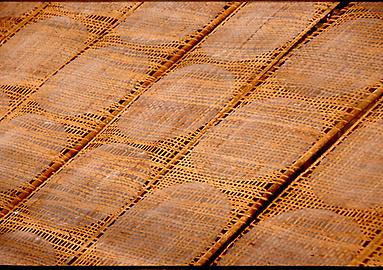 Foto: G. Jontes, unter CC BY 4.0
To German version of this essay.