We have been filming Dubai three times for the last several years. And each time the results astonished us with the range and beauty of the metropolis that used to be a desert.

The virtual tours over the city have been watched more than 5,5 million times. Today we decided to show you the glory of the modern Dubai architecture and picked the most interesting spherical panoramas out of each project.

The origins of Dubai trace back to the VII century, however few people associate the largest city of the United Arab Emirates with ancient times. Dubai is best described as "the City of the Future": nowhere else on the planet you will find so many incredible architectural constructions that are ultra-modern and even ahead of our times. 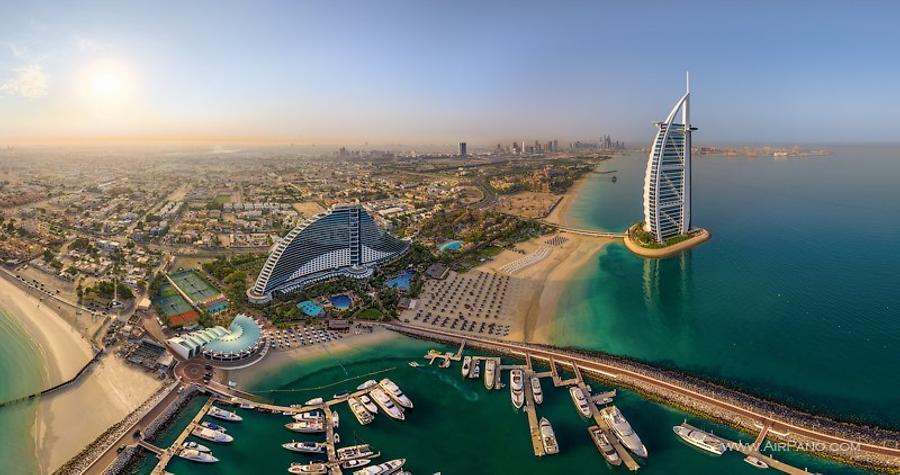 Here is just a short list of Dubai's attractions: Burj Khalifa skyscraper that looks like stalagmite or a desert flower with thin petals; Seven-star Burj Al Arab hotel, shaped like a sail, rises on a special artificial island (hotel room prices at Burj Al Arab start from one thousand dollars per night!); 150-meter musical fountain that lifts 83 thousand liters of water up in the air while performing Arabic and international musical hits. Breathtaking group of artificial islands: Palm islands (a gigantic tree built off the coast of the Persian Gulf) and World Islands, shaped as the Earth's continents. 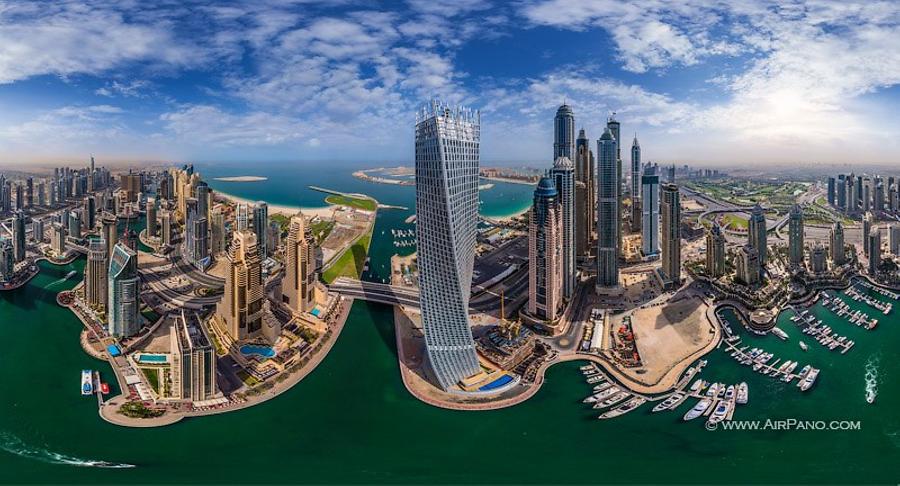 All this is just a beginning! Besides its attractions, Dubai is known as a shopper's heaven. The largest shopping and entertainment center in the Middle East — "Dubai Mall" — also features one of the world's largest aquariums. "Dubai Marina" is the largest and the most exclusive yacht harbor in the world, and the length of Dubai airport has beaten all its competitors a long time ago. 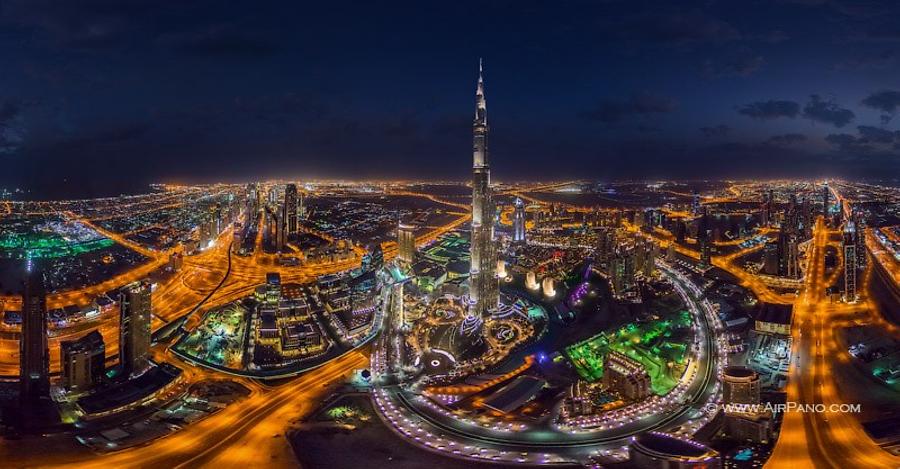 Note: all interesting things in Dubai either hold a world-record title in size or are pioneers in its areas. Sometimes, both things are true. For example, Ski Dubai, the indoors ski resort is not only the largest in the region, but the first one in the entire Middle East where one could enjoy skiing. One can enjoy skiing in the midst of 30 degree heat in the center of the desert — isn't it impressive? This is exactly what Dubai intends to do: to surprise, impress and bewilder with its novel ideas. 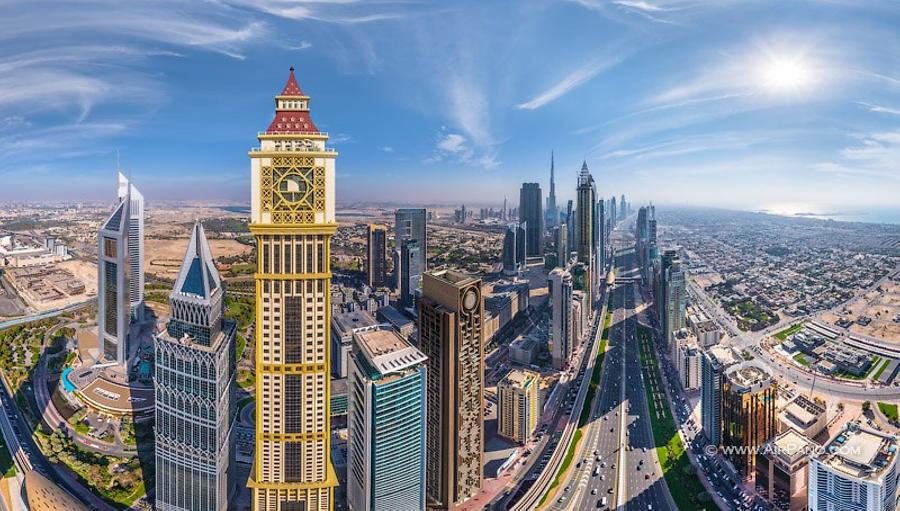 Even the weather in Dubai participates in this race for the "best of the best" title. Due to its average temperature of 35,5ºC, Dubai is one of the hottest cities in the world. Finally, beaches of Dubai have made this emirate one of the most popular resorts in the world. 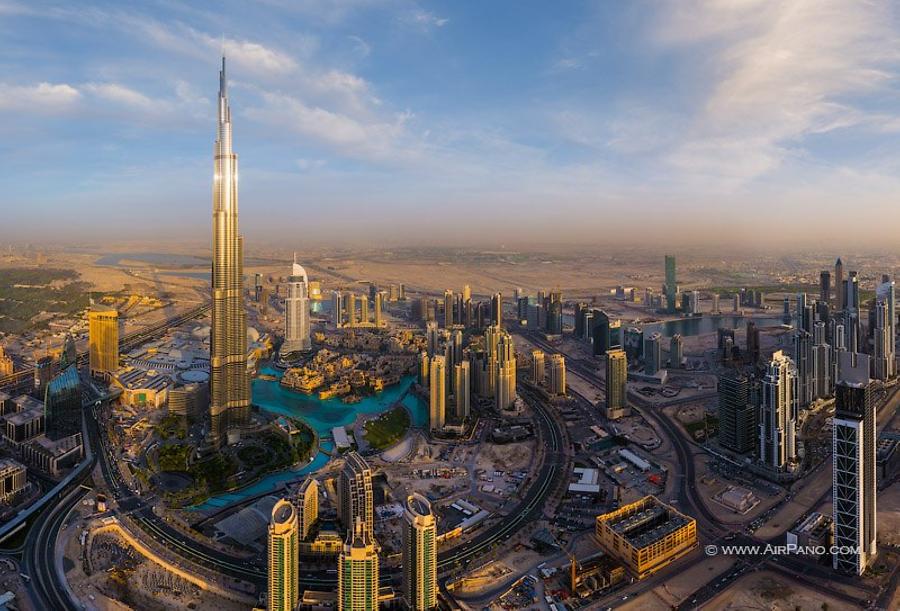 Turning back to its history, a long time ago Dubai started out as exporter of pearls, but at the end of XX century it couldn't afford to act on such a small scale. Nowadays the Emirate holds a leading position in gold jewelry manufacturing, and gold prices in Dubai are such that very few can resist the temptation of bringing home half of a suitcase filled with jewelry made of this precious metal...

In short, Dubai is a paradise city, a page from a science fiction book, a true picture of how even the most bizarre and ambitious ideas may be implemented into reality. We hope that the panoramas and photos of Dubai will transmit the incredible greatness of the unique and the most famous city of the United Arab Emirates.

Photographing Dubai is always a pleasure. Everything about it is crystal clear and straightforward: here's the tallest building in the world; there's Marina, and then there's The Palm, the sail-shaped hotel and several clusters of high-rises within an old city and several beaches...

It is very easy to find time for a photo session in Dubai. Dubai is one of the world’s biggest airport hubs so if you are flying to Australia, for instance, make sure to buy tickets with a stopover in Dubai; and just like that you will have a couple of days at your disposal — A couple of days to take nice walks and do a little shopping and flying (if the weather permits).

By now, I've already flown above the city by helicopter twice, and our website has published two tours. Yet, this type of photography does not allow the photographer to capture everything in detail, to study elements, or to go down below and come out from between structures.

It would be more convenient to go there with our drone (a radio-controlled helicopter). However, considering the fact that I was not allowed to open even the helicopter window without a paper from the police, we assumed that our flying device would definitely arise interest and objections from the local authorities and security services.

Therefore, when we finally planned to photograph Dubai and Abu-Dhabi with the drone, we asked World Wide Web for help with obtaining the required permits.

To our relief, several people responded to our cry for help. One of them was Mirjana, who was working as a media producer in a large media company in Abu-Dhabi. She was key to organizing our shooting in the UAE –making sure every piece of the puzzle / paper is in place. 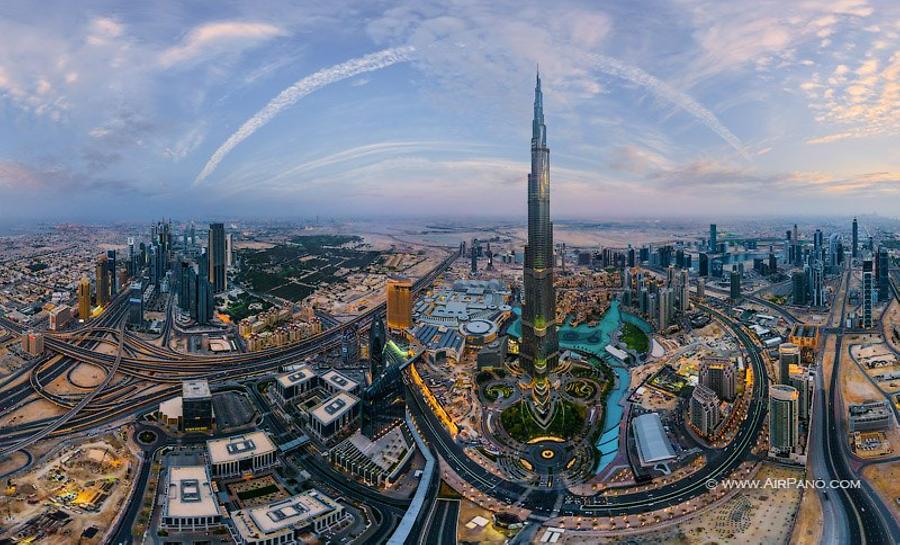 In the beginning, we had no idea how big of a puzzle it was — it took us many hours to fill out all the applications, determine exact shooting locations perimeters, provide specifications of our equipment. All the papers were submitted, all payments made and passports scanned long in advance. And we did not know if we would get the permits for shooting until the last minute. The joyful message arrived right before our flight: We got lucky! We did receive the permit to photograph Dubai! However, as Dubai shooting locations are strictly divided in several categories, with different and some very high fees to pay, our permits were for photographing in public places, which is a rather limited number of locations.The rest was a matter of organization: Mirjana would pick us up before dawn, we would choose a starting point of shooting, and then we would shoot, shoot and then shoot again.

It was disappointing that the tallest building in the world, Burj Khalifa, is not considered a public place; so we could not fly our drone around and above its musical fountains at the base of the building. The cost of the permits to photograph Burj Khalifa is several thousands of US$ per day, Burj Al Arab, the sail-shaped hotel, charges about the same amount of money for photographing at its location. 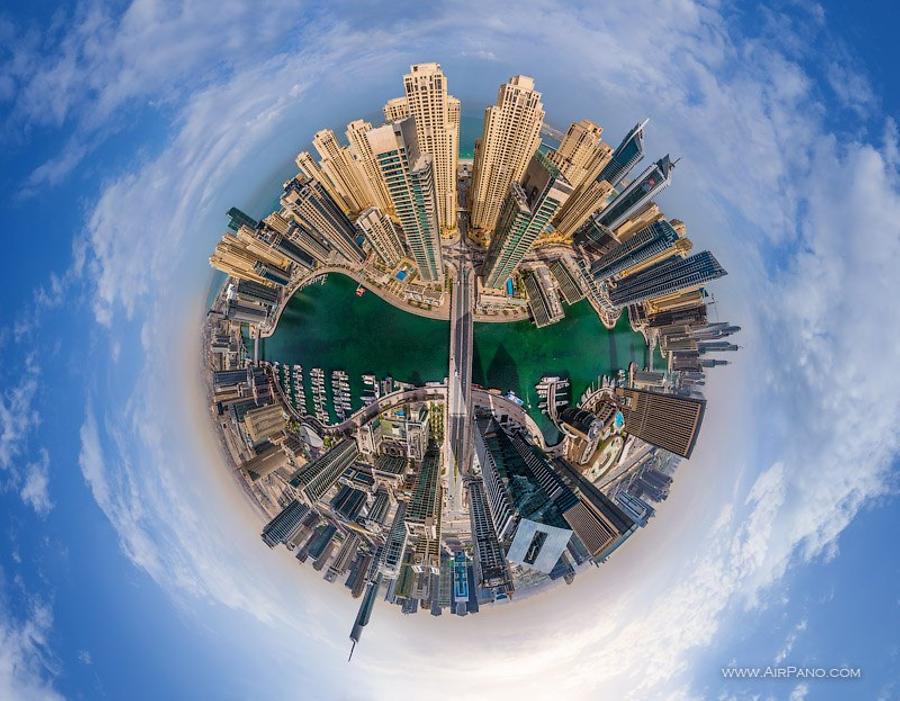 It is strikingly different from the reception of our crew in the adjacent emirate of Abu-Dhabi, where we were not only allowed to photograph the best hotels and locations, such as the Emirates Palace and Etihad Towers, but we were also offered to stay in these hotels so that we could plunge into the atmosphere and later share our photographs.

Abu-Dhabi is the capital of the United Arab Emirates, and it has completely different feel from Dubai. Firstly it is an island-city and it is a planned city – with a grid street system, just like Manhattan, it is very easy to navigate around it. Abu Dhabi main island is surrounded by many little islands that are being developed into amazing new industry specific quarters – cultural district, business district…. Being a capital of the UAE, Abu Dhabi has numerous palaces and governmental institutions around the city, which explains the vigilant security. In fact, at any moment, someone important can be flying by in a helicopter.

According to the procedures described in our permit, we were required to request a corridor from aviation dispatchers for each takeoff. We have never experienced anything like this before. Our shooting locations were predetermined and logged in the air traffic systems well in advance. We would dial the "tower", give our coordinates, and ask for a certain altitude. We would be given permission to fly for 10-15 minutes, or we would be asked to wait and call back while somebody of importance would fly by not too far away. Once we get go-ahead, we would launch our drone and do some photo shooting. Then, the corridor would be closed in the same manner: with a phone call to a tower. 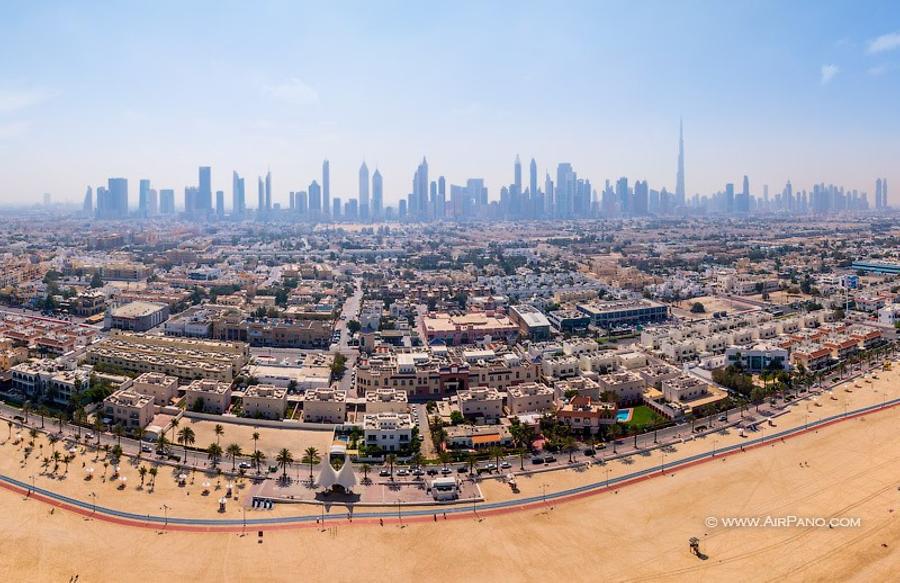 We were very excited about having a wonderful opportunity to shoot all over Abu Dhabi with almost no restrictions. The only exception was the outstandingly beautiful, snow-white Sheikh Zayed Grand Mosque. We did not get aerial permit but we were allowed to shoot it from the ground. So I came back several times there to see it in every light of the day and spent a considerable amount of time admiring this work of art and trying to capture its beauty in the panoramic photos. Now that our photos are published, we see how much of the charm the portrait of Abu Dhabi looses and we hope that we will be given the privilege to film Sheikh Zayed Grand Mosque in its entire beauty next time we are in the UAE. 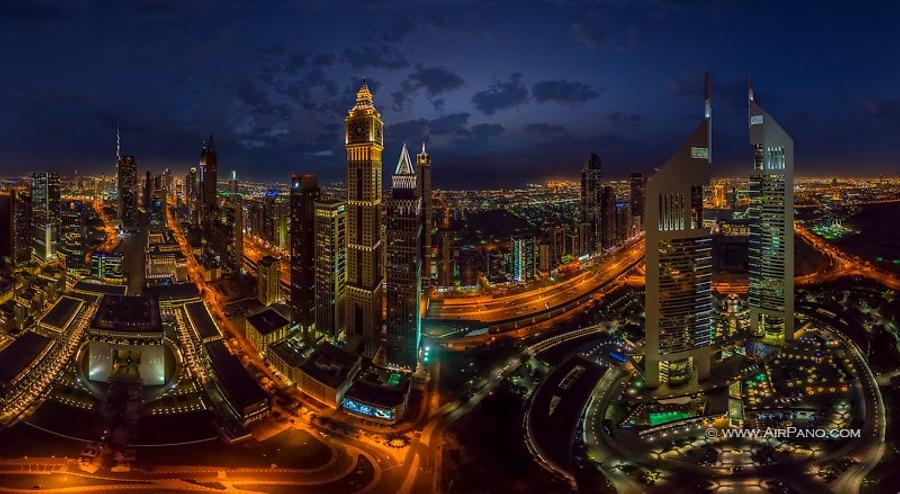 Filming in Dubai and in the UAE was great collaborative effort of numerous authorities, companies and media enthusiasts. AirPano team is very grateful to all for their kindness, perseverance and support.

and our most sincere appreciation and gratitude to our Emirates production crew: Mohammad Fathii and Ahmed Al Kaabi for making this production possible.