The clever wolf and the nine stupid wolves# 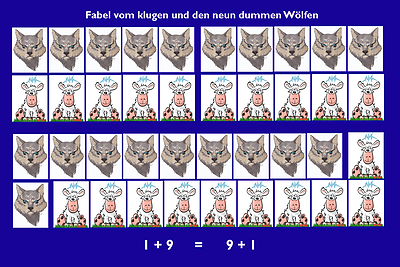 The Sumerians had already schools (called "board-rooms" !) where they taught astronomy and mathematics, two sciences well developed by the Sumerians.

Arithmetic was taught in ingenious ways as the probably oldest fable of humanity indicates. The fabel and the accompanying text were found on one of the cuneiform tablets dating back some 5.000 years!

The story is about one clever and nine stupid wolves.

The ten wolves manage to enter the stable of sheep and get away with ten of them. The clever wolf suggests to split the loot so that he as leader gets a bit more, but all the others the same amount. Giving one sheep to each of them would mean that the leader is treated like all others which does not seem to be fair, all wolves agree. So the idea the clever wolf offers is to split the ten in another way: Giving one sheep to the nine wolves, and the rest to the leader. I.e. all get the the same, the leader "a bit" more. Sounds fair, agree the stupid hungry wolves and start to tear up the one sheep given to them. While they are feasting, the clever wolf removes the nine sheep that are left for him.

The story is supposed to show the commutative law for addition, i.e. 1+9 has the same sum as 9+1!

By the way, it seems to show that also humor entered education already at those times!