It was a happy coincidence that led the AirPano team to the island of Sakhalin. Initially, we had a shoot scheduled in the Kuril Islands, but that summer we created a TikTok account and there was "Tourist Information Centre GoSakhalin" among our followers. As soon as they saw our posts, they contacted us. We could not ignore such a wonderful offer: we were invited to visit the most picturesque places of this island, supported by the official tourist office, and all that at the most favourable time for a photographer! Of course, we accepted this invitation. 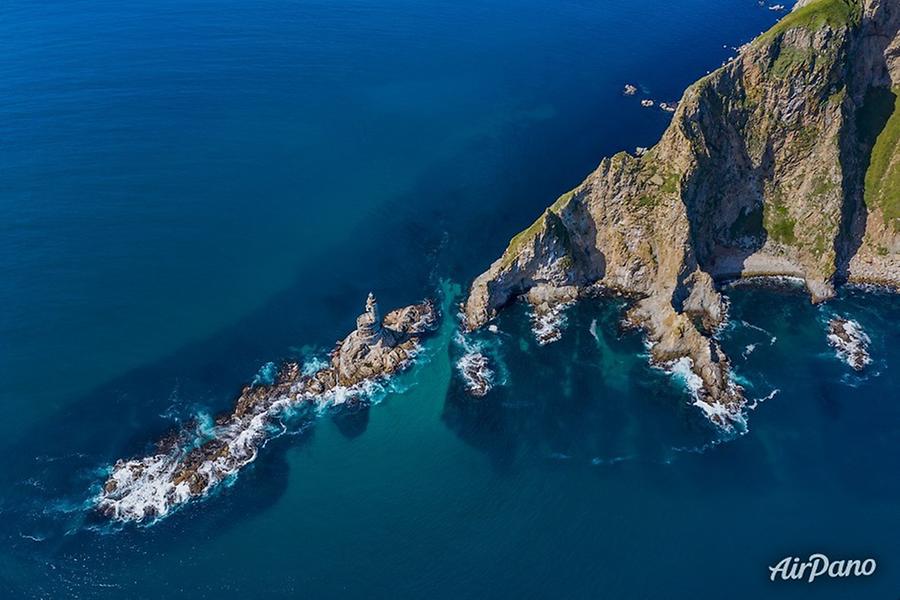 It is not so difficult to reach Sakhalin, as it seems. The airport of Yuzhno-Sakhalinsk connects this part of the Far East with many other significant cities of Russia. It is a good starting point to many natural landmarks, but the city itself is interesting in its own way. On all sides, it is surrounded by mountains and located within the earthquake zone. That's why there are no skyscrapers, but all the buildings, both modern and historical, look charming and well-maintained: the city is proud of its heritage. Probably, the most famous architectural landmark of the city is the mansion of the Sakhalin Regional Museum. Constructed in 1937, this Japanese building is the only example of the traditional architectural style called teikan yoshiki not only in Sakhalin but in entire Russia. 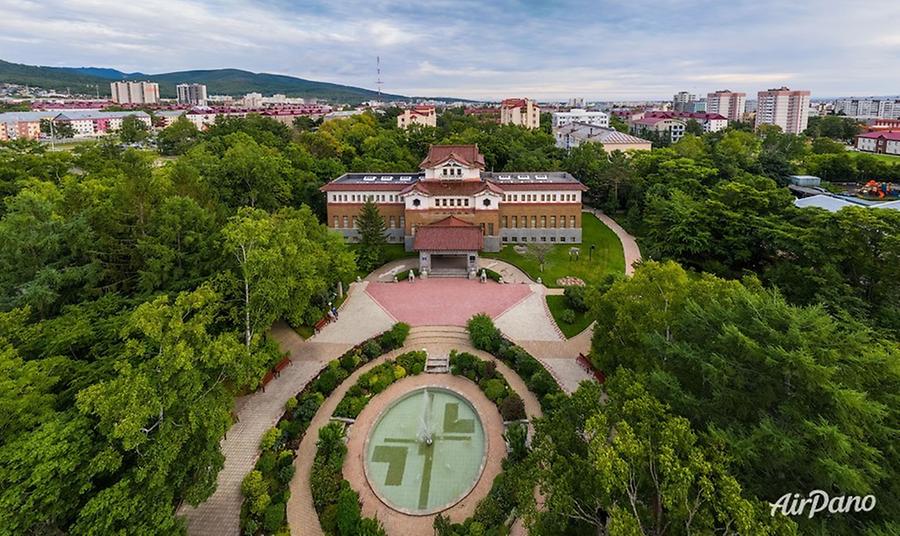 Still, the most interesting places of the island are, practically, in the middle of nowhere: the places that are hardly accessible. It is not enough just to rent a car, you will also need a tent, boat, burner, rainfly and many other things. But you don't have to bring it with you from Moscow or even buy at the spot: it is much more convenient to use the services of the Sakhalin tourist firms. The local experts with the needed equipment who know all the up-to-date realities can bring you to the most secluded places. 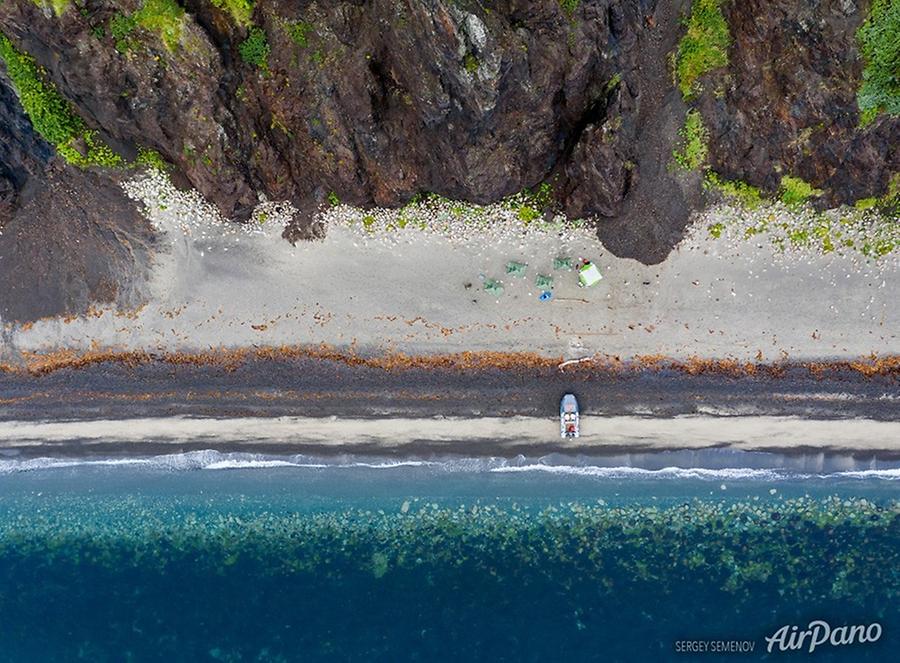 The only thing they can't guarantee is the weather. In that regard, we were extremely lucky to capture the lighthouse of Aniva located at the far southeast corner of Sakhalin. This marvellous historical and engineering monument harmoniously coexists with the surrounding landscape. But for us, it appeared almost entirely wrapped in clouds. We camped at the foot of the lighthouse, but our humid drone could hardly fly and cameras quickly turned wet. For a couple of days, we enjoyed this outdoor recreation and freshly caught fish but afterwards, we decided to move to our next destination: there was no time to lose. 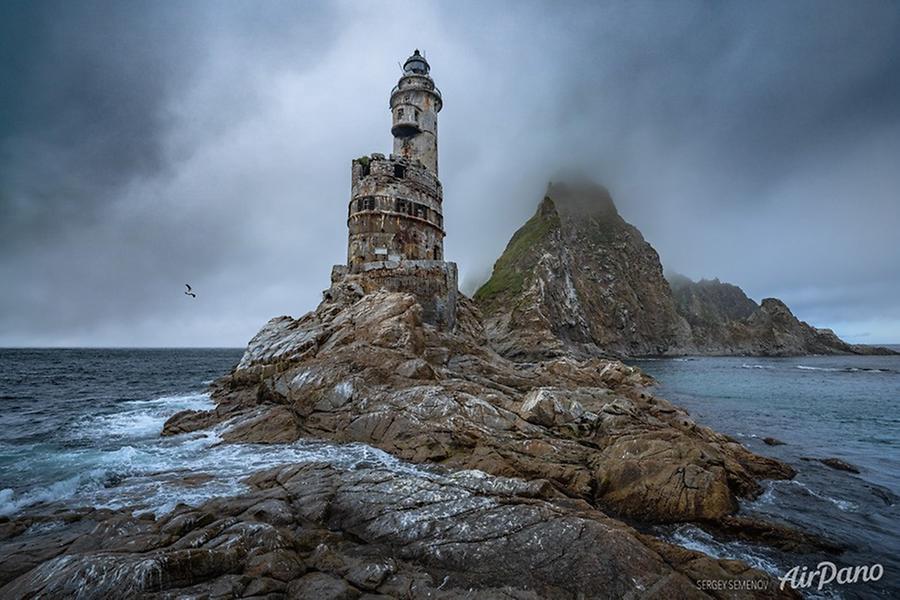 We managed to capture the lighthouse only at the second attempt when we returned there again. And this time, we stayed overnight within its walls! But when it came to Cape Evstafiya, the very first try was lucky for us.

The picturesque bay found itself at around 30 km inland, and the very way from the lighthouse is an adventure with absolutely incredible impressions. The route runs through the coast of the Aniva bay: the isthmus between the mountains has a subtropical weather pattern and dense coniferous and deciduous forest with essentially gigantic burdock. The cape rising at 50 meters can offer an enjoyable panoramic view of the breathtaking landscapes, while at its foot there are small oddly-shaped cliffs created by waves.

Another interesting landmark of Sakhalin with its own unique history is located nearby: Blue or Turquoise lakes. At the beginning of the 20th century, the nearby village of Novikovo was a coal mine. But later, in the 1960ies, an ore containing rare metalloid element germanium (Ge) was found in this field. It is a perfect semiconductor highly demanded in the production of transistors. The reserves of this element had run out until 2005; afterwards, empty careers filled up with ground- and rainwater. This water is still saturated with the by-product of the development, thio-acid salts, colouring the water in bright blue. 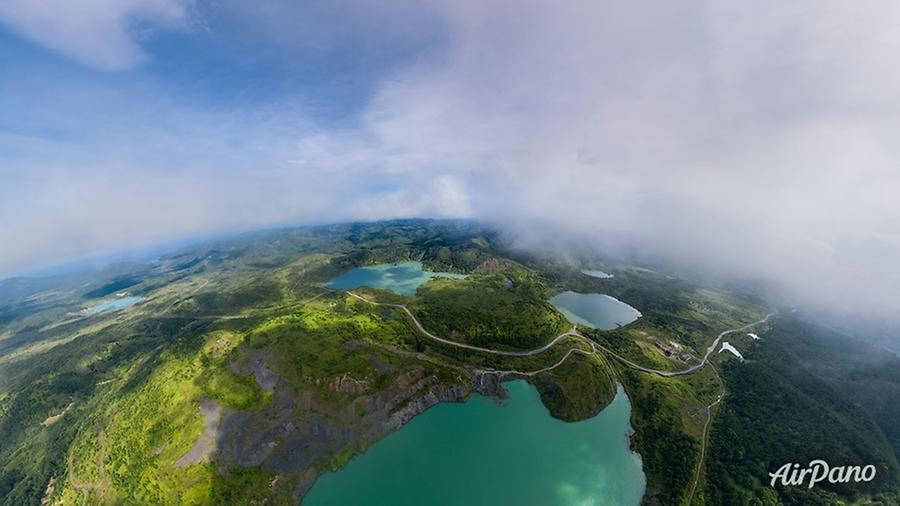 And this is just a small part of what we saw in Sakhalin. We hope you enjoyed this AirPano tour! In the meanwhile, the further virtual tour will be dedicated to our following destination, the Southern Kurils.

AirPano team would like to express our gratitude to Romanov Oleg Gennadevich, director of the Tourist Information Centre GoSakhalin, and the staff of Aniva Tour and Adrenalin Tour companies for assistance in the shooting process.