Yaroslavl has a very special place among other cities of the Golden Ring of Russia. It is one of the first cities on the Volga River mentioned in chronicles — as early as 1071. The most ancient settlements on the territory of the city are dated the Neolithic age. Scientists found different attributes on these lands: scandinavian weapon, runic inscriptions and the biggest in the Northern Europe treasuries of arabic coins. It means that being situated on the place of confluence of the rivers Volga and Kotorosl, the settlement was on the main trade ways. Over the succeeding years the settlement had fallen into decay, and was reborn as a city later in the 10-12th centuries during the reign of Yaroslav the Wise.

Monastery of the Transfiguration of the Saviour

The foundation of the Yaroslavl Kremlin was laid on the place protected from three sides by steep high banks of the Volga and Kotorosl rivers and Medveditsky ravine. This Kremlin, sometimes referred as ‘Wooden Town', is a triangle fortress situated directly on a river spit. It is the actual heart of the city, that is where the history of Yaroslavl began. However, sometimes the Monastery of the Transfiguration of the Saviour is mistaken for the Yaroslavl Kremlin. So we shall start our story with it. 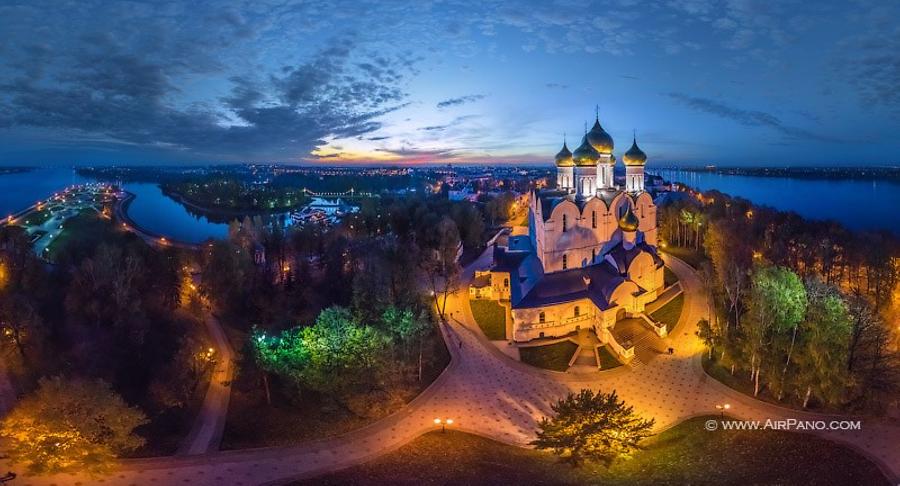 This abode played a very important part in the history of Yaroslavl as it was the religious, cultural and economic center for a long time. Several architectural monuments of the 16th-19th centuries and 16th-century frescos remained on its territory. This is the place where The Tale of Igor's Campaign, the greatest monument of the ancient Russia, had been found.

The monastery was founded in the 12th century. It was situated outside the city of that time near the ford of the river Kotorosol and occupied angular position in the urban fortification system. The main Cathedral bearing the same name was created as a part of the Monastery in 1224. In the beginning of the 16th century the abode was dramatically damaged by a fire and many buildings of the monastery had to be built anew. But the Cathedral of the Transfiguration of the Saviour has remained till nowadays and presently is the most ancient building in Yaroslavl. 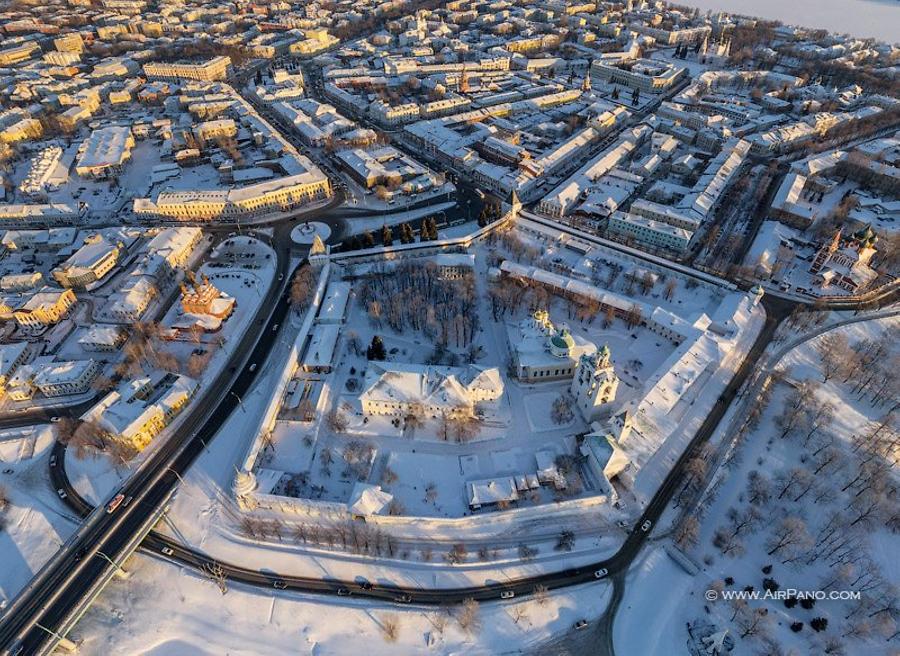 Monastery of the Transfiguration of the Saviour

At the Time of Troubles (1598-1613) the monastery stood a siege, was rebuilt and during the subsequent years continued to grow and strengthen. By the end of the 17th century the walls of the Monastery of the Transfiguration of the Saviour were 820 meters long, 10,5 meters tall and 2,8-3 meters wide. The walls and towers of the monastery were well armed: there were 15 big and 17 small arquebuses, 97 carabines and 14 barrels of gunpowder. The abode owned significant territories and had an influence on social and domestic life of the city. 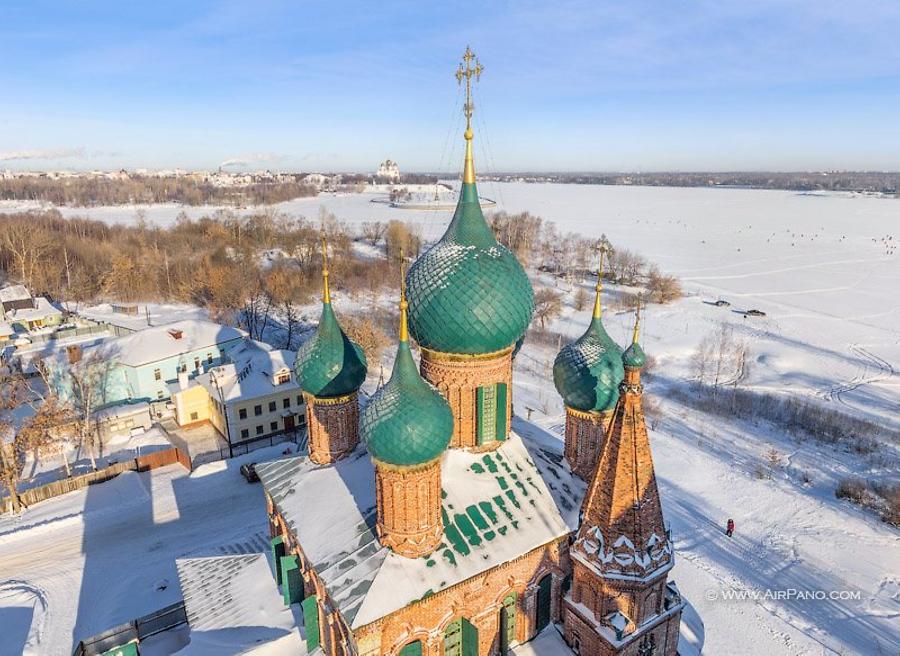 Church of St. John the Chrysostom

The present appearance of the monastic ensemble includes more than a dozen monuments of historical importance. These are a gate, a belfry, buildings for different purpose, towers and cathedrals. The most recent monument of the complex is a funny one: it is the Monument of the Kopeck of the year 1612 installed in 2013 which has the measure of more than one meter in diameter. The aim of this monument is to preserve the memory of the temporary mint that was issuing funds for civil defence forces headed by Minin and Pozharsky.

Nowadays the territory of the Monastery is the base for the Yaroslavl State Historical, Architectural and Cultural Museum-Preserve. And the whole historic center is inscribed by UNESCO as a World Heritage Site.

So now we shall mention again the genuine Yaroslavl Kremlin, ‘Wooden Town'. Naturally, its wooden buildings could not survive till nowadays. In the end of the 17th century they were destroyed by a large fire raging in the city. After that the ‘Wooden Town' was built anew out of stone, but, unfortunately, it was out of luck again. 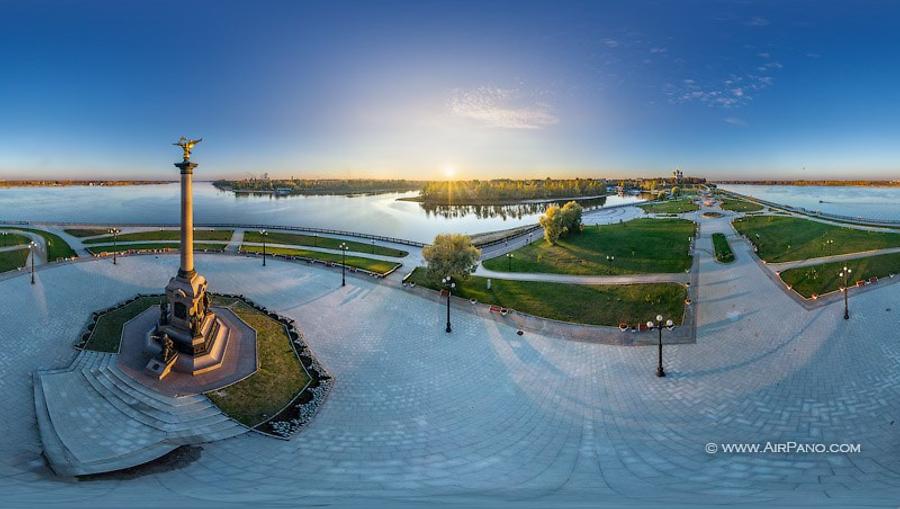 Monument to the 1000th anniversary of Yaroslavl

In the 18-19th centuries some of the cathedrals and buildings, that were a part of the Kremlin, were demolished due to dilapidation. But the greatest damage was yet to come as a result of revolution and the following struggle against religious heritage. By the end of the 20th century the historical ‘heart' of Yaroslavl, deprived of architectural and semantic accents, was rather deserted. Only two of six cathedrals remained on its territory: the Church of Nicolas Wooden and the Church of Illya and Tikhon. But in 2004 reconstruction of this historical place began and the Assumption Cathedral was built from scratch, though its appearance turned out to be slightly different from its predecessor. 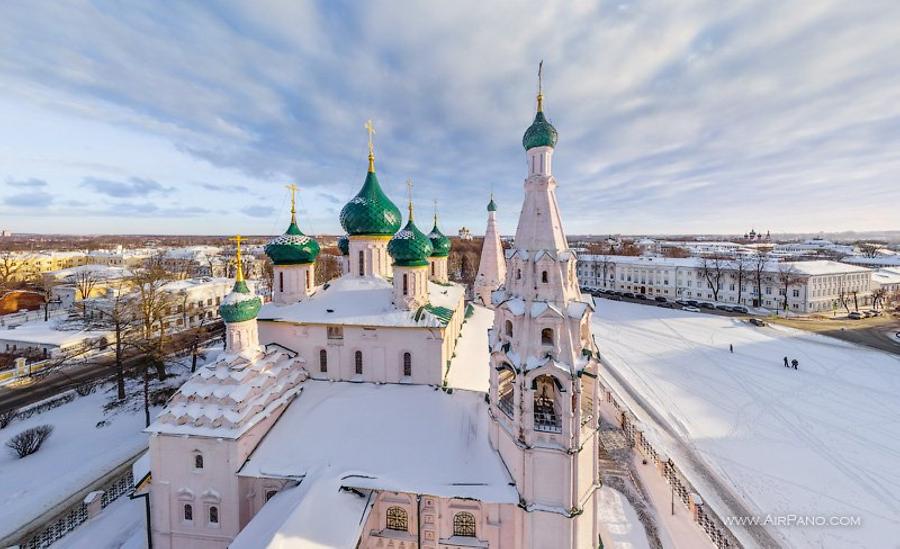 Church of Elijah the Prophet

Catherine the Great played a very important part in the creation of Yaroslavl's appearance: in the 18th century she carried out an extensive town-planning reform guided by the rationalistic ideals of the age of Enlightenment. As a result, Yaroslavl became a model of town-building for other cities of the Russian Empire to follow. 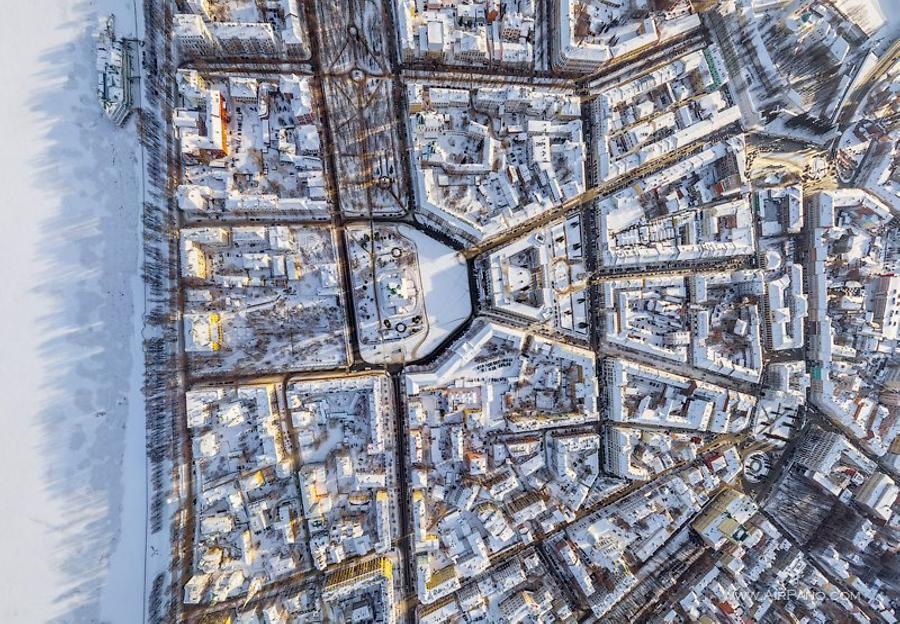 Above the Sovetskaya Square

Nowadays the historical center of Yaroslavl is an architectural ensemble where monuments of different centuries are in harmony with each other and untouched by the modern ‘boxes'. The International council for saving monuments and sightseeings while recommending Yaroslavl to be included into the list World's Heritage list, also noted the regularity of the rhythm of the range-building plan. Two— and three-storey buildings form wide and ‘green' streets which lead to spacious squares. Numerous cathedrals and towers serve as visual and composition dominants. The banks of the Kotorosl river and its islands remained intact; the riverside station built in 1980ies does not interfere your visual perception. Even in the ‘buffer area' the height of new buildings does not exceed 14-17 meters making it possible to preserve carefully all the architectural and historical complex of such an outstanding Russian city as Yaroslavl, so you have an opportunity to make a fascinating journey to this city right now.